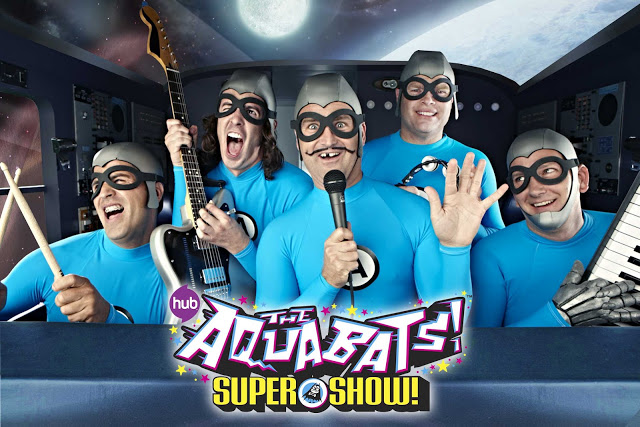 PREPARE FOR AWESOMENESS WITH THE WORLD PREMIERE
OF ‘THE AQUABATS! SUPER SHOW!’ON THE HUB TV NETWORK MARCH 3

Co-creator of “Yo Gabba Gabba!” Executive Produces and Stars
In New Hybrid Live-Action / Animated Series Unlike Anything Else on TV!

The Hub TV network, a television network for kids and their families, will premiere the all-new, action-packed series “The Aquabats! Super Show!”  from the co-creator of “Yo Gabba Gabba!” on Saturday, March 3 (11 a.m. ET, with encore performances throughout the week). The outrageous new series follows a popular alternative rock band as they embark on a never-ending quest to right wrongs, destroy boredom and seek justice for all in an inventive blend of live-action and animated crime-fighting spoofs.

Executive Producer Christian Jacobs (co-creator, writer, and director of “Yo Gabba Gabba!”) is the band’s lead vocalist and plays the team’s fearless leader, The MC Bat Commander.  Also in the cast are fellow founding member and bassist Chad Larson (aka Crash McLarson), keyboards and sax player James Briggs (aka Jimmy the Robot), drummer Ricky Falomir (aka RickyFitness) and the most recent member of the band, guitarist Ian Fowles (Eagle“Bones” Falconhawk).

Since their debut in 1994, the Orange County, CA-based band has won over legions of music fans with their music and are well knownfixtures at music festivals including Coachella and South by Southwest (SXSW).  The band has released five full-length studio albums including their latest, award-nominated “Hi-Five Soup” and has toured internationally.
In addition to the network’s target audience of kids 6-11, and because of the band’s deep roots in music, The Hub TV network plans to support the series launch with extensive marketing and digital campaigns also aimed at parents and music fans.
“TheAquabats! Super Show!” will be supported by traditional and non-traditional off-channel media designed to drive sampling of the wildly original series.  Partnerships include support through comic book retailers, independent record stores and online music/humor outlets.
Additionally, the network’s website https://www.Hubworld.com will host a variety of interactive and engaging “The Aquabats! Super Show!”-themed activities surrounding the series premiere.  Beginning February 23, Hubworld.com will celebrate the arrival of the Aquabats with a distinctive new show page and an all-new action game, “Aqua-Battle!” Increased promotional support will begin on Monday, February 27 featuring a dynamic home page takeover that includes a mix of video and animation that captures the Aquabats unique brand of humor.
Facebook and Twitter (@HubTVNetwork) followers will also be able to extend their viewing experience online through clips and images teasing the premiere of the series as well as exclusive content, short form videos, and direct cast interaction.
About FremantleMedia Enterprises’ Kids & Family Entertainment
FME Kids & Family Entertainment division was founded in 2009 and has quickly become a worldwide leader in the family entertainment business.  With 12 titles in production in collaboration with top producers on four continents, FME Kids & Family Entertainment is already one of the most prolific independent producers and distributors of content in the sector today. Its growing portfolio of content spans across four key genres: preschool, kids comedy, action/adventure and tween/teen fare. FME Kids & Family Entertainment is bringing to networks around the world innovative and exciting shows for television and new media platforms in live-action, 2D animation, CGI, stop-motion, puppetry and real-time animation with programming targeting demographics ranging in scope from preschool through high school.
About The Hub
THE HUB is a multi-platform joint venture between Discovery Communications (NASDAQ: DISCA, DISCB, DISCK) and Hasbro, Inc., (NASDAQ: HAS) with a goal of entertaining, enlightening, empowering and educating children and their families.  The cable and satellite television network features original programming as well as content from Discovery’s library of award-winning children’s educational programming; from Hasbro’s rich portfolio of entertainment and educational properties built during the past 90 years; and from leading third-party producers worldwide.  The Hub lineup includesanimated and live-action series, as well as specials, game shows, and family-favorite movies.  The network extends its content through a robust and engaging online presence at www.hubworld.com.  The Hub rebranded from DiscoveryKids on October 10, 2010, and reaches approximately 62 million U.S. households.  The Hub logo and name are trademarks of Hub Television Networks, LLC.  All rights reserved.
To find the channel in your area, please visit https://www.Hubworld.com and check the channel locator at the top of the page.
Visit The Hub on Facebook at https://www.facebook.com/hubtvnetwork