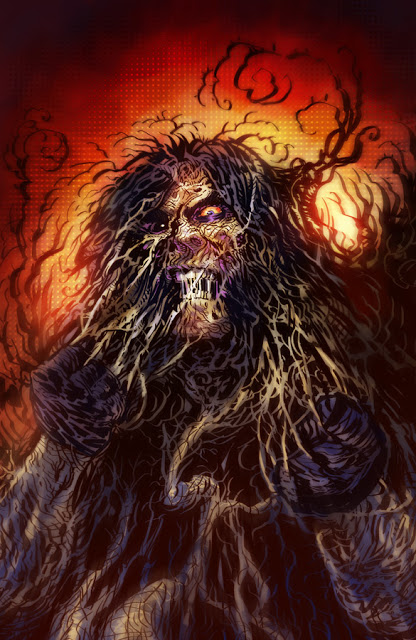 IMAGE COMICS’ MORIARTY TO BECOME A MUSICAL!
Daniel Corey and Raymond Schnurr team up to bring Sherlock Holmes’ arch nemesis to the stage
Announced at the 2012 Image Comics Expo, Daniel Corey is partnering with composer Raymond Schnurr to create a new stage musical based on the Image Comics series MORIARTY, written by Daniel Corey and illustrated by Anthony Diecidue.
Currently titled MORIARTY, the stage musical will be loosely based on the first story arc of the MORIARTY series, MORIARTY: THE DARK CHAMBER. Corey will be writing the story while Schnurr – who is also currently scoring We Can Get It For You Wholesale for Neil Gaiman – will be composing the music. Corey and Schnurr will collaborate together on the lyrics. Like the comic, MORIARTY the stage musical will be a very gritty and dark piece with a sense of high adventure. The music will be based in hard rock, and the staging style will be a cousin to shows such as Les Misérables, Sweeny Todd and Phantom of the Opera.
“I am very excited to be collaborating with Ray on the upcoming MORIARTY stage musical,” states creator Daniel Corey. “Ray is very in tune with the sort of storytelling style and sensibility that Anthony and I have worked so hard to convey with this series. This show will be epic in scale, and Ray’s music will bring that extra level of dynamite that will be sure to knock the audience into the abyss where the Professor resides. It will be a dark journey, but an exciting and entertaining one.”
Raymond Schnurr adds, “When I read MORIARTY for the first time, I was riveted. I contacted Daniel immediately and said, ‘Let’s turn this into a kick-ass musical!’ I am excited to work with Daniel and create a musical as intelligent and exhilarating as his comic book series!”
MORIARTY: THE DARK CHAMBER, VOL. 1 TP (JUL110470, ISBN: 978-1-60706-450-3), a 128-page full-color paperback for $14.99, is available in all fine books stores and comic book retailers (www.comicshoplocator.com).
MORIARTY: THE LAZARUS TREE, VOL. 2 TP (JAN120526, ISBN: 978-1-60706-490-9), a 136-page full-color paperback, will be on sale in stores March 14th for $14.99 and is available to order in the January 2012 edition of Diamond Previews.
For more information, please visit  www.professorjamesmoriarty.com and www.facebook.com/daniel.corey.
About Daniel Corey
Daniel Corey is a director, screenwriter, playwright, and novelist. He has authored screenplays, teleplays, stage plays, two comic series, and a novel. In 2007, Daniel created DANGERKATT CREATIVE STUDIO, a company that serves as an umbrella for all of his creative endeavors. www.professorjamesmoriarty.com
About Raymond Schnurr
Raymond Schnurr is an experienced film composer, music producer, orchestrator and session conductor, working for many prestigious companies including Warner Brothers, Endemol, HBO and Walt Disney Pictures. In addition, Raymond has taken his work to recognized venues like the Hollywood Bowl.
Having studied under respected composers including Lee Sanders, Robert Drasnin and Steven Scott Smalley, he has worked in nearly every aspect of the film music industry: orchestration, music preparation, conducting, and more. He proficiently composes in all musical genres with an emphasis in orchestral, electronica, and orchestral hybrid styles. Raymond works comfortably in the studio creating midi productions, behind the conductors stand, or in partnership with other industry professionals.
About Image Comics
Image Comics is a comic book and graphic novel publisher founded in 1992 by a collective of best-selling artists. Image has since gone on to become one of the largest comics publishers in the United States. Image currently has five partners: Robert Kirkman, Erik Larsen, Todd McFarlane, Marc Silvestri and Jim Valentino. It consists of five major houses: Todd McFarlane Productions, Top Cow Productions, Shadowline, Skybound and Image Central. Image publishes comics and graphic novels in nearly every genre, sub-genre, and style imaginable. It offers science fiction, romance, horror, crime fiction, historical fiction, humor and more by the finest artists and writers working in the medium today. For more information, visit  www.imagecomics.com.