You can’t go wrong with any of these titles.  This time, check out reviews for Real Steel, Drive and Primeval: Volume 3. 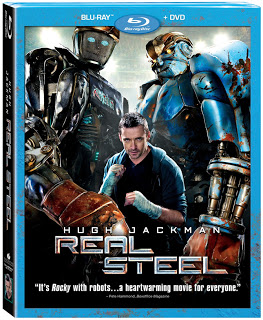 The Pitch
Balancing gritty action and emotional heart, Real Steel is an inspiring and visually stunning film that takes audiences on an action-packed journey. Washed-up boxer Charlie Kenton (Hugh Jackman) scrapes by as a small-time robot-fight promoter as he tries to make a comeback. Against all odds he eventually succeeds—at least in the eyes of his son Max (Dakota Goyo). Real Steel is spectacular family entertainment that will have everyone cheering again and again.

The Review
Real Steel is one of those movies that, going into it, feels like a big, dumb film.  So much so, in fact, that people have said to me on a number of occasions, “Why aren’t they just calling it Rock’em Sock’em Robots The Movie?”

I was more than pleasantly surprised that the boxing robots are window dressing on a story about a wayward father and the son that he’s never gotten to know.  Now, before you laugh, I know you’ve seen this story a dozen times before, but it’s execution in this film works in no small part due to the performances of Jackman and Goyo.

Director Shawn Levy approaches the film with a verisimilitude that is engaging and best of all honest and as a result, has created a truly excellent family film that’s entertaining for all ages.  One of Levy’s brilliant moves is consulting with producer Steven Spielberg and building practical versions of the thirt or so robots in the film.  These are all huge props that are brought to life by a number of talented puppeteers and is not only more realistic, but less obvious and garish then they likely would have been in CGI.  Picture and sound quality are vibrant and stunning as was the entire ensemble which including Evangeline Lilly, Anthony Mackie and Kevin Durand. Extras include featurettes, bloopers and deleted and extended scenes.

Reel Steel is entertaining, charming, emotionally charged and perfect for every member of the family.  Name the last movie that accomplished that?  Highly recommended. 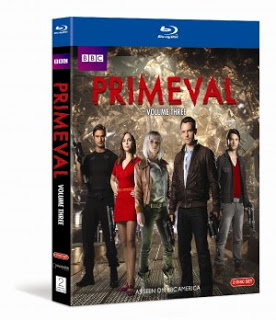 The Pitch
Monster hit Primeval roars back onto the screens for an extended third series. Still reeling from Stephen’s death and with the depth of Helen’s betrayal now revealed, Nick Cutter must fight to re-focus his embattled team. Cutter’s crew are joined by some new recruits in the form of maverick policeman Danny Quinn, sparky Egyptologist Sarah Page, and the new leader of the ARC’s security forces Captain Becker. But as the anomalies continue to present an unrelenting series of threats, the task in hand seems almost insurmountable. It’s not just deadly creatures the team has to contend with, they also face a threat to the future of not just the ARC but of mankind itself. Prepare for more explosive action as Primeval bares its newly sharpened teeth.

The Review
Comprised of seasons 4 & 5, Primeval: Volume 3 is a guilty pleasure of jurassic proportions.

Combining pop science with solid writing and solid special effects, the series delivers a regular episodic creature of the week story with an overall mythology.  And unlike Terra Nova, you see the dinosaurs in this one, as they frequently arrive in present day London thanks to time anomalies, which must be kept secret to the general public.  Extras include webisodes and featurettes.  Primeval is big, dumb entertainment full of conspiracies, scientific mysteries and dinosaurs.  In other words, fun.  Recommended. 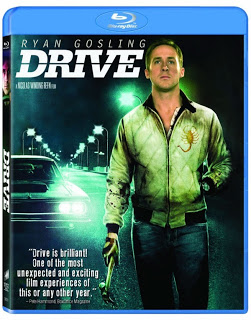 The Pitch
Ryan Gosling stars as a Hollywood stunt driver for movies by day and moonlights as a wheelman for criminals by night. Though a loner by nature, “Driver” can’t help falling in love with his beautiful neighbor Irene (Carey Mulligan), a young mother dragged into a dangerous underworld by the return of her ex-convict husband. After a heist goes wrong, Driver finds himself driving defense for the girl he loves, tailgated by a syndicate of deadly serious criminals (Albert Brooks and Ron Perlman). Soon he realizes the gangsters are after more than the bag of cash and is forced to shift gears and go on the offense.

The Review
In the words of Tracy Morgan, “I love Drive so much I want to take it behind a middle school and get it pregnant.”

Reminiscent of the work of early Michael Mann, director Nicolas Winding Refn has composed an amazing film with both poetic moments of stillness and silence and also explosive violence.  Following the structure of Shane, Drive tackles some very common themes: love, friendship, loyalty, betrayal, revenge and madness and examines them in a fresh and invigorating execution.  THe entire cast delivers distinctive and memorable performances including Gosling, Mulligan, Brooks and Perlman, but also Bryan Cranston, Christina Hendricks, Oscar Isaac and newcomer Kaden Leos.

Extras include some featurettes and an interview with Refn.  Drive is a stylish, cool, hypnotic and unforgettable.  Highest recommendation.