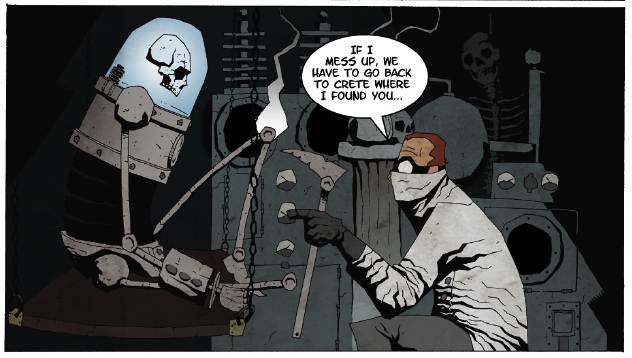 In 1939, something was pulled up from the ocean depths off the coast of Spain; what it was and where it originated from were a mystery to the fishermen who found it, but all the surviving members of that crew agree on one thing~ whatever it was, it saved their lives. Robot 13 tells the odyssey of the hero who awoke from the ocean floor that day as it looks for answers to who he really is…

That’s the premise of Robot 13, a fantastic book by Thomas Hall and Daniel Bradford that is currently soliciting funds on Kickerstarter to republish their first series into a trade paperback prior to launching the next miniseries.

Among the incentives being offered to donors at various levels include original artwork from the comics, custom-made sketches, a glow-in-the-dark t-shirt, mini-figures of R-13 and the company’s other hit character, KING! and several more goodies. The top level prize is the chance for a donor to have their likeness drawn into a future issue… being eaten by a giant monster!

Hall and Bradford are also offering a special incentive for those who donate $13: a copy of the R-13 paperback collection, shipping included.

For more details, support the project via Kickstarter HERE and visit the Blacklist Studios site HERE!

In this article:Comic News, Kickstarter