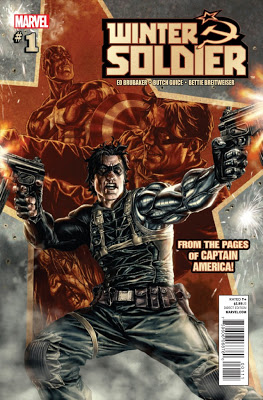 I so did not want this to suck, and man was I extremely satisfied.

Ed Brubaker delivers the good as Winter Soldier is everything we read comic books for. If you are looking for something new or want to stick with the traditional superhero thing, this is the book for you!

“Bucky” Barnes resumes as the Winter Soldier after his fake death in “Fear Itself”. Black Widow joins Barnes as they go undercover to discover the location of several Winter Soldiers that were trained by Barnes and believed to be deactivated.

The art has a sexy and stylish espionage noir similar to Warren Ellis’s run on Secret Avengers. This approach to the series is perfect for these two characters and I expect them to shine like never before. The plot is gritty, dynamic and delivers a pace that will keep you intrigued from start to finish. Some fans didn’t like Secret Avengers because they didn’t connect with the whole spy thing and I understand that.

But please, don’t skip out on this one because it offers so much more.

Besides, I know Lee Bermejo’s bad ass cover had you at “hello”. 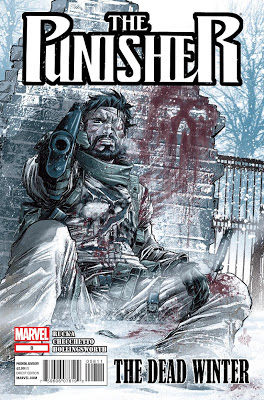 The aftermath of the Exchange massacre is still the primary focus of the current story arc.

The Punisher is waiting in the wings while Rachel Cole is being questioned by police regarding the murders. Exchange leader, Stephanie Gerard, turns to an old acquaintance with the task of taking out Frank Castle once and for all.

Easier said than done but she might have found the one guy with the resources to pull it off.

Greg Rucka pretty much took the month off because it is Marco Checchetto’s artistic talents that tell the story and steal the show.

The characters are so well depicted that you naturally envision the dialog as their emotions are crystal clear. Checchetto is so good that it almost seems like he is showing off.

“Dead Winter” is the perfect name for this issue as the shroud of death has emerged among a cold, dark and snowy New York as things will get exponentially worse before anyone can think of them getting better. 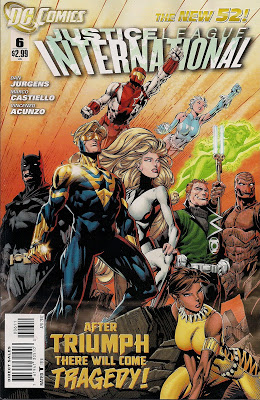 After narrowly surviving their encounter against Peraxxus, the League faces political turmoil from the United Nations as they are determining if the JLI will remain a team.

Booster Gold is convinced they will be disbanded while Batman suggests the team should operate without U.N. sanction if the ruling goes against them. This was fascinating on many levels because Booster proves himself as a leader on the battlefield and now he has to find his footing off of it too.

If you are of the mindset that most politicians are full of BS then you will enjoy the ending salvo of the U.N. hearing as the panel twists and turns the facts until Booster has finally had enough and lays the verbal smackdown on them.

Don’t worry, it’s not all political gobbleygook as the book contains some crime fighting action and tragedy. Jurgens puts it down with some classic storytelling that is a fun read for all.

If you look at the groups of the “New 52”, the Justice League are the varsity team while the Justice League Dark is more of a supernatural special forces squad and Stormwatch is a group that handles the biggest threats under complete anonymity. The world wants a group of heroes they can trust and relate to and this is why the JLI was formed.

They are becoming more than political poster boys now and Jurgens is doing a great job of telling a story about a team finding themselves in the face of adversity. 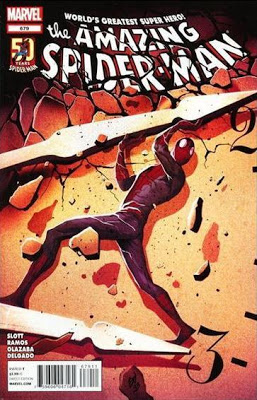 It’s 3:09 pm with sixty seconds left until “Bad Tuesday” destroys Manhattan and Spidey and Grady are powerless to stop it…until Spider-Man realizes the broken watch stopped at 3:10 AM instead of PM.

Not too swift on the part of our two super science geniuses.

Am I supposed to believe they can build a time machine but can’t tell time?

Not really, but look on the bright side, they have twelve more hours to save the city and besides, I can believe forgetting one tiny detail got lost in the stress that comes with preventing a massacre.

Spider-Man goes on a Back to the Future type adventure to make sure he did everything that was reported he did in the” Good Tuesday” newspaper.

After he completes everything that was reported, he swings upon a Symkaria parade hosted by the Silver Sable.

They stumble upon Flag Smasher and his goons setting up a bomb. Enter the classic comic book line when Smasher says he recognizes no state and Spider-Man replies “Have you been to my favorite state? The state of UNCONSCIOUSNESS!” and saves the day.

Still, he doesn’t stop Bad Tuesday and with no options left, he meets M.J. for a bite to eat until something in the conversation brings about a revelation and Peter arrives at the Horizon labs just in time to make Bad Tuesday a thing of the past. The script was convoluted but I still enjoyed it. I don’t know if that’s a good thing or if it makes me weird but at least the art maintained its vibrant nature that has been a staple of this current run. 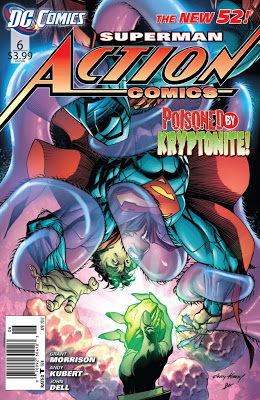 Grant Morrison ended the last issue with the anti-Superman army and the Legion of Super Heroes coming out of nowhere to produce a new story arc.

It was a little confusing but I had faith he would make it work and the confusion would be erased. I was wrong. There is a lot of action and storylines going on from a green kryptonite engine that powered baby Kal-El’s rocket ship to the Legion visiting a childhood Superman all the way to an iron pellet lodged in Superman’s brain.

You can tell Morrison was excited when he put this together as idea after idea fell on to the page.

However, the story is all over the place and there is just too much going on.

In my opinion, Morrison and Kubert’s work usually compliments each other and the art on its own is fun to look at but it was hard to enjoy due to the variety of characters and things going on.

The saving grace of this book is the backup story by Sholly Fisch that shows Clark’s last days in Smallville containing a lot of memories with his parents, Jonathan and Martha in their home on the farm. The entire thing was an emotional roller-coaster that beautiful, sad, nostalgic and promising. 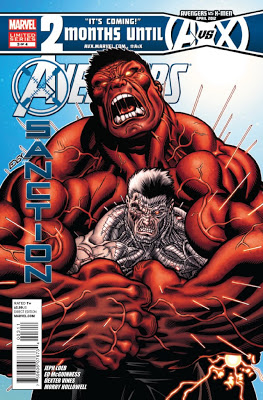 This was a decent effort by Loeb and company.

There was too much sizzle and not enough steak.

Cable has taken out Falcon, Captain America and Iron Man but Red Hulk won’t go down as easy. To complicate things, the techno-organic virus has taken full effect over his body. The events in this story are leading up to Avengers vs. X-Men so in the end, nothing that happens will matter.

Stories like this need to be better than most because you’re being charged $3.99.

The characters at times looked like spoofs of themselves and the last page featuring Wolverine and Spider-Man made me laugh, a lot, instead of the “here comes the Calvary” feeling it should have brought.

Save your money and see what part four has in store in March.