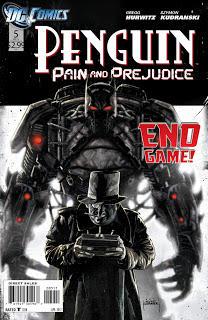 The finale of the Penguin’s character brings out the truth of what kind of man he really is.

Throughout the series, Gregg Hurwitz’s writing makes you feel sorry for Oswald. I mean, how could you hate someone who has beaten and severely tormented as a child and would do anything for his mother and girlfriend?

Hurwitz flips the switch as he reveals the one thing Penguin loves the most and it makes you so mad that you hated him even more than when you started reading the series.

The art and color presents a dark and dingy world which I like to believe it the mental depiction of Penguin’s state of mind. If you’ve read the previous four issues, you don’t want to miss this one.

If you passed on it then please, buy the graphic novel that will be released in a few months. The series has not received a lot of press but I promise you it will be the hidden gem of your collection. 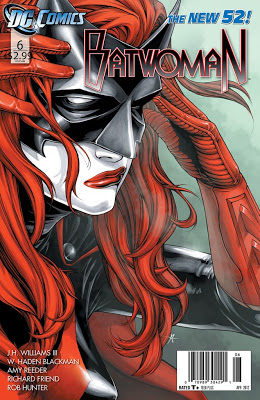 Best Artwork and Best Cover of the week goes to the sixth issue of the New 52’s best series that you might not be reading, but should, Batwoman.

This is a great jumping on point and this issue introduces the reader to all the characters in the series. Amy Reeder stepped in for J.H. Williams and I can safely say she more than held her own. It’s fair to say that the art is the main attraction to this series.

The writing can’t be judged by good and bad or right and wrong;  it’s simply different than anything else in comics today.

There is a two page layout of Kate Kane being bombarded by a plethora of bullets and she is stunned to learn her new Batwoman suit is bulletproof.

There were a lot of cooks in the kitchen on this one and they all helped to produce an exquisite blend of art and story. 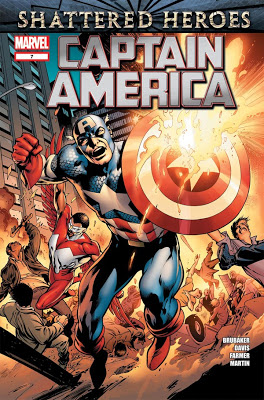 Ed Brubaker is putting Captain America through the ringer as his super-soldier powers keep kicking in and out at the wrong time.

Queen Hydra’s dastardly plot is taking shape and Sharon Carter is concerned that Steve might not recover from his body’s reaction to the serum.

There is one page layout beautifully produced by Davis and Farmer that shows Cap trying some peaceful crowd control during a riot. All of a sudden, he grabs his ribs and he reverts to his pre-super soldier physique and a rioter yells “They are trying to fool us with a fake Captain America. Get him” and boy do they get him.

What’s next for our Star-Spangled hero? The ending sequence will make you come back for more! 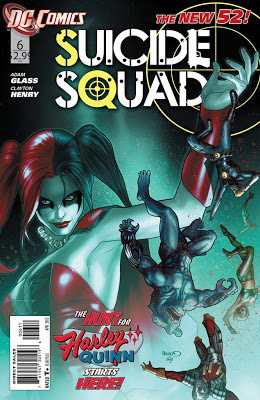 Deadshot and company are hot on the trail of Harley Quinn and shoot her in pursuit.

Their victory is short lived since it was merely an ugly decoy and find themselves in the midst of several decoys they have to battle through. The action is nice but the meat and potatoes revolve around Harley as she is sad since The Joker is “dead” according to Detective Comics.

She recalls her first meeting with the clown prince of crime in her sane days as Dr. Harleen Quinzel when she first met the Joker. This was covered in Paul Dini’s Mad Love but there are subtle changes to their interaction. For example, Harley tells Mr. J “I will kick your nuts up through your mouth and show you how we do it in Canarsie” in response to one of his advances.

I enjoyed Clayton Henry’s work in this issue and especially when the Squad comes face-to-face with what I can only characterize as the transvestite army of Harley Quinn. 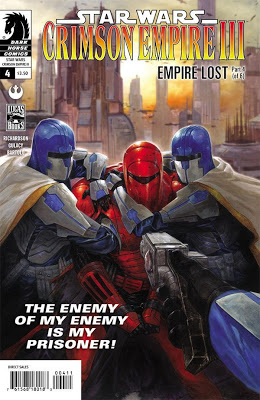 The plot accelerates as Kir Kanos is determined to stop the attack planned by Devian, leader of the Imperial Remnant.

He is so determined, in fact, that he risks capture by the New Republic, you know, the people he swore to slay in the name of Emperor Palatine.

In other news, Han Solo is leading an armada of star ships to a planet Star Wars fans are very familiar with to snuff out Imperial activity. The story was great but the art not so much.

I’m not an art snob by any means but the character depiction was terrible.

There were three different people who could have been Luke Skywalker and only the word balloons clued me in; Han Solo looked lame; Admirial Ackbar has a bright orange tan that would make the Jersey Shore cast proud and Leia kind of looked like Peggy Bundy in a panel or two.

The plot is something you can sink your teeth into but the art takes away from the overall experience. 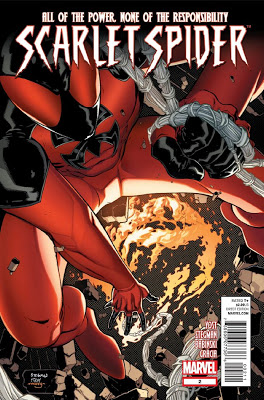 This series had me when I saw that Chris Yost, writer of the amazing Avengers: Earth’s Mightiest Heroes animated series, was writing this title.

He excels at strong character driven storytelling and his is no exception as Scarlett Spider dives into Kaine’s internal struggle with making the right choice or just fending for himself.

Salamander, the issue’s nemesis is a muscle-bound, Fire god who Kaine ends up battling in the finale.

Ryan Stegman provides some fun visuals that depict Kaine not wanting to fight at first because he doesn’t want to be like Peter Parker.

At the end of the day, Kaine has to choose: life in Mexico or crime fighting in Houston. 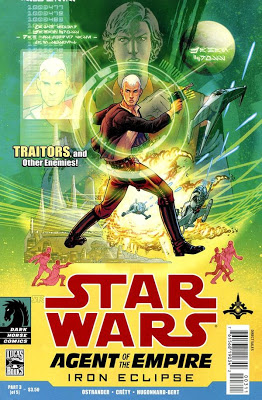 Jahan Cross is on the run from the authorities of the Corporate Sector for a crime he didn’t commit.

As he draws closer to the mystery surrounding the Iron Eclipse, he is without Imperial assistance and his droid, IN-GA 44. He has an ace in the hole in the form of Han Solo and Chewbacca. Sergeant Myrsk, a Nikto, has had Cross in his sights since the moment he arrived and is salivating at the idea of arresting an Imperial officer.

He knows Cross didn’t commit the murder but he doesn’t care and will do anything to get Cross behind bars.

The art maintained it’s vibrant display that contains a lot of fighting and things blowing up. 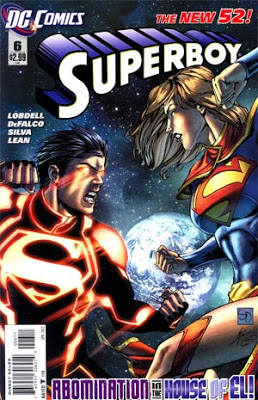 Superboy just finished wiping the floor with the Teen Titans and is kind of feeling guilty about it but he doesn’t know exactly why.

He is tired of being N.O.W.H.E.R.E.’s puppet and wants answers. Along the way he gets into a mile high slugfest with Supergirl that brings about some education and revelation of his Kryptonian heritage.

No complaints about the artwork and the story is compelling because this is their first interaction in the new universe.

DC has already announced a Superman Family crossover event in the summer and I believe a couple of breadcrumbs were left for us to chew on. 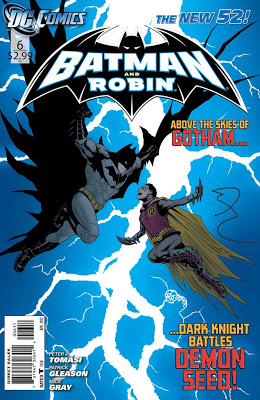 This book really should be called Damian Wayne or Robin since he is the central character of this series.

Morgan Ducard is determined to convince Damian that his father’s crime fighting methods are ineffective.

Damian appears to be drinking the Kool-Aid while Batman desperately scours Gotham in the Batmobile in order to find his son before he crosses the point of no return. T

omasi’s script and Gleason’s art provides a nice brisk pace to the story. We’ve seen father and son squabbles before but this is unlike anything we have seen to date.

The last page shows an extremely angry Batman when he hears something while on a pursuit. 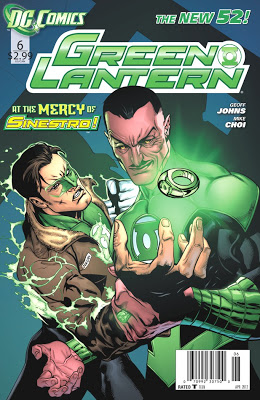 This is a filler issue and nothing more.

Hal Jordan is enjoying time with Carol Ferris and life without the ring.

Meanwhile, in outer space, Sinestro is beating up on some fools we haven’t seen since The Blackest Night. The confrontation on the cover happens on the last page.

Nothing good or bad just an uneventful 32 pages you can do without.

‘The History of EC Comics’ (review)

Written by Grant Geissman Published by Taschen   There are comics fans and then there are EC Comics fans. To say one is a...

Written by Matt Kindt Art by David Lapham Published by Bad Idea   This book was a surprise release this week. I don’t think...

‘You Look Like Death: Tales From The Umbrella Academy #1’ (review)

Written By Gerard Way and Shaun Simon  Art by I.N.J. Culbard Published by Dark Horse Comics   The Umbrella Academy franchise is experiencing a...

Written by Chip Zdarsky  Art by Ramon K. Perez, Mike Spicer Published by Image Comics/Skybound   I never would have thought to put writer...