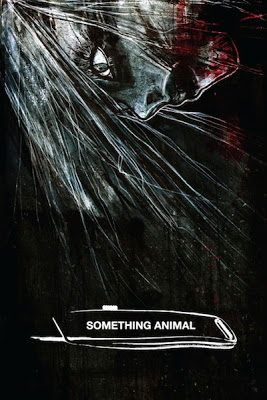 Art and tragedy go hand in hand when depicting pain and brutality. The crew from Fanboy Comics ups the ante as their first graphic novel titled Something Animal gives readers yearning for a story without the cape and cowl, something to sink their teeth into.

After witnessing his sister’s brutal murder, Jack struggles to cope with the disturbing, psychological aftermath. Tormented by images of the attack, Jack finds himself physically ill and unable to eat. Scared and alone, he is forced to confront a growing thirst for blood and the harsh reality that either his sanity is quickly crumbling or that he is turning into something else… something dark… something animal…

Dialog and word balloons in this book are few and far between because the art work is the driving force behind this psychological thriller. Robert Burrows’ art work reminded me of an unrefined combination of Szymon Kudranski’s work on Penguin: Pain and Prejudice and Sam Keith’s illustrations in the 30 Days of Night series. That’s not a knock however because there is nothing pretty about the darkness that is overwhelming Jack as he struggles for a sense of balance that is no longer there. The page layouts provide a smooth and enjoyable pace because of the sounds, the objects in the panels and Jack’s facial expressions do all of the talking.

My only grievance is the lack of information divulged about Jack. We get the bare essentials but the meal didn’t quiet fill my appetite. You got to give me more of a reason to care about the main character if you want the reader to have a vested interest in his story. To play devil’s advocate though, writers Sam Rhodes and Bryant Dillon provide an abundance of violence and mystery that bleeds as much as it leads readers on an odyssey of terror that is dark and disturbing.

Overall, Something Animal is something I thoroughly enjoyed. The plot was simple yet the darkness of it all consumed my imagination from beginning to end. Even though we don’t find out more about Jack, his strife is entertaining to the point where I felt “Damn, I totally don’t want to be that dude”…and at the same time, “I can’t wait to see what happens next.”

That’s all presuming there is going to be a sequel since the closing moments fade to a gloom and perhaps grim finality. When a story can suck me in so much that I felt I was becoming something different….mission accomplished!

If you would like to learn more about Fanboy Comics and what they have up their sleeve, visit them at www.fanboycomics.net.