Let’s just get right into it, OK?

During WWII, Ian Fleming was part of an elite branch of the UK military (the Special Operations Executive) along with many others, including Christopher Lee.

Yup, THAT Christopher Lee (Count Dooku, Dracula, Dr. Catheter from Gremlins 2, and some other movie about lords and rings).

Fleming went on to write the fictional character of James Bond, basing many characters and situations on real-life experiences. The stories then became popular motion pictures based loosely on the books (sometimes only the title of the movie was the only thing in common with the original story).

The question is: regardless of the fact that the Bond of Fleming’s stories was one man, how do you explain that for 50 years of motion pictures Bond stayed roughly in his 30’s?

How do you explain that?

The theory that people with nothing better to do have been kicking around for years is that James Bond is not one man, but several men, and “JAMES BOND, 007” is simply a job title within the British Secret Service. 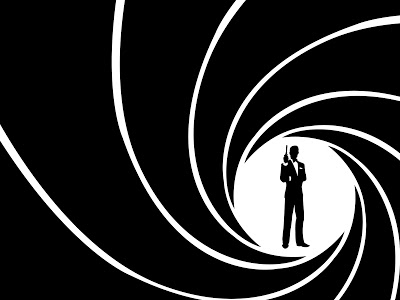 You do your job and then one day you die (or retire, resign, get your license to kill revoked….only to die another day) and some young jerk with fresh ideas takes your place.

Seems fair enough, the characters of M and Q have changed hands, but in On Her Majesty’s Secret Service James Bond (played only once by George Lazenby) marries Teresa “Tracy” Draco. Their wedding day ends with Tracy being gunned down by Blofield and Irma Bunt.

For the idea of different Bonds to work there is one main obstacle to get over….the fact that his marriage is referenced in other films. There’s a way around this to support the theory and I’ve figured it out (I’m so sorry).

I propose that a few more 007 movies have to be made, as period pictures, to take place throughout the last 50 years. These stories can be your typical Bond movies except with a subplot explaining where one Bond ends and another Bond begins (a human centipede of secret agents, if you will).

Below is a list of every James Bond movie released so far and inserted into the list is where the transitional film will be placed. 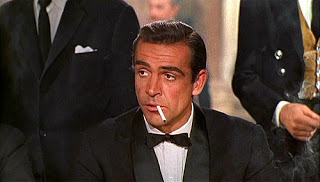 STOP! Here is where the 1st transitional film is placed in which Bond resigns and retires to St. Kitts to open a bar. 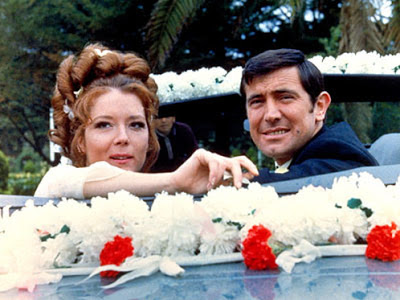 STOP! Following the events of OHMSS Bond quits over the loss of his wife.

Agents are sent to St. Kitts to plead with the Connery-era Bond to return to active duty for one or two missions until a suitable replacement is found. He agrees.

Diamonds Are Forever (1971) *We assume that after this Connery goes back to St. Kitts. Enter Roger Moore. 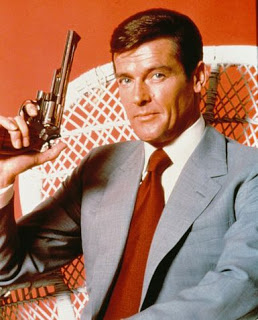 STOP! Upon returning from trying to upstage Star Wars, Bond is contacted by a mysterious man on his deathbed.

That man is former-007 George Lazenby.

He retells the story of losing his wife and pleads with Bond to do him two favors: Kill Blofeld for good, and leave flowers at the grave of his dead wife (on the anniversary of their wedding) as he is too weak and bed-ridden to do so himself.

Roger Moore, being the saint that he is, agrees to carry out his predecessors dying wish. 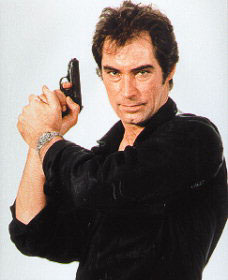 STOP! Bond retires, becomes an MI6 consultant, mentoring Timothy Dalton as he trains for the 007 gig.

He then goes back to California to become a stand-up comedian specializing in Christopher Walken impressions.

STOP! Bond is killed in the opening sequence.

During their first mission all but one are killed and he inherits the James Bond moniker (either that or the 7 recruits compete in a reality-TV show titled So You Think You Can Spy). 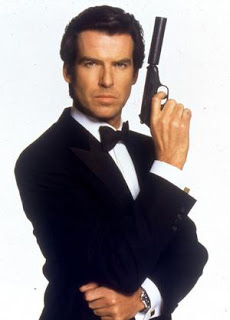 STOP! Bond and Jinx use the stash of diamonds they acquired during the escape at the climax of Die Another Day, go AWOL, and move to Cuba where they first met….to open a bar.

Casino Royale (2006) *The series is rebooted with Daniel Craig in the lead role, it does not take place in 1961, and there’s nothing anyone can do about it* 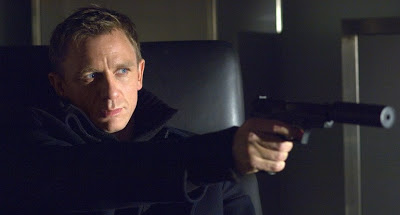 So there you have it! My solution to making the fan theory a reality. Hold on, my phone is ringing. It’s my roommate Jamie. I emailed him a rough draft of all the above. I hope he liked it…

“Kevin, this sucks! You left out a lot of stuff.”

“Doesn’t count. It wasn’t an Eon Film Production and even though Sean Connery stars as James Bond it’s just the result of legal disputes about the ownership of the Thunderball screenplay. Basically it’s a remake of a movie he was already in.”

He pauses for a second.

“Well, in The Spy Who Loved Me a character impresses James with the knowledge they’d gathered on him, including the fact that he’d been married once.”

“But he quickly changes the subject because at the time he was not aware of this aspect of his predecessors life. Besides, it’s a closely guarded secret that 007 hasn’t always been one person.”

“Fair enough. How about License To Kill? It’s brought up there as well.”

“Nope, because in my proposed ‘link’ film Roger Moore informs Timothy Dalton of this as he’s mentoring him in case it comes up so he doesn’t get caught off guard like he did back when he was a spy that loved someone. Moore avenges her death for Lazenby so it’s kind of important.”

“I thought it was a closely guarded secret?”

“Welp, Roger Moore has kind of a big mouth!”

“GOLDENEYE!” He thinks he has me now.

“I gather you’re referring to Alec Trevelyan asking Pierce if he ‘found forgiveness in the arms of all those willing women for the dead ones you failed to protect?’ THAT LINE?”

“That could mean anyone. In his line of work you can’t save everyone.”

“Mm, I guess, but if Alec mentioned Aki then we could just end this now.”

“Which one was she from?”

“Naw he left the estate so it can be presumed he had no knowledge she was mauled by dogs….unless he read the novelisation.”

“Wow dude! So? Any more ways to try to stump me? There’s one more!” Now I’m trying to stump him.

“Jamie, the world is not enough.”

“I hate you! What happens in The World Is Not Enough?”

“Okay, okay! I get it. Who hasn’t lost a loved one? And since they never mention Tracy by name he could’ve been thinking about his dog, Indiana.”

“I was thinking about calling George Lazenby ‘the Pete Best of the Bond Universe’.”

I hear Jamie sigh, then silence.

“No no no no! YouTube the music video for his song ‘Millennium’. The whole point of that video is to convince us he’s James Bond, or Sean Connery.”

“Wait a second……hold on……I GOT YOU! I proved that this won’t work! FELIX LEITER! He was with the CIA and helped Bond numerous times, and he was played by like 8 different actors, and I will not accept that the CIA had a similar program where they swap out agents and give some new guy the name like this ridiculous Bond theory that we’re still talking about.”

“Well then…uh…. he was a master of disguise, like Hannibal from The A-Team, and not until Casino Royale do we find out that he’s black actor Jeffrey Wright…..or Bernie Casey in Never Say Never Again, but we’re not counting that movie anyway.” I pause to catch my breath then ask Jamie one last question. “Do you want to know the name of the first Bond movie that takes place between Sean Connery and George Lazenby?”

“Doesn’t ring a bell. Where’s that come from?”

“Do you have to work Prince into every conversation?” (I do this a lot)

“Hear me out. Watch any of the earlier Bond titles sequences, the ones with all the silhouettes of guns and girls, turn off the volume and play the Prince song over it. Wait! But NOT For Your Eyes Only, Sheena Easton’s lips won’t match up with the words, but anything else up to and including A View To A Kill. Oh oh! Make sure it’s the version off the album The Vault: Old Friends 4 Sale, not the previously unreleased version with different lyrics about his former bodyguard, you know, the guy that played the doorman in Purple Rain. Play the Prince audio and the film sequence at the same time. It’s the new Dark Side of the Moon/Wizard of Oz. Hey, did I tell you Prince has a vocal range of 4 octaves, 3 notes, and 2 semitones?”