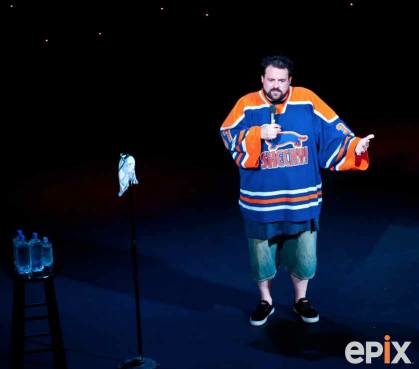 New York, NY – Writer/Director/Raconteur/Podcaster/Sinner (to some) and proud Jersey boy Kevin Smith returns to EPIX, bringing his unusual multi-talents in a one-man show, Kevin Smith Burn in Hell. The original comedy event premieres February 11 on the EPIX premium network. Additionally, EPIX is reaching out to Kevin Smith fans everywhere with an on demand preview beginning February 3, offering subscribers and non-subscribers an early screening of the entire special. The preview can be viewed via participating affiliated television providers’ EPIX On Demand service and EPIX apps on Xbox 360 and Roku. It will also be available for streaming at EpixHD.com and the “TV Everywhere” portals of affiliated providers.

In the hour and a half special, recorded live at the Paramount Theater in Austin, Texas, Smith conducts a riotous and outrageous Q&A session about the aftermath of his latest film, Red State. Topics include his mishaps and misadventures such as drawing the ire of the entire movie blogger community at the Sundance Film Festival and being followed around the country by the highly devout, and highly angered, Phelps Family.

Smith’s last special for EPIX, Too Fat for Forty which premiered October 2010, tapped his online base of millions of highly engaged fans for an EPIX Live Q & A event on EpixHD.com. “Kevin is tremendously popular with EPIX viewers – his first special continues to be a top performer on the channel, on demand and on EpixHD.com. We’re glad that he’s been a part of EPIX since the beginning and excited to have him back,” said EPIX President and CEO Mark Greenberg.

“The EPIX preview is designed to tap Kevin’s audience appeal to cast a spotlight on ‘TV Everywhere,’ increasing app and online authentications and subscriber acquisition for our affiliated providers,” Greenberg continued.

And we’re giving away a Kevin Smith prize pack after the jump!

Included is a signed copy of Silent Bob Speaks – The Collected Writings of Kevin Smith which interweaves the best of the Arena columns with a new introduction by the author and a Snoogans iPhone 4 case. 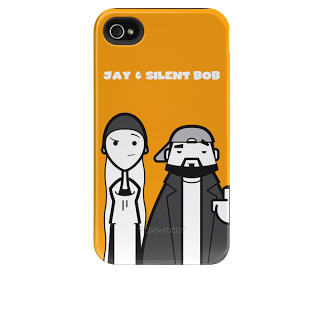 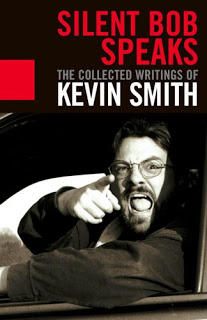 To enter, please send an email with the subject header “SNOOGANS” to geekcontest @ gmail dot com and answer the following question:

In this article:Contest/Giveaway, On Demand, Performing Arts, Press Release