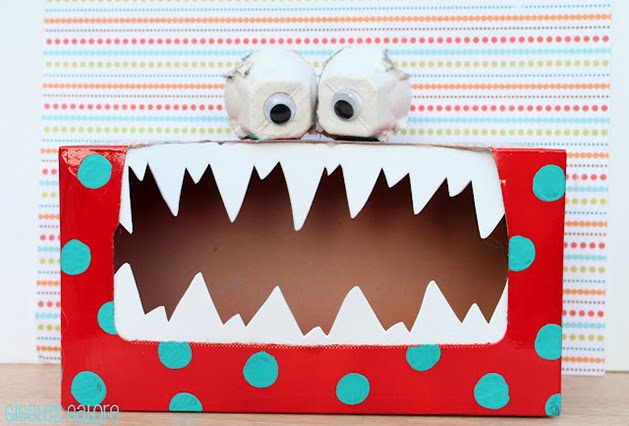 Okay, so ultimately the way this works is that you build this monster and instead of the kids bothering you with “He hit me”, “She took my Barbie” or “Dad is drinking again”, they write down their tattles and then “feed” them to the monster so they don’t bother you (then, at a later time, you read the tattles and assign appropriate punishments).

But let’s get real here, unless one of your kids tells you that your other kid is building a nuclear bomb in the garage, who gives a shit. Am I right? Nothing a six-year old says matters (unless of course it’s about bodily harm or why your change is consistently missing from your underwear drawer) so instead of having the little units write down their problems on paper, have them write down their issues on the dollar bills that they stole from you and then shove them into the mouth of the Tattle Beast.

That way they’ll learn that tattling doesn’t pay and you can make a little extra green.

Fun With Vinyl: Taking a Trip Down The Nostalgic Highway

Written by John Teehan I don’t want to get all hipster on you good people, but there really is something special about vinyl records....

By Alex C. Telander “It Was Colonel Mustard In The Library With The Candlestick!” 6 books for people who love the movie Clue. Kickass...

Kids are hilarious. They often have no idea that they’re hilarious, but they are. They’re also really, really scary. Like….“Thanks, son. I now have...