My Comic Drawer gave me something quite different.

It gave me Queen Crab, the story of a woman who has a somewhat dull life but after her new husband attempts to murder her she grows crab claws.

Queen Crab is an Original Graphic Novel published by Image Comics that had its funding raised via Kickstarter. 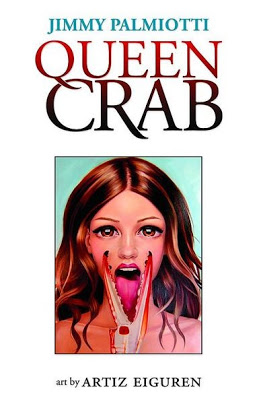 Yes, that makes it pretty independent, but the writer behind it is Jimmy Palmiotti.

Palmiotti has done plenty of art or writing work on a variety of titles including The Punisher, Deadpool, Supergirl and Jonah Hex , as well as a large amount of independent work such as Timebomb, The Pro, Back to Brooklyn and The Last Resort.

Palmiotti is also married to Amanda Conner—another comic artist, whom he frequently has collaborated with on other projects—so it isn’t like this is by some unknown.

The fact that Palmiotti  has done a lot of super-hero work in the past and wrote this book about a woman who is nearly murdered by her husband and then gains an odd power makes it sound like this is some sort of super-book.

Let me emphasize that this is nothing of the sort, and that’s perfectly okay with me.

Well, because instead we get an interesting character study with some sci-fi and horror elements.


Our protagonist Ginger is an interesting woman.

She has a close friend she sleeps with named Vinny, but she is getting married to a man named Murray. Murray has been having an affair too so Ginger doesn’t feel so bad about what she and Vinny have going on, and this is a bit of a complex love triangle but its working for everyone. However, on Ginger’s wedding night the woman Murray has been cheating with gets in a horrible accident and Ginger finds herself ditched in the hotel room so he can go be by the other woman’s side. If that isn’t a miserable way to spend your wedding I don’t know what is.

The woman dies and Ginger has to act like she never had any clue Murray was cheating and basically she gets to be depressed. Between that and her boss sexually harassing her by the time she and Murray finally go on their much delayed honeymoon cruise it feels like a godsend.

Murray throws Ginger off the cruise ship and the fact she can’t swim definitely is an issue. 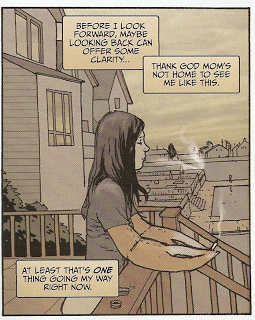 Strangely though, Ginger wakes up on Coney Island and she suddenly has lost her arms and gained two big crab claws.

From that point Ginger begins to put things together and realize how sleazy Murray really has been (besides the whole trying to kill her part), and starts to figure out what other strange abilities she may have gained.

A good chunk of the story takes place before Ginger gains her claws, but don’t think I’ve spoiled much because this is really more an interesting examination of her character and the growth she experiences.

In today’s comics with their often male-centric focus it is good to have one that tells the story of a strong, smart, woman.

Instead of fitting into particular clichés or stereotypes Ginger is a fully-fleshed out individual we get to know really well.

The art is provided by Artiz Eiguren and has an interesting style which is not at all realistic but instead slightly abstract.

You can tell who is who but everything has a feel almost like some of the European comics or 2000AD (which makes sense as Artiz is from Spain). The coloring is slightly dark and melancholy to match the mood of the story and it all works pretty well.

If I had complaints about the story it would maybe be that does take a while for Ginger to get her claws, and then the story quickly piles on a lot of strange abilities at the end of the tale without giving much time to explain them—slightly disappointing.

Also, this may be because this is the first printing of the graphic novel, but there are a few word mistakes that stopped me in my tracks. For example, there is a bit where character names get mixed up and it makes it sound like one character is on the phone calling to talk to himself—I had to stop and realize it was supposed to be “Murray” and not “Nick”.

For $12.99 however you get a nice hardcover book with a good amount of story, some sketch and other art pages and a nice closing afterword by Palmiotti saying he hopes to try doing more strange little things like this. 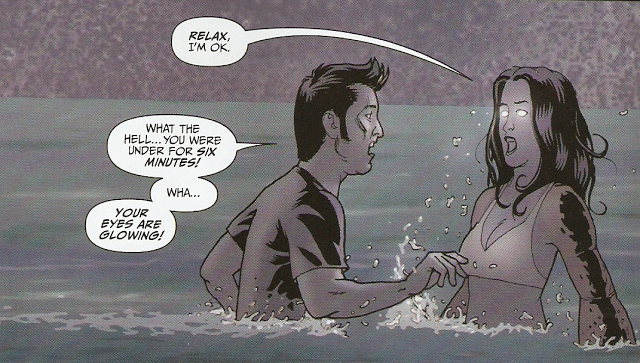 Oh, and do note that Image rated this Mature due to the swearing, some nudity, a bit of violence, and lots of cursing—so just as this isn’t a normal super-power tale handing it to a small child to read is less than recommended.

My comic drawer must realize that I enjoy more than just super-hero comics, because it gave me this bizarre little yarn, and I enjoyed it a good amount.