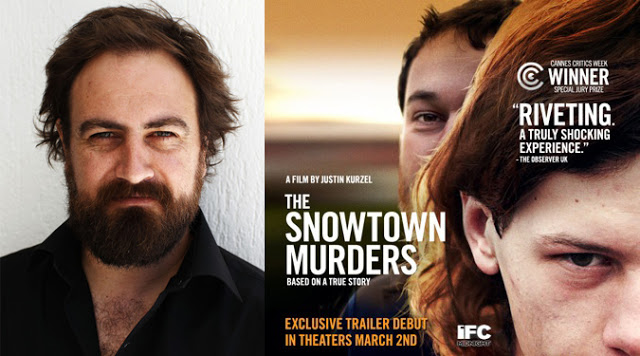 Based on horrifying crimes discovered in Snowtown, Australia in 1999, The Snowtown Murders is Justin Kurzel’s directorial debut, a stark journey into a brutal subculture of suspicion, addiction and violence. Winner of the Special Jury Prize at Cannes’ Critics Week, the film follows Elizabeth Harvey (Louise Harris), a mother raising her three boys in a poor suburb. After her latest boyfriend displays pedophilic tendencies, she takes up with a new man, hoping for security but instead welcoming an even more vicious predator into her home. John Bunting (Daniel Henshall) is the moral compass of a self-appointed neighborhood watch who, fueled by cigarettes and beer, cast judgments on those living around them. Bunting enlists his crew in acts of sadistic vigilantism on those he considers deviants, and in the process takes Elizabeth’s son Jamie (Lucas Pittaway) under his wing. The Snowtown Murders is an uncompromising film focused on the relationship between vulnerable teenager and a father figure who is revealed to be the worst kind of bully.

FOG! chatted with director Justin Kurzel about his startling and disturbing film.

The Snowtown Murders is based on a true story, what first attracted you to the project?
Well, I was grew up really close to the area and I guess, like everyone in Australia when the guys were arrested, I only really knew about the horror aspects of the case; the kind of attacks with the bodies in the barrel, that was reported as a bit of a freak show.   I didn’t really think much of it, and then I read the script and was completely surprised and shocked by the human story in it ; and I guess the story of Jamie Vlassakis and this young kid being seduced by this kind of father figure slash serial killer that I had no idea about it. The sort of point of view and a fresh perspective that I could tell that most of the country weren’t aware of, and I think for the first time saw a way of telling this story which I hadn’t seen before.

What responsibilities as a filmmaker did you feel that you had when it comes to dramatizing a true crime and how do you keep that from becoming exploitative?

Well this story I wanted to tell through the point of view of this kid and to me the themes of corruption of innocence and kind of nature versus nurture were kind of the driving thing. I didn’t want to make a horror film; I didn’t want the violence to be the leading character in the film. I guess I wanted to approach it in the most honest and truthful way, which is why we bought two books and we based it all off the transcripts of Jamie Vlassakis in the actual court hearings afterwards.  We did as many interviews as possible with people who were connected to the case. So every event in the film was as close as possible to the real events, and it’s a film that’s I guess more of an observation rather than a judgment or rather than a kind of exploitation of the more macabre aspects of the events.

Did you find that there was a concern when making it to try and understand and identify with the motivations of the actual people, or is it more about being true and accurate to the facts?

I think I guess the first thing that I was most focused on is a question of what would I have done if I was Jamie, and I guess growing up in this area and being surrounded by kids that were kind of desperately looking for kind of male mentors because they didn’t have fathers of their own, and the idea of kind of finding that sense of identity and masculinity through a kind of male mentor, I had an empathy with. I kind of completely understood. So the notion of this boy being attracted or seduced by this man was one that I could see, and I could understand, so that was the driving force behind the sort of story that we’re telling.  I guess the point of view that we’re kind of telling was how did the boy get kind of caught up in this situation, and then not excusing the choices that he made, but making people understand the sort of environment that we was in and the sort of pressure that he was under to be led into this sort of evil.

Were you able to meet with any of the real people involved, with their families, or was this strictly based on court records and books?

Out of sheer curiosity because I know the film came out in Australia, do you know if anyone has seen the film who is connected to the actual murders?

I don’t know if any of the perpetrators have seen the film, nor do I know what their reaction has been. We offered to have a screening for the families of the victims, and only one family decided to take up that offer while the others didn’t, which I completely understand and respect. I’m not aware at the moment of what sort of response or whether they even have seen the film, the characters that are depicted in the story of the film.

Were there any films that you referenced to prepare for this or any directors whose work who you exclusively looked at before you started production on this?

Not really.  It was kind of based on the actual events in the area that we filmed, I mean we shot this in the place where the murders happened, and had first time actors from the area, and I was very conscious in making sure that the area was the main inspiration in telling us what sort of film we wanted it to be and look like, as opposed to being inspired by any other directors or any other films.

What do you think made the community unique, that this could happen there? Do you think this is the kind of thing that could just happen anywhere under the right circumstances?

I think it could just happen anywhere.  I think it was probably a perfect storm in this particular area.  For a very long time it had been up against some pretty full on challenges; high levels of unemployment and poverty, and definitely very strong patterns of sexual abuse that kept on repeating themselves. I think there was a kind of apathy within the community about why this was happening and I feel that the community probably wasn’t feeling that it was being heard from authorities and government and it was just a perfect storm.  A well intended guy sat there and listened and formed an ideology about why it was all happening, and then I think inspired the community to do something about it. I think the horror of it or the tragedy of it is the fact that the ideology was exploited by John.  Suddenly the web that John created for the pedophiles; suddenly this community and especially this family and this boy suddenly found themselves trapped next to the devil.

What do you have coming up? What’s your next project? Have you decided on it yet?

I’m still deciding at the moment, there are a couple films in the UK and one in the US that I’m working on with script writers and just waiting on to see whether they’ll be ready to make this year, so they’re probably too early to kind of talk about.  I’ve written a script with my brother;  it’s a black comedy called Ivan Lendl Never Learned to Volley. So, I’m still making a film this year but it’s still too early to kind of start talking about really.

What are you currently geeking out on?

I’m gonna say – you stumped me, actually. I’ve been travelling with this film for so long that that’s all I’ve been thinking about.  I’ll tell you what I did see the other day that I really loved and I’ve become a bit obsessed with is Eastbound and Down We didn’t get it in Australia and I started watching it on DVD and it’s something I’m pretty impressed by.  I think there’s a certain kind of comedy there that is really great.

The Snowtown Murders was released theatrically on March 3rd and is currently available On Demand.