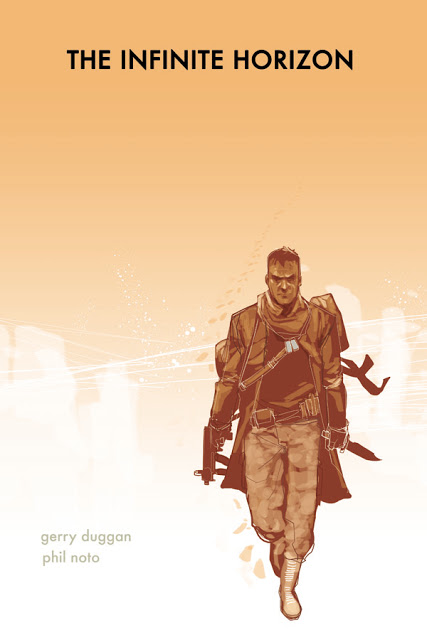 The completion of Gerry Duggan’s and Phil Noto’s Odyssey-inspired THE INFINITE HORIZON hasn’t taken quite as long as Odysseus’s journey home, but the nearly five years since the publication of the first issue of the Image Comics series to the April publication of the 186-page trade paperback collection (FEB120448) have been a saga of their own.

“When Phil and I began the comic in 2007 we tried to imagine scenarios that would make make a soldier’s ten-year journey home believable,” said writer Duggan. “I hope we made some interesting choices about the loss of technology and a crippling energy crisis, but I know we did a pretty good job of imagining a world that’s pulling itself apart. We could not have imagined the Arab Spring, but the fractured world of The Infinite Horizon seems much less fantastic just five years later.”

THE INFINITE HORIZON takes place in the not-too-distant future, with a small group of abandoned soldiers being led home by one man: The Captain. To get back, he’ll have to cross half the globe and endure deadly encounters with mythic enemies.

The Captain escapes shipwrecks, beats a vicious opponent wearing a cycloptic combat armor…and resists the siren’s call of a predatory society, all while encountering everywhere dying breaths of a great and horrible war. Artist Noto depicts the horrors of war and The Captain’s long trek home with an understated palette, the violence taking on a haunting quality as The Captain sacrifices more and more of himself to return home.

Duggan found his inspiration both in Homer’s 2700-year-old epic and current events in global conflict. “In the years following the 9/11 attacks I re-examined the poem and found it to be very fresh and relevant to our society,” he said. “We’re now living in a state of almost perpetual war. Contractors and drones will probably remain behind long after combat troops are withdrawn. The burden of these conflicts are not shared. Military families shoulder the load, and I have doubts about whether or not they are adequately supported for their service and sacrifice.”

THE INFINITE HORIZON is a full-color, 186-page trade paperback for $17.99. It collects issues #1 – 6 of the series, as well as bonus material from Phil Noto. The final order cut-off for comic book retailers for this title is March 19, and it will be in stores on April 11.. Its ISBN is 978-1-582409-72-6. An advance PDF review copy is available; please email Jennifer de Guzman at [email protected] to request one.