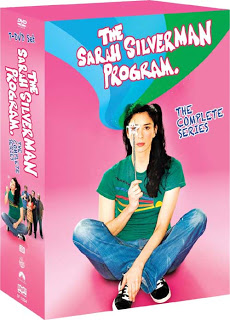 SHAZAM!
THE SARAH SILVERMAN PROGRAM:
THE COMPLETE SERIES
ALL 32 EPISODES OF THE  COMEDY CENTRAL
CULT SHOW RELEASED IN A 7-DVD BOX SET
BY SHOUT! FACTORY ON JUNE 19
“haphazard, amoral, ridiculous, wildly offensive…and, you know, totally hilarious. A- ”
– Entertainment Weekly
“Here it is all in one box y’all.”
– Sarah Silverman

June 19 will bring the release of a 7-DVD box set of the hilariously irreverent COMEDY CENTRAL show, The Sarah Silverman Program distributed by Shout! Factory.