A weekend’s worth of titles to add to your queue.

Not all are perfect, but for one reason or another, they’re all worthy of your time. 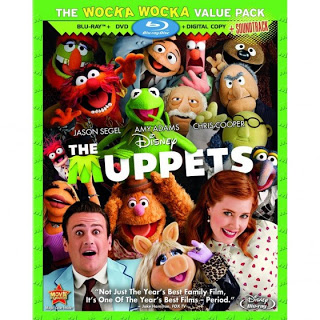 I love the Muppets.  I saw the original The Muppet Movie on opening day and approached this reboot with a bit of apprehension.  Suffice to say I was pleasantly surprised.

These aren’t my Muppets; but director James Bobin and co-writer/star Jason Segal have brought the Muppets back, and in doing so, maintained the magic and dignity of the characters.  That’s not to say that I didn’t have problems with the film; I didn’t care for the new Muppet, Walter (his special talent at the climax of the film also comes out of nowhere); some of the songs sounded a bit too Joss Whedon-y; and Amy Adams felt miscast (another actress who seems perfect, but wouldn’t be cast due to her connection to Segal would be Alyson Hannigan).  Plus, the ending is a bit abrupt.

The other thing that plagues me are the cameos.  In the original The Muppet Movie, the film was filled with some amazing personalities (Richard Pryor, Steve Martin, Bob Hope, Telly Savalas, Orson Welles) who all played distinct characters.  In The Muppets, it feels like the mere presence of a recognized celebrity will makes them a  character (and it doesn’t).

But, it works.  None of these things prevent the movie from being good, just from being great; and that being said, I’ve found myself revisiting this several times and it’s grown on me.  Extras are disappointingly light with a commentary track, featurettes, deleted scenes, blooper reel, spoof trailers.  It does contain a link to the iTunes soundtrack which is pretty awesome, overall.

Is it perfect?  No, but it’s close enough.  I’d be lying if I didn’t say that I laughed and cried during the film.  Despite my mild criticisms, The Muppets is highly recommended. 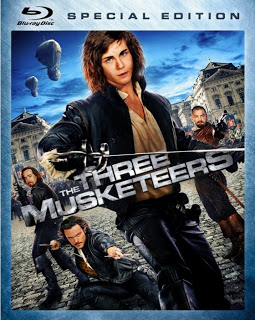 The latest adaptation of the classic Dumas tale made Quentin Tarantino’s 10 Best of 2011, and while I wouldn’t place it that high on my list, Paul W.S. Anderson does do an admirable job with this fairly entertaining version.  This time, the Musketeers are played by Matthew Macfadyen (Athos), Luke Evans (Aramis), Logan Lerman (D’Artagnan) and the scene stealing Ray Stevenson (Porthos) are attempting to stop the evil plot of evil Cardinal Richelieu (Cristoph Waltz) to take over France from Louis XIII (Freddie Fox) and Queen Anne (Juno Temple).  Also in the mix are the Cardinal’s cohorts, Milady de Winter (Milla Jovovich) and the Duke of Buckingham (Orlando Bloom).

The film’s 110 minute running time is packed, combining elements of steampunk with Matrix-like cinematography, over the top action set against a bright, candy colored palatte.  The dialogue is hokey and the screenplay doesn’t bring much new to the tale, but the film is unquestionably entertaining.  The blu-ray offers both stunning picture and sound, and the extras include a commentary track, an Access feature providing trivia and interviews, featurettes and deleted and extended scenes.

Director Anderson frequently gets a bad rap, but The Three Musketeers is one of the strongest examples of his work and is enormously fun.  Recommended. 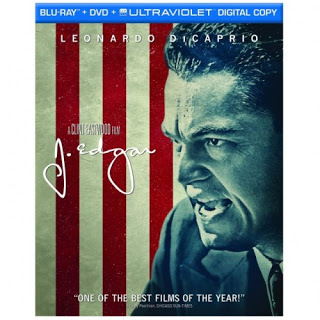 A misstep for both director Clint Eastwood and star Leonardo DiCaprio, J. Edgar is essentially about a man full of his own secrets who uncovers the secrets of others and uses those secrets to control the people around him.  Unfortunately, the film doesn’t live up to that premise and instead, is rather dull. Hoover is not a likable character and his own agendas and paranoia don’t add up to much in terms of story.

DiCaprio delivers a solid performance as does the rest of the cast including Armie Hammer, Naomi Watts, Josh Lucas and Judi Dench.  Unfortunately, the film doesn’t live up to the legend of Hoover, and instead it’s a bleak, unflattering subject who’s personal issues and motivations are purely speculative.  Screenwriter Dustin Lance Black who wrote the poignant Milk stumbles with a movie that is trying to make a statement, but instead says nothing.  To make matters worse, DiCaprio’s performance suffers after he’s buried in bad prosthetics portraying the older Hoover.  Extras include a lone featurette.

J. Edgar focuses on one of the 20th centuries most powerful, most controversial and most enigmatic figures and somehow makes it tedious.  Worth a rental for DiCaprio’s performance, but otherwise, skip it. 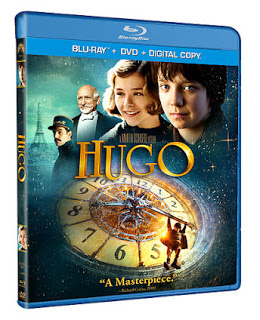 Hugo is a magical, film about life, love and the magic of cinema.

Based on Selznick’s popular book, Scorsese directs his first family film that embraces the history of film and the magical powers of cinema in subject, style and execution.  In some ways, his accomplishment might turn off many moviegoers.  It’s a film that expects viewers to care about the earliest days of cinema, an audience that might not even exist beyond the small percentage of cinegeeks.

The film takes it’s time, slowly peeling back it’s layers and revealing depths and surprises within.  The cast is uniformly great and Asa Butterfield portrays Hugo with wide-eyed wonder.  Ben Kingsley as Georges Méliès and Sascha Baron Cohen as a Keystone Cop-esque station inspector give the film’s best performances, with wonderful, albeit brief appearance by Christopher Lee.

I loved Hugo, but don’t think it’s to everyone’s taste.  The marketing using the mechanical man is a bit misleading and the film might be too long for the target audience of young viewers.  Nevertheless, if you want to see one of the greatest filmmakers of our time finally make his film about movies, Hugo deserves to be seen and embraced.   The Blu-ray is spectacular and even though this was the 2D version, Scorsese used 3D for depth, which is still evident in this release.

Extras include several featurettes, but would have benefited from some of Méliès’ actual films and a commentary from the master.  Hugo is highly recommended. 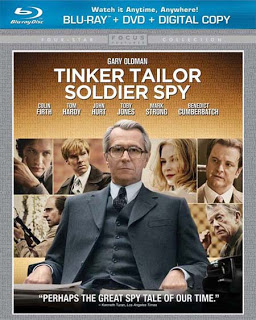 Based on John le Carré’s novel, this adaptation by director Tomas Alfredson is as dense and intricately constructed as a great thriller, but it also benefits from outstanding performances by some of the best actors working today including Gary Oldman, Mark Strong, John Hurt, Colin Firth, Tom Hardy, Benedict Cumberbatch and Ciarán Hinds.

Oldman plays George Smiley, retired intelligence agent who is brought back into British Intelligence (aka The Circus) to ferret out a highly ranked mole.  As Smiley starts his investigation, everyone is a likely suspect, and even though it’s not incredibly difficult to figure out the guilty party halfway through the labyrinthine execution, you can never truly be sure until the film plays out.

Extras include a commentary, interviews, a featurette, and deleted scenes.  Tinker, Tailor, Soldier, Spy is a dense, slow, and demanding film that not only delivers, but also gets better with each repeated viewing.  Recommended.