Imagine that you, an anime fan, have a friend who you’ve been expounding passionately to about your hobby for the past few weeks/months/years.

They finally cave and ask you borrow a title or two from your DVD collection.

But discounting that time they were catching Sailor Moon or Samurai Pizza Cats in the mornings before school, they’ve never really sat down to watch an anime before. They ask you for your recommendation – what do you give them?

This has happened to me several times now, and if you’ve been into anime yourself for a while, chances are it’s probably happened to you as well.

Imagine my horror when I heard that an acquaintance of mine had given Azumanga Daioh and Angel Beats to one of her friends for their first anime viewing. Said friend had settled down in the evening after work, popped in some DVDs, and promptly been scared away from anime for the next foreseeable while.

While both of these titles are perfectly fine – in fact, I’d happily pop them on my top 20 list – they’re definitely not what I would give someone as an introduction to the medium.

In part, this is because they’re a little genre-specific; I wouldn’t recommend either of these to someone who’d been watching anime for decades if they didn’t enjoy slice-of-life comedy or moe-style characters, for instance. More importantly though, it’s pretty difficult to get into anime as a whole when the first examples you’re given are full of unfamiliar visual cues, alien tropes of storytelling, and references to a foreign pop culture.

For this article, I’d like to talk a bit about the two titles you should be handing out to your friends.

And while they’re probably old hat for the fans, they’re perfect for anyone just starting out. Moreover, they have something in them for everyone regardless of their primary genres, they’re aging well, and they’re some of the most stylish anime I’ve seen to date.

I’m talking, of course, about Samurai Champloo and Cowboy Bebop, both directed by the legendary Watanabe Shinichirō.


The first is about young woman named Fuu who inadvertently ends up meeting a wandering vagabond called Mugen and a masterless samurai, Jin. She convinces both men to accompany her on a search for a “samurai who smells of sunflowers”, and the anime follows their journeys across Edo period Japan. You’d think that a period title incorporating hip-hop music and culture into the story at nearly every turn would be off-putting, to say the least, but nothing could be further from the truth. 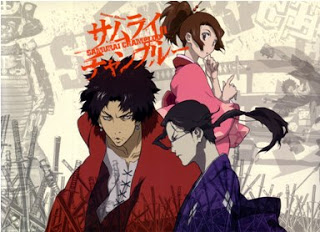 The second anime is a space western in which cowboys roam the galaxy – bounty hunters who live day-to-day by catching fugitives and handing them over to the police for often large sums of cash. The tale focuses on one such crew, made up of the easygoing Spike, a former cop named Jet, an aggressively sexual woman called Faye, a teenage hacker calling herself Edward, and their pet Welsh Corgi. Like Samurai Champloo, the music and counterculture, this time primarily jazz, is an integral part of the show’s artistry.

I won’t give anything else about these two titles away. If you haven’t seen them already, you should. Don’t look them up on Wikipedia first – the most important thing about both of these anime is the journey of the characters themselves, which takes precedent over plot. Here are five good reasons as to why they make for an excellent first anime:

1. They’re both 26 episodes long.
26 is a good number for an anime, and a standard of the medium. A shorter series (usually about 13 episodes) can be very fast-paced, and anything longer (shounen anime in particular are often in excess of 50) tend to drag. For someone new to anime, it’s important that a series is long enough to tell a decent and well fleshed-out story, but not so long that the viewer gets impatient or fidgety. My yardstick for this is that if I start to want to check my emails halfway through an episode, there’s something wrong with the pacing – which typically traces back to the number of episodes.

2. They’re both episodic.
The good thing about a well-done episodic series is that you can make the anime match your preferred pace, not the other way around. If you personally like to marathon a show, Cowboy Bebop and Samurai Champloo can accommodate. If you prefer to take things slow and watch an episode or two per week or even month, that’s also very do-able. While there is an overarching plot for both of these anime titles, that story builds up gradually over time, and most episodes can be thought of as small self-contained stories in their own right.

3. The overarching stories are easy to follow.
By no means is either Samurai Champloo or Cowboy Bebop unintelligent. On the contrary, I still find them thought-provoking after a dozen re-watches. But you won’t find any overly complex plot lines to follow, nor any witty rapid-pace dialogue. Best of all, there are no characters who are secretly bad guys but then suddenly switch sides before you discover that they’re actually another character’s long-lost sister’s wife’s cousin. There’s an excellent story to be told here, but it’s told succinctly and without undue fuss.

4. The artwork and animation is pretty top notch.
It’s not necessarily the most important thing about any given anime, but if I’m about to introduce someone I care about to the medium then I want them to be impressed – particularly if they’re expecting the more conventional large-eyed characters with gravity-defying hair. While the characters Cowboy Bebop and Samurai Champloo don’t look like real people, you won’t find any chibi designs or people with bug eyes running around here. The animation is relatively smooth as well, and easy on the eyes. Cowboy Bebop in particular has aged very nicely.

5. The voice acting is excellent in both languages.
While I do like to encourage people to view anime in its original language if they’re okay with subtitles (romance/drama shows especially can be notoriously bad when they’re dubbed), Samurai Champloo and Cowboy Bebop are not only serviceable in English but are downright awesome. The voice actors obviously have a good grasp of their respective characters, there’s no blindingly obvious lip flapping, and not having to read subtitles means having that much more attention to spare to give the visuals and overall narrative.

Personally speaking, I think Samurai Champloo has a slight edge over Cowboy Bebop in terms of anime for newcomers, in that it has a bit more of a contemporary feel and perhaps isn’t quite as dramatic as the latter. That said, Cowboy Bebop just keeps getting better every time I watch it, so that’s more likely to be considered the more ‘classic’ of the pair. In any case, both shows mix comedy, drama and action incredibly well, and provide some fabulous groundwork for anyone just getting into anime. My key advice to anyone watching either of these for the first time is simply this: don’t over-think things. Just keep your eyes and ears open, and enjoy the ride.

For those of you looking out for some other beginner-friendly anime, I recommend the following: Eden of the East, Fullmetal Alchemist: Brotherhood, Read or Die, Death Note, and Wolf’s Rain.

In this article:Animation/Anime, Written by Christy Gibbs