Produced by Kevin Feige
Screenplay by Joss Whedon
Story by Zak Penn, Joss Whedon
Based on The Avengers by Stan Lee and Jack Kirby
Directed by Joss Whedon
Starring Robert Downey, Jr., Chris Evans, Mark Ruffalo, Chris Hemsworth, Scarlett Johansson, Jeremy Renner, Tom Hiddleston, Samuel L. Jackson, Cobie Smulders, Clark Gregg, Stellan Skarsgård and Gwyneth Paltrow
This week I was lucky enough to not only see one of the most eagerly awaited movies of the year, but I also managed to spend a little time in the company of the cast at the UK Press Conference.
But the big question is, is Marvel’s The Avengers actually any good?

Marvel Studios have had this knack of finding the perfect directors. Want the classical machinations that would make Shakespeare proud? Kenneth Branagh is obviously the first choice on the list. Want a cool, WWII action movie with kid-friendly wartime battles with its tongue firmly in cheek? Go for Joe Johnston, director of the awesome The Rocketeer.


The Avengers is no exception. Knowing that the movie would feature a lot of characters who would each need to play to their strengths and work as a team, you hire the perfect writer/director for an ensemble piece – Joss Whedon. After all, Buffy the Vampire Slayer, and Firefly are all about large groups of heroes, and Whedon is the master of giving them all witty dialog and a chance for each to shine.

With a screenplay by Joss Whedon, based on a story by Whedon and Zack Penn, The Avengers gives each of these strong characters a chance to develop, show off their strengths and progress their stories just a little while never forgetting the plot.

But, just what is the plot of the movie?

Okay, here’s where it may get a little spoilery, but I’ll try to keep it fairly simple and not give away too much. 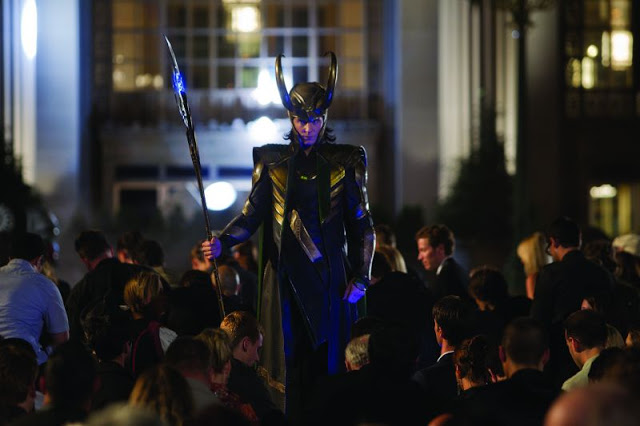 At the end of Thor, Loki (Thor’s evil and manipulative brother) was seen tumbling off into space, while the end of Captain America: The First Avenger we’d witnessed the Red Skull using the Cosmic Cube, also known as the Tesseract, to fuel powerful weaponry, though the Cube was lost only to be recovered by Howard Stark. As seen at the end of Captain America in the “monk’s reward”, SHIELD has the Tesseract and had recruited Professor Erik Selvig (Stellan Skarsgård) to unlock its secrets.
The Avengers opens with Loki, plotting with an alien race (seriously, turn away now if you don’t want to know…) known as the Chitauri (seen in the Ultimates comics as the Ultimate universe’s Skrulls) to open a portal to Earth to herald an invasion force, lead by Loki. 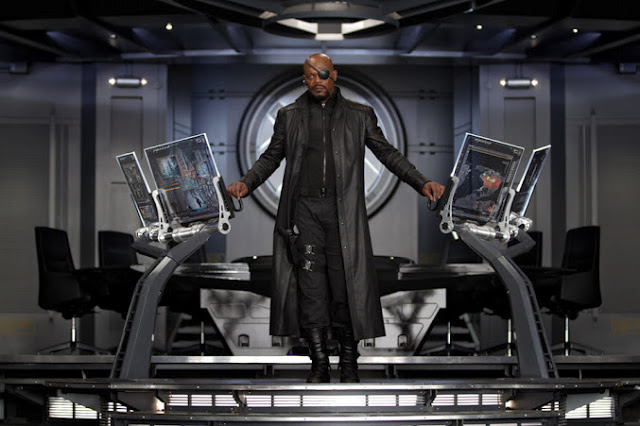 That’s about all you need to know for the plot.
It’s a simple alien invasion story, with an almost unbeatable force that requires “Earth’s Mightiest Heroes” to team up and fight them off. While other movie franchises would take this simple conceit as an excuse to pump as much money into mind-boggling special effects and action set-pieces as it can, Joss Whedon manages to use this plot to focus our attention on what’s really important here – the characters.

Obviously, Tony Stark/Iron Man (Robert Downey Jr) has most of the best lines and some of the coolest action, but he doesn’t dominate. After a slightly clunky opening sequence that initially had me worried, the moment Stark makes an appearance, and his quick dialog with Pepper Potts (Gwyneth Paltrow) and Agent Phil Coulson (Clark Gregg) you really see Whedon’s strong-point start to shine through. 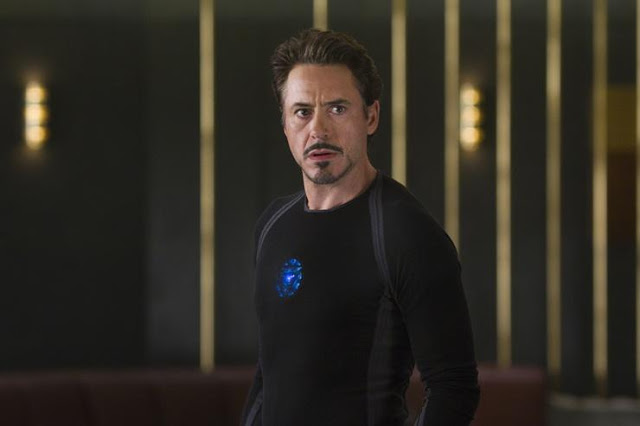 With just a handful of plot developments that you’ll ponder about afterwards (why did they have to go to Germany again?) all of the main characters have been “Assembled” aboard the SHIELD helicarrier and the dialog can really start to spark. Whether it’s the characters arguing and bickering, or working together, the characters are always the key and the dialog drives them through every scene.

Steve Rogers/Captain America (Chris Evans) may be a little short-changed with the witty one-liners, but he manages to hold his own in the action, and the seeds have been sown for some developments in the inevitable Cap sequel. 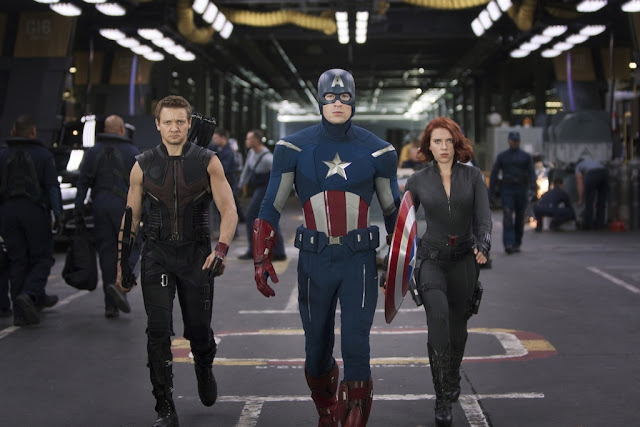 Black Widow (Scarlett Johansson) and Hawkeye (Jeremy Renner) have a chance to develop their characters a little since their supporting roles in earlier Marvel universe movies, and there’s hints at back-stories that are just itching to be revealed in their own respective spin-off movies. Johansson certainly has cause to celebrate with this film. Not only does Black Widow once again show that she can keep up with the fight scenes, but Joss Whedon manages to add some fragility to her character, and a little more emotional depth than she’d been given in Iron Man 2. Johansson does an excellent job of it too, look out for her conversation with Loki as a particular moment of genius in both writing and execution.

Thor (Chris Hemsworth) is as cool as ever, and his sequences with The Hulk (Mark Ruffalo being motion-captured while being the big green rage machine) are awesome. Though it does make you wonder if these characters are too powerful? That said, Ruffalo does an excellent job as the newcomer to the group. While it would have been fantastic if the ever brilliant Edward Norton could have reprised his role, Mark Ruffalo’s portrayal of Banner’s inner turmoil and sadness will win you over very quickly. 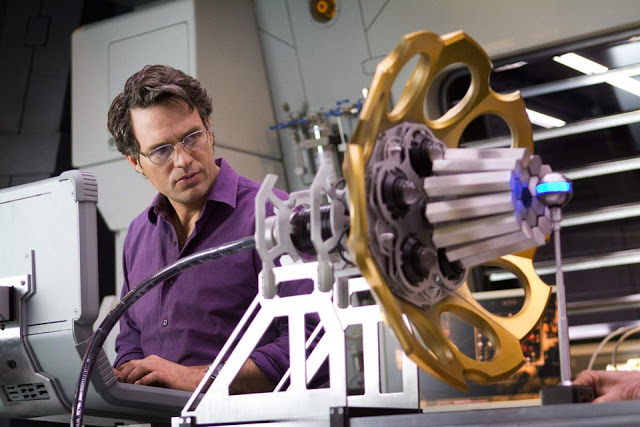 The SHIELD storyline adds an extra level to the movie, and gives Nick Fury (Samuel L. Jackson) chance to strut about and radiate cool.
Fan favorite Agent Coulson has a nice subplot regarding Captain America trading cards, and has some classy one-liners. If anyone should feel disappointed by the movie then it’s Cobie Smulders – her portrayal of Maria Hill is fine but she’s just not really given anything to do. Hopefully this will be rectified if the rumored SHIELD movie goes ahead – after all, Hill has a major role in SHIELD’s comic continuity, it’d be good to allow her film counterpart a chance. 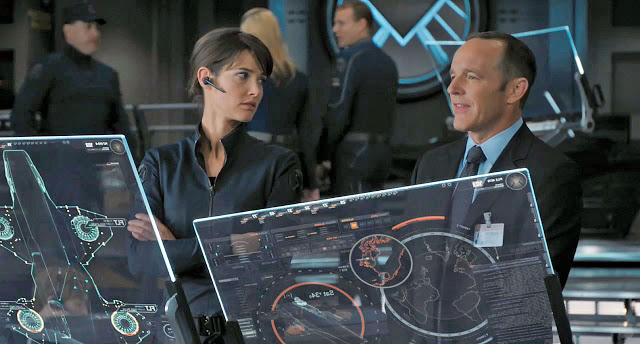 With some awesome set-pieces all building to the huge final act, Whedon again shows that every one of the Avengers is important. This is especially evident in a gorgeous flowing sequence moving from one character to the next in the midst of the chaotic and highly destructive battle. The action is never too much, it’s never too confusing, and despite a post-3D conversion the 3D is astounding. It could so easily have become a mess of Michael Bay-isms, but thankfully the action here is in the hands of a much more subtle director.

It’s not a perfect film. You really cannot come into this film without some knowledge of the characters from the previous films at least.
As I mentioned, the opening sequence before the titlecard feels a little clunky, some of the plot feels a little forced, and some of the characters are given too little to do (we’re looking at you Cap and Hawkeye), but considering the number of characters and the amount of action involved while keeping true to both the Marvel movie universe and the Avengers’ comic roots, this is as close to a perfect Avengers film as we could ever hope for. 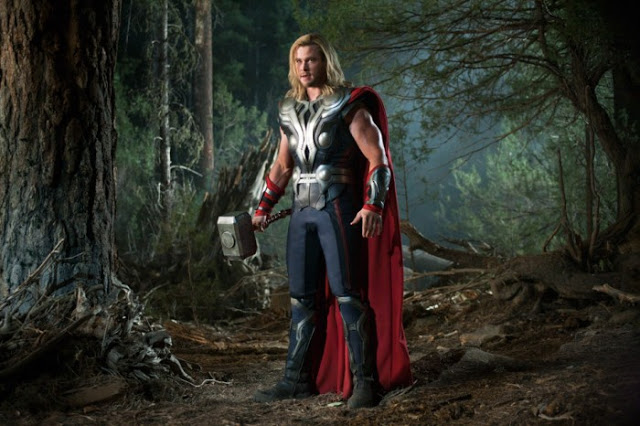 I’ll hopefully be seeing it again the moment it is released theatrically so I can take in even more of the wit, spectacle and humor and to see if there have been any changes made to the film, with the rumored extra filming that took place in the last couple of weeks.
I can’t wait to see where the Marvel movie universe heads next with Iron Man 3 and Thor 2, though if the end credits are anything to go by, we know what’s coming for Avengers 2! I just hope it’s Joss Whedon that brings it to life again.

Rating: 9/10
Dave Chapman is a writer, editor and designer of a number of tabletop RPGs, including “Doctor Who: Adventures in Time and Space” and “Conspiracy X”. Former comic publisher and self professed geek, if it’s remotely nerdy he’s interested. Favourite films are Inception and The Matrix, and he’s still obsessed with The X-Files.