Hm, what’s that?  Such a statement sounds strange about a man who has done so much evil against the shining beacon of good that is Superman? 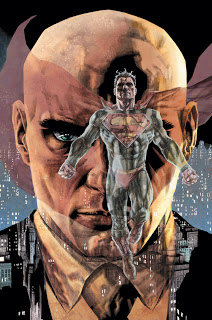 Pretend that when you saw the red and blue blur go by you didn’t see a man with powers flying around saving the day, you saw a dangerous alien who could crush us all with little effort, posing as a “good guy.”

Any time that so-called man with a big red, “S,” on his chest would appear you knew at any moment he could turn on us and wreak untold havoc.

You saw a monster that looked human but wasn’t anything near it, and instead of helping humanity it was essentially holding us back by making us dependent.

Imagine you saw all this, and it seemed like you were the only person in the world, wouldn’t that be terrible?

That’s what we read about in DC’s original graphic, Luthor, and that’s why I say, “That poor Lex Luthor.”

Originally this was a mini-series known as, Lex Luthor: Man of Steel, and it was collected into a trade paperback.

However, after the mini-series the creative team behind it–Brian Azzarello as writer and Lee Bermejo on art—went on to make the stellar original graphic novel, Joker, which took place in its own little universe from the Joker’s point of view, not unlike the Lex Luthor series. 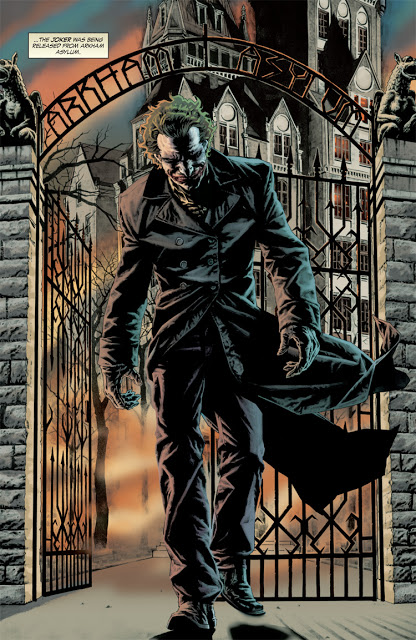 Hence, it only made sense for DC to re-release this series in a new hardcover as, Luthor, but sweeten the deal with some new story pages to flesh out the tale and make a few things more apparent that were only hinted at in the original comics and trade.

I actually own the Lex Luthor: Man of Steel trade paperback but didn’t hesitate to buy this when I first saw it. 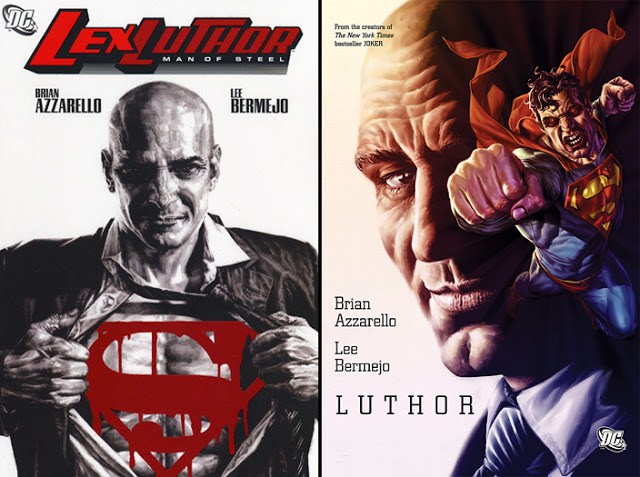 One could say that is because Azzarello is such a great writer (he is arguably most known for his masterpiece, 100 Bullets) or because Lee Bermejo creates such beautiful art. A person could also argue that the extra story pages make this a good buy. I would say it is all of those factors along with the fact that, Luthor, is just a dynamite story.

Luthor follows the title’s protagonist over a period of time as he deals with a variety of issues.

From his building of a new mega-tower dedicated to the greatness of Metropolis, to having dinner with Bruce Wayne after a flight to Gotham City, to working on developing his own super-human, Luthor has a lot he is working on. The thing is, it all relates to that, “Man of Steel,” in some way. It’s clear Luthor is building his tower to humanity as a sort of insult to Superman—and there are darker motives at play we witness later also.

The meal with Mr. Wayne also involves the famous flying hero, with discussion of what can be done in the case of a Superman-gone-bad. 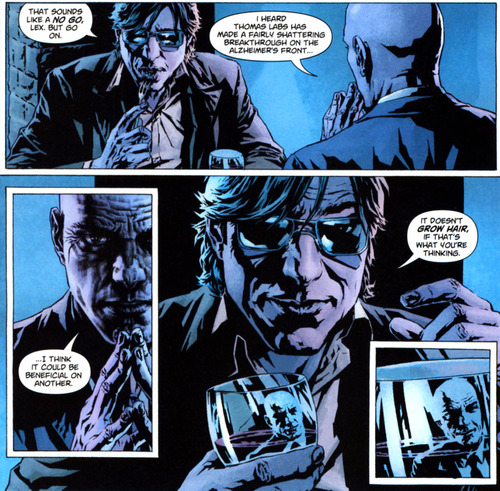 Plus, Luthor’s internal narration hints subtly he may know that Bruce Wayne dresses up as Batman at night, but that very drive is something Luthor admires in a man—because Wayne is at least still that—a man—compared to the monstrosity in Metropolis, and therefore can be understood and worked with.

As Luthor’s superhuman debuts to adoration, his tower nears completion, and other seemingly unrelated events take place, the tension anyone reading this feels will surely build until a big payoff, and boy is it dramatic and shocking!

My complaints about the book would only have to be that if the tale is supposed to make us think of Luthor as a misunderstood—dare I say it—good guy, then the way he deals with a striking union seems abnormally villainous.

Also, for those expecting a more action-packed comic be forewarned that while there are some moments of super-doing, fighting, and such, this is indeed a tale told from a Luthor’s point of view, and he doesn’t get out there in any sort of super-suit and wreak havoc so be prepared for a more talky and cerebral story. I myself love that about this hardcover.

I love that we delve into Luthor’s mind, but some readers maybe just want to see Superman smash something and even with a short Batman scene and some ending events this story isn’t so much fast-moving as it is a suspenseful slow-burn.

For those who’ve always thought of Lex Luthor as a terrible villain I would recommend this humanizing tale of him.

It’s beautifully illustrated, has an intense and suspenseful plot, and just might make you think again about the fellow.

It’s very telling when look at the confrontation excerpted about, as it illustrates just how creepy Superman can be from an alternate point of view, and points out that Lex Luthor isn’t necessarily the soulless monster he often is portrayed as.

At the end of day he’s just a man like you and me…and maybe, just maybe, he has a point about that Superman.