My comic drawer this time gave me something from Marvel Comic’s Ultimate Universe.

When I saw that it was from the Ultimate Universe, and something new, I become a bit nervous, and I’ll tell you why that is. 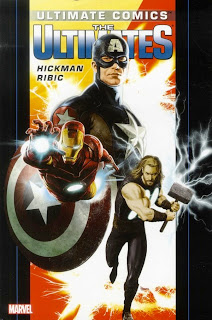 The Ultimate Universe of comics has been a bit rocky the last few years. Created to be a more, “continuity light” version of the Marvel Universe, it over time became bogged down in its own complicated stories.

This resulted in Marvel attempting an event called, “Ultimatum,” where they killed off a lot of their characters. It was utterly atrocious with the scene I most remember being that of The Blob eating The Wasp’s flesh and remarking she, “Tastes like chicken.”

Clearly that attempt at a re-launch failed so before too long Marvel did another re-launch of the Ultimate Universe, and this one has so far been much better, with the new Spider-Man named Miles Morales, The X-Men being on the run from the government, and a new Ultimate Comics Ultimates book.

Let’s get this out of the way, that name is indeed terrible (Ultimate Ultimates?) but everything inside that front cover is pretty enjoyable, a sort of interesting mixture of super-heroes and science-fiction.

I guess I didn’t need to be so nervous after all and should just trust in my comic drawer. 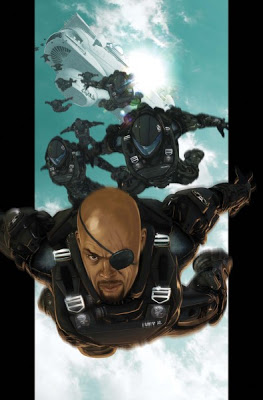 The basic plot is that the Ultimate version of Nick Fury (whom in past comics it was pointed out looks like Samuel L. Jackson, and now has Samuel L. Jackson playing him in the Marvel movies, go figure) is dealing with everything in the world going wrong at once as he always does, but this time one threat results in much of his team of the Ultimates being put out of commission, even Thor, who has his God-powers taken away.

How can Thor and his fellow Asgardians have their powers stolen?

A mysterious group known as the Children of Tomorrow that spend five minutes of real-world time building a complex called, “The City,” but thousands of years in their decelerated time pretty much come out into our world and start wreaking havoc.

Between taking powers from the Gods and killing most of them, and then having The City grow in size until it swallows a good chunk of Europe whole it is clear that Nick Fury and his Ultimates are dealing with a serious threat.

Writer Jonathan Hickman writes the characters within this book well, giving his Nick Fury an air of cool confidence, making Tony Stark the loveable trouble-maker with a serious-side who is undoubtedly familiar to fans of the Iron Man movies, and making us really feel for Thor when he loses so many of his fellow Gods to The Children of Tomorrow.

My favorite aspects of the book may have been the scenes of political negotiation where Nick Fury realizes there is no way he and his heroes can beat the people of, “The City,” yet the President is eager to attempt a military action, however ill-advised. Nick Fury trying to point out how bad this would turn out, and the familiar face he goes to in order to ask for help all makes for some intriguing reading that also are nice quiet moments to counter the big action scenes of heroes attempting to fight The Children of Tomorrow but failing terribly at it.

As Marvel is trying to bring in new readers it is nice that you don’t need much previous knowledge to enjoy the comic, however when a particular bad guy is revealed he/she will be familiar to people and it will seem strange why this Ultimate Universe version is evil.

I had to go online and inspect why this hero had become the monstrous person they now were as the comic didn’t provide any backstory as to why this particular man/woman was now evil.

Also, some of the later chapters mention going-ons in other Ultimate Universe comics, such as Ultimate Spider-Man and the Ultimate Hawkeye mini-series. You don’t need to read those to still enjoy this however.

Therefore, other than the issue of it not being explained why the one particular character has gone evil this book isn’t too difficult to follow, and I haven’t even yet talked about the intriguing art. 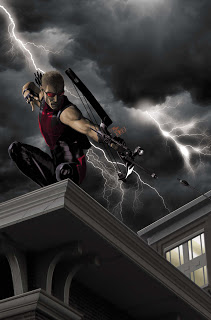 Esad Ribic is a skilled artist. He draws super-hero action well, but when he is creating eerie-looking sci-fi devices or creatures he really shines in this book.

Anytime we get a glimpse inside, “The City,” and view its creepy denizens or their surreal devices the book is truly at its best.

Ultimate Comics: The Ultimates is a creative mixture of science-fiction and super-heroes with a dash of political intrigue.

The art looks great and other than my couple of story issues everything is easy to follow.

Go pick up a copy down at your comic shop/bookstore and tell them I sent you—even though it is a 99.9% chance they will have no clue who I am so you’ll just get blank stares.