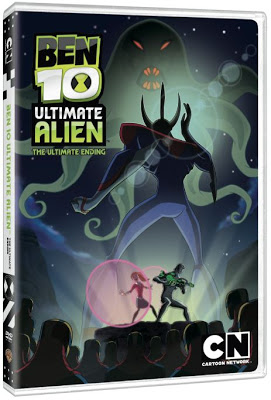 In the explosive finale, Ben 10: Ultimate Alien Volume 5: The Ultimate Ending, Ben must face his biggest enemy, Vilgax, who re-emerges in his most powerful form ever. It’s a race against time as Ben must stop him before its too late, and avoid the ultimate end!

The two-disc DVD set is filled with 10 action-packed episodes from the
television series’ third season, as well as an Ultimate Alien Database.

To enter, please send an email with the subject header “ULTIMATE ENDING” to
geekcontest @ gmail dot com and answer the following question:

What is the name of the actor who voices Ben Tennyson?