Indeed, his aptly named persona (taken from a 19th century voodoo doctor) has always seemed to conjure up that of a sort of medicine show salesman, a traveling dealer in advice and pharmacological remedies—and not necessarily those of the snake oil variety—but more of the real kind of remedien that you can actually use.

Like a mythical figure that has arisen from the swampy bayous of New Orleans, with all the influences that may entail, his actual life has so often crisscrossed with his fictitious personalities that a haziness seems to permeate his musical career.

However, finding your way through the mist is as rewarding a musical adventure as you’ll likely ever have.

Elected to The Rock and Roll Hall of Fame in 2011, Dr. John’s musical output is soul deep and extensive.

If one were to seek out all the sessions he has played on since the late ’50s and into the late ’60s  as “Mac” Rebennack, you might find little time for the albums he released later as Dr. John.

He has so many high points of quality, you can almost dip in anywhere along his chronological discography and come up with a gem.

Born in New Orleans’ Lower Third Ward, LA in 1940, Mac concentrated as a guitarist leading several groups and performing with a host of others including Sam Cooke. He arranged horn charts, had a local hit instrumental single, “Storm Warning” and switched to the bass guitar after a gunshot incident damaged his left ring finger. 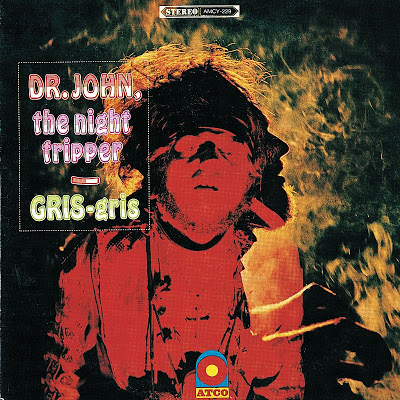 Heavily influenced by the legendary New Orleans pianist Professor Longhair, Mac settled on the piano as his main instrument and moved out to Los Angeles.

There, he performed as a session musician on a variety of albums by Sonny and Cher, Canned Heat and others, all the while assembling the group with which he would record his initial 1968 debut classic, Gris-Gris, under the name of Dr. John, The Night Tripper.


Gris-Gris with its creepy psychedelic concoction of semi-spoken word vocals, rhythm and blues, African percussion, female chanting, and slow brewed pacing, fit in perfectly and connected with audiences of the time to became an underground, non-charting success.

Along with the sound, there was the image Dr. John now used in concert, that of a trippy underworld, quasi Mardi Gras voodoo practitioner, an image no doubt borrowed heavily from Screamin’ Jay Hawkins’ outrageous onstage spookshow presentations.

Through many more albums over the years, including 1973’s In The Right Place, that gave him the #9 hit single “Right Place Wrong Time,” Gris-Gris still became the Dr. John album by which all his others would be compared and measured.


The Night Tripper name was eventually dropped and slowly more of his albums, though they often still had elements of his Gris-Gris style, changed, evolved and Dr. John would phase into more of an upfront singer-songwriter—a New Orleans Rhythm and Blues, Huey “Piano” Smith, boogie woogie, piano playing craftsman.

For Dan Auerbach, guitarist for the bestselling duo, The Black Keys, Dr. John left some unfinished business back in 1968, and when he traveled in to New Orleans in search of “Mac” he was determined to help the good Doctor get his “mojo” back.

Auerbach approached Dr. John in 2010 and told him he wanted to produce “the best record you’ve made in a long time.” Dr. John, having researched The Black Keys with his children and liking what he heard, and after collaborating with Auerbach on the 2011 Bonnaroo  Jam, approved of the pair recording together.

Locked Down was produced by Auerbach who also played guitar, cherry-picked the session musicians and recorded the album at his Easy Eye Sound in Nashville, TN.

The cover photo of Dr. John on Locked Down might clue a listener in immediately, as it clearly depicts The Night Tripper, resplendent in all his tripped out finery via the colorful braided feathery headdress he’s sporting.

Beginning with the title track of the same name, Locked Down creeps in with spooky sound effects, a sliding bass riff and an unreal groove that signals the presence of something special and extraordinary.

At times the album is distinctively Gris-Gris, with similar female backing vocals, shuffling percussion, and on “Eleggua” a swirling organ that shimmers in revealing a track that stirs up the murky voodoo jazz mix, including flute.

Yet Locked Down takes that things further out into a groovy, gritty, rock and soul fest not unlike the sound worlds inhabited by The Black Keys. It all makes perfect sense within the context of Dr. John’s vocals and at times, scathing lyrical observations.

On “Revolution,” Auerbach takes a snapping 4/4 soul beat and merges it with an Ethiopian Jazz sound that is not unlike the sounds of Daptone Records’ instrumental act, The Budos Band—a sound that reoccurs on the track “You Lie.”

Dr. John’s plaintive vocals on the melancholy “My Children, My Angels” are as richly rewarding as are the pleas that he’s offering the listener.

By ending with the album with the lifting sentiments of “God’s Sure Good” there is an optimistic finale that might never have been possible on Gris-Gris. A way out of the murk and forward into the light.

Intro and outro loops that almost sound like they come from a Carl Stalling/Merrie Melodies cartoon soundtrack, infectiously repetitive guitar riffs, big band horn stabs, and some elegant gospel backup singing, all are just some of the production elements that create such a richly fulfilling musical gumbo.

You can really get a feeling that the players on this album locked in, had fun and felt the spirit of the material.

This is not to say that a listener shouldn’t dip into any of Dr. John’s post Gris-Gris albums to still enjoy an unmatched high quality and inimitable voice.

There are many wonderful Dr. John albums. There are ones that feature songs such as his signature tune “Iko Iko” or his hit “Right Place Wrong Time,” so it became very unfair to constantly hope that one day he would revisit his Gris-Gris album, or come up with a comparably outstanding work.

That Gris-Gris sound however was one that Dr. John really never fully left behind, but he did distance himself from it enough so that now, with the unexpected kick in his musical ass from Dan Auerbach’s mighty boot, we are blessed and able to partake of startlingly incredible work of sound art.

Let the album stand on its own merits or call it Gris-Gris: The Continued Adventures of The Night Tripper.

Either way, Locked Down is not only one of the greatest albums of this year—a many starred classic—it is one of Dr. John’s best that will hold a place in the foreverlasting…