I first heard of Christopher Farnsworth the week his first novel, Blood Oath was released in May 2010 and was completely hooked.  It immediately became my “go to” recommendation for that year.

Last year, I did the same thing with his sophomore effort, The President’s Vampire and will continue to recommend the series, as his third book, Red White and Blood is being released this week.

I can’t recommend his work enough.  If you are a fan of genre entertainment, there’s a lot to enjoy here.  If you enjoy conspiracy theories, Fortian phenomena and vampires, you’ll dig it all the more.

Chris was kind enough to take some time out to discuss the series, the new book and what’s coming up.


Red, White and Blood is the third book in the Nathaniel Cade series. What’s the pitch for a reader unfamiliar with them?

The short version: Nathaniel Cade is a vampire who works for the President of the United States. He was bound by a blood oath to protect and serve the United States. He’s worked for every president for 145 years as the first and last line of defense against the Other Side — the supernatural forces that are waiting for a chance to take humanity down into the dark. He works with a human handler — a political operative named Zach Barrows — who relays the orders of the president and does the things Cade can’t, like walk around in direct sunlight. 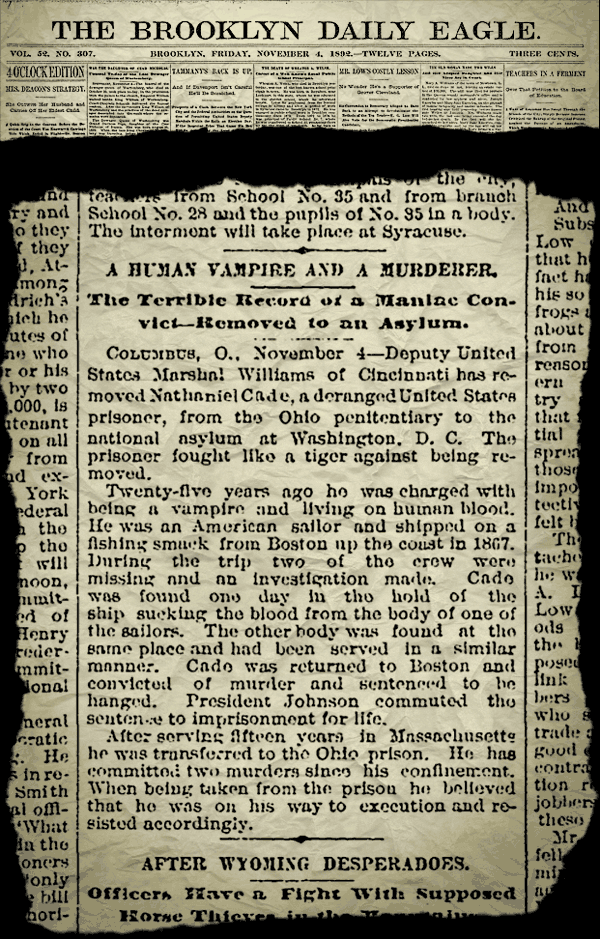 Cade is not a good guy. He’s a monster. But he’s our monster. And when things get ugly, he’s there to bite back.

In the third book, Cade and Zach have to go on the campaign trail to protect the President from an unkillable serial killer called the Boogeyman.

I actually became a fan when the first one, Blood Oath, was released a few years ago. What was the genesis of the character?

The books are actually based on a true incident in American history: in 1867, President Andrew Johnson — the one after Lincoln — pardoned a sailor who was tried and convicted for killing two of his crew mates and drinking their blood. The papers called the sailor “a human vampire.” There’s no record of why Johnson pardoned the man. At least, not in the official story. (A writer named Robert Damon Schneck actually did all the real research into this, and I highly recommend reading his book.)

But I kept wondering, what would a president do if he actually had a real vampire at his disposal? What if there were this whole shadow war going on that the public only saw in nightmare glimpses? From there, I mixed in horror movies, comic books, H.P. Lovecraft, Stephen King, and Mike Mignola. I wanted to create an alternate history where the War on Terror was really a cover for the War on Horror.

The Boogeyman is basically the patron saint of serial killers. It’s a spiritual parasite that takes over a human host and makes it stronger and tougher and then sets it out hunting for other humans. The idea started with Jason and Michael Myers and Freddy and every hook-handed urban legend you might hear around a campfire. But then, as I did more research, I found there really are some disturbing parallels with that idea in the details of real serial killings. Several serial killers — such as BTK, Ted Bundy, the Zodiac, Son of Sam, the Night Stalker — have all blamed a mysterious outside force for their crimes; some kind of demonic influence. And they all speak of it in similar terms. This goes all the way back to a killer known as “The Axeman of New Orleans,” who talked about being a “fell demon from the hottest hell,” and “collecting souls for the afterlife.”

I figured something like that would be a pretty good match for a vampire.

The series has been mentioned to have ten volumes. Assuming you’re working on the fourth, how detailed is your mythology and is there an overall arc planned?

I’m shooting for ten books to tell the whole story of Cade. There’s a lot of history to cover, and I think there are a lot of places to have fun with the idea of a vampire working behind the scenes of real-world events.

The fourth book, which is outlined now, goes back into some of Cade’s own personal history with Tania, the female vampire who’s his occasional companion. She represents his greatest failure — he swore he’d save her, and he didn’t — but she couldn’t be happier. She loves being a vampire. In the fourth book, we find out how that happened.

As for the overall arc, the idea is to eventually reveal the great big bad guy behind the curtain, and have Cade take on the ultimate conspiracy against the United States and the human race. It’s something vastly older and more powerful than he is, and I’m genuinely curious to see how he’s going to manage to survive.

The second book originally had the title Black Site and this one was Red States. Why did the titles change?

This is where the modern business of book marketing comes in. My publisher thought thought both of those titles sounded a little generic. If you’re going to have a vampire working for the president, after all, that’s something you should put right on the cover. Looking at it that way, I agreed. I think with the new titles, people know that vampire mayhem is baked right into the book.


Blood Oath introduced Cade’s new partner, Zach Barrows. As much as the series is about Cade, I feel like Barrows is the real focus.

Zach is the stand-in for the reader; he’s the one who gets to see all of Cade’s world for the first time. Aside from just being the new guy on the job, however, he’s also learning how to be a hero, or at least heroic. Cade is the protagonist, but he’s also fairly set in his ways — he’s over a 150 years old, after all. Zach can grow and change in response to his experiences. Zach started as a fairly shallow, opportunistic political animal. I like to think that with each book, he’s growing to understand the seriousness of his role.

What scares you and what makes Cade scary?

You can see as many horror movies as you want, but it takes parenthood for you to really understand the meaning of terror. Since I’ve become a father, everything scares me: bad drivers, poorly maintained traffic lights, oversized kids playing on the toddler’s jungle gym… There are days when the whole world seems like a trap filled with sharp objects and eye-threatening corners.

What makes Cade scary doesn’t have anything to do with his fangs, his strength or his speed. Those are all factors that make him a more efficient predator. But what makes him scary is his utter ruthlessness. The reason Cade has been able to survive for so long in his work — despite going up against much stronger and deadlier opponents — is the fact that there is nothing he won’t do to win. And this has the unfortunate side effect of being just as dangerous for his allies as his enemies.

I’ve been trying to cast these characters in my head and couldn’t figure out who would be a good Cade; your choice of Christian Bale was perfect, and you chose Justin Long as Barrows. What is the status of the film?

The movie was optioned by Lucas Foster, who also produced Mr. and Mrs. Smith and Law-Abiding Citizen.

Currently, it’s still in development. I’ve met with the screenwriter and he’s working on a treatment. So it’s moving ahead.

As for casting, I’d still love to get Christian Bale, but he may be done with dressing like a bat now.

The books are as much about politics as they are anything else. There’s a dramatic change at the end of Red, White and Blood. How much of Cade’s blood oath is tied into the individual rather than the office? In other words, can his oath be used against him?

There’s always a chance that America will elect someone to the office of the presidency who isn’t a good guy. And if that happens, Cade is bound to follow his orders. No matter who is behind the desk in the Oval Office, Cade has to protect and serve that individual. There are limits, of course. Cade has said no to presidents before when the orders conflict with the very basic duties of his job — like keeping innocent American citizens safe. But outside of those limits, Cade has to do as he’s told. And yeah, theoretically, if a very bad guy got into the top job, then Cade would be his servant. Those are just the rules of the game.

I know you’re a big fan of Jack Kirby and Grant Morrison. Any plans for Cade to come to comics and presuming you would write them, would you adapt the novels or possibly fill in the blanks of earlier chapters of Cade’s life?

I would love for Cade to be in comics. If I got the chance, I think it would be incredibly cool to do some of the secret chapters of American history that don’t necessarily fit into the novels in comic-book form. It would be a great way to expand Cade’s world and show some of his interactions with earlier presidents. And the cool thing about comics is that it would be possible to show moments that don’t fit in the confines of novels or TV or movies. I’d love to see Cade kicking ass across a full-color splash page, fighting horrors that would cost a billion dollars if you had to do them in CGI.

What’s next besides Cade 4?
I just finished writing a book that doesn’t have any supernatural elements, a crime novel that I’m putting the finishing touches on. And I’m working on a couple of new projects, including a new character who’s Cade’s opposite in every way — a man who’s so smart he’s only challenged when he’s solving world-ending problems, the kind that usually result in a mushroom cloud and an ominous silence. He operates completely in the daylight, completely in public, and is grounded totally in science.

I just finished reading an amazing book called Liminal States by Zack Parsons. It’s a story that spans over a century and incorporates sci-fi, horror, Westerns, detective noir and a bunch of other genres, and manages to make them all work together. The prose is brilliant, truly. Just to give the barest idea of what’s inside: two men in the old West, sworn enemies, discover a way to cheat death — and find themselves locked together even as they distort the world with their presence. It’s a hell of a ride.

Visit Chris’ Homepage and Follow Him On Twitter
Red, White and Blood arrives on April 26th
Blood Oath and The President’s Vampire are available now