In the annals of classic screen comedy, there are perhaps no more hotly debated yet enduring comedians than the Three Stooges.

A vaudeville, and later movie, team that underwent several personnel changes over the decades, the Three Stooges were originally teamed up under the guidance of Ted Healy, and performed on vaudeville stages across the country before appearing in a series of short comedies that secured their place in the history of film comedy.

It was their career in movies that gained the Stooges’ immortality and landed them their place in the comedy pantheon. Specializing in extremely rough and crude knockabout comedy, performed with expert timing, the Stooges gained many fans who loved their fast, slapstick style, which also alienated some audiences who preferred their comedy with a little more subtlety.

The Stooges lacked the humanity of W.C. Fields, the verbal wit of the Marx Brothers, or the endearing qualities of Laurel and Hardy. But they carried on the tradition of slapstick comedy in the two-reel comedy short going back to the Keystone days.

With the release of the new Three Stooges movie, it’s a good time to revisit the original Three Stooges whose unique brand of slapstick and comedy timing have proved durable for the better part of a century.

Vaudeville in the early 20th century was a rich training ground for comedians of all kinds. Physical comics, stand up comedians, and musical performers co-existed on vaudeville circuits all over the country, perfecting their sense of timing and honing their acts before live audiences on a nightly basis, learning what bits worked and which bits didn’t.

Out of this environment came Ted Healy and His Stooges, first appearing in 1925. The act centered around Healy’s roughhouse treatment of his stooges, with plenty of slapping, eye-poking and other now-classic material that they would make famous in their films over the years. The original trio consisted of Moe Howard, his brother Shemp, and Larry Fine. 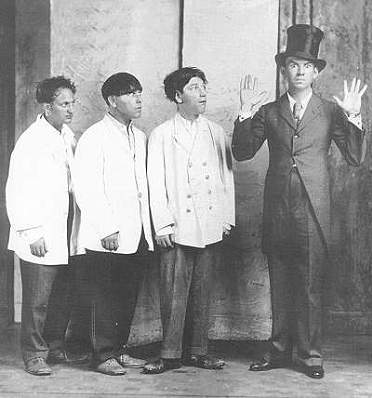 Together, they entered movies in 1930, with the Fox production SOUP TO NUTS. This unique comedy, which has since resurfaced on DVD, is an interesting look at the “early” Stooges, before their characters were fully formed. It’s especially interesting to see Shemp as the “third stooge” at this early stage of their film career, and to see them interacting with Ted Healy.

Shemp was soon replaced in the act by another Howard brother, “Curly”, who joined the team when they moved to MGM and began appearing in a series of specialty short subjects, as well as putting in an appearance in the studio’s mammoth musical-comedy extravaganza, HOLLYWOOD PARTY (1934), which also featured an appearance by another legendary comedy team, Laurel and Hardy. At this point, Ted Healy was still performing with them, but he would soon leave the group to pursue a solo career. 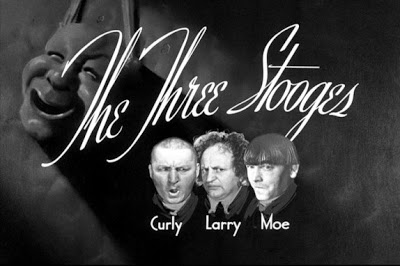 It was at this point that the Stooges really developed into the act that we remember them for today. Starring in a series of two-reelers for Columbia Pictures (then a Poverty Row studio notable mostly for the films of director Frank Capra), the Stooges hit early success with such short subjects as MEN IN BLACK (1934), a parody of hospital dramas, and THREE LITTLE BEERS (1935), which featured a hilarious golf sequence. 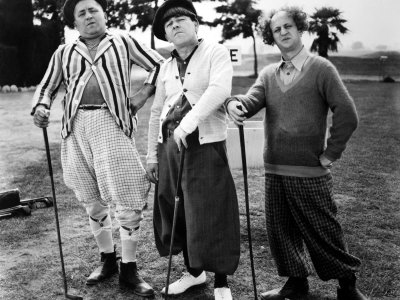 One of the best-known Stooges shorts from this earlier period is DISORDER IN THE COURT (1936), which – because of its public domain status – often turns up on cheap compilations of their work. Set entirely in a courtroom during a trial, with the Stooges as witnesses to a murder, the film features the classic “swearing in” routine with Curly.

Interestingly, this routine had been used five years earlier in a Buster Keaton film, SIDEWALKS OF NEW YORK, made for MGM in 1931 and directed by frequent Stooges producer Jules White.  But Curly’s impeccable sense of timing, and hilarious delivery, made their version a classic bit of comedy. 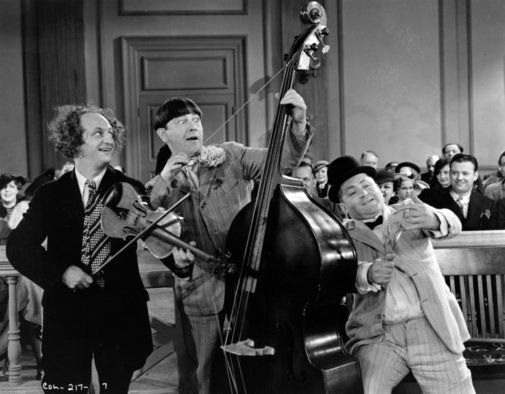 The Stooges would appear in a total of 190 shorts for Columbia, with Shemp returning to the act after Curly suffered a stroke.

In the interim, Shemp had built a successful solo career, appearing in films with such top-flight comics as W.C. Fields (THE BANK DICK) and Abbott & Costello (BUCK PRIVATES). He remained with the team until his death in 1955, at which point he was replaced by Joe Besser, and finally Joe DeRita, as the “third” stooge. 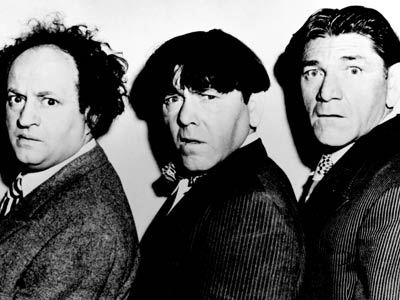 Their later career saw many TV appearances, as well as several feature films, and one of their final appearances was in Stanley Kramer’s comedy epic, IT’S A MAD MAD MAD MAD WORLD (1963), in which they were sadly wasted in a cameo as firemen, given no dialog or physical business to perform. Fortunately, due to the airing of their films on television, the Stooges were rediscovered by a new generation who embraced their work and secured their place in the comedy pantheon.
The Stooges represent an important tradition of carrying on the pure slapstick and knockabout comedy that dates back at least to the Keystone comedies of the silent era. They kept slapstick comedy alive for many decades, even through periods when slapstick was getting hard to find on movie screens.

Similarly, the new “Three Stooges” movie, though featuring imitators of the original comedians, comes at a time when there is little pure slapstick comedy being performed in films anymore.

Hopefully the film will inspire new viewers to seek out the original short subjects, which contain those timeless and brilliant bits of physical comedy that have allowed the Three Stooges’ unique brand of comedy to endure for almost 90 years.