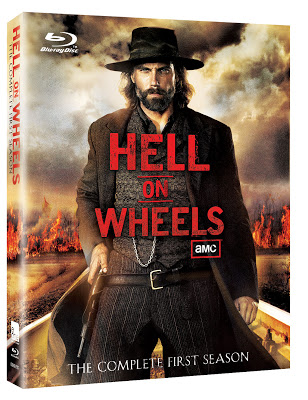 Hell on Wheels tells the epic story of post-Civil War America, focusing on a soldier who sets out to exact revenge on the Union soldiers who have killed his wife. His journey takes him west to Hell on Wheels, a dangerous, raucous, lawless melting pot of a town that travels with and services the construction of the railroad, an engineering feat unprecedented for its time. The lavishly-produced series documents the railroad’s engineering and construction, as well as institutionalized greed and corruption, the immigrant experience and the plight of newly emancipated African-Americans during Reconstruction. Chronicling this potent turning point in our nation’s history, this fan favorite series shows just how uncivilized the business of civilization can be across 10 absorbing episodes.

Hell on Wheels: The Complete First Season is available NOW on DVD & Blu-ray, and thanks to our friends at Entertainment One, we’re giving away three copies on Blu-ray to Forces of Geek readers.

To enter, please send an email with the subject header “HELL ON WHEELS” to geekcontest @ gmail dot com and answer the following question: