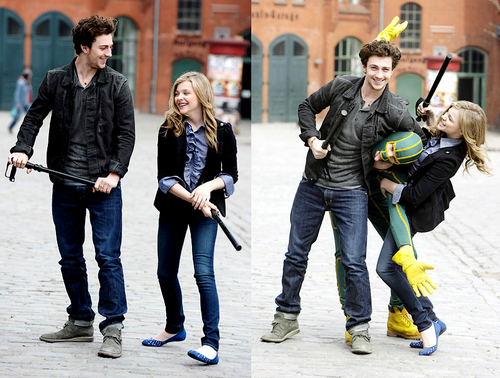 “Well, I can tell you that I’m here in London because we’re making the movie. They brought me over about a week ago and I’m going to be here for about a year. It’s happening. Our first day of photography is in September. It’s all moving forward. I wrote the script over the holidays. I’m just very happy to be here and I’m very lucky to be working with Matthew Vaughn, whose just an incredible producer. Obviously he’s a fantastic writer and director, but he’s produced even more movies than he’s directed and he’s having a tremendous experience so far. It’s moving forward and it’s happening.”


“It’s been an interesting process because for those of you who know the property really well, the movie takes some significant liberties with the first comic book. So then Mark did the sequel to the comic book which is Kick-Ass 2. So I had sort of this movie and the comic book and I had to find the intersection. An adaptation was quite a challenge, but one that I really enjoyed and loved. I think the most important thing that’s gonna change from the Kick-Ass 2 comic to Kick-Ass 2 the movie was just really finding an emotional story to tell. Because what I certainly loved about the first film, and what I think elevated it above most comic book adaptations, is the heart and the emotion in the film. It was sort of my challenge as the film maker and storyteller to find something as emotional in the second film and I think we have some stuff that people are gonna really respond to.”


“Well, nothing is official yet. But I had breakfast with Chloe two weeks ago and she’s read the script and she’s very excited about what we’re doing with Hit-Girl. If you’ve read the comic, you know, she gives up being Hit-Girl, which was a brilliant idea I thought on Mark’s part. It’s something I explore something quiet deeply in the movie because what happens in the comic is she sort of steps away from the story in many ways and she’s sort of sidelined while Dave is working with Justice Forever and Chris is becoming the Mother[frick]er. But I was quite interested in what happens to her when she’s not being Hit-Girl. Her story is a major, major part of the film and she’s excited about the ideas and we’re in talks.”