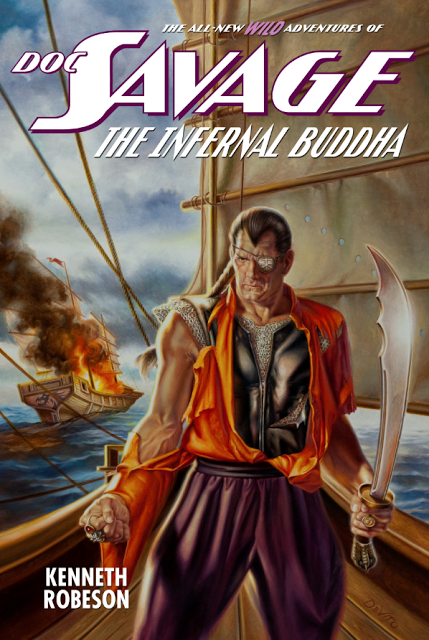 Altus Press is proud to announce the release of the third volume in its acclaimed Wild Adventures of Doc Savage series, written by Will Murray and Lester Dent, writing as Kenneth Robeson.

Set in the Fall of 1936, THE INFERNAL BUDDHA tells the epic story of Doc Savage’s desperate quest to control the Buddha of Ice, a relic of unknown origin—and what may become the most dangerous object on Earth!

When a mummy arrives at Doc Savage’s New York headquarters wearing the clothes of his missing assistant, engineer Renny Renwick, Doc, Monk, and Ham rush to Singapore where they get on the trail of a swashbuckling pirate who calls himself the Scourge of the South China Sea, in whose hands a piece of the infernal Buddha has fallen. The trail leads to Pirate Island, the fate of Renny, and a mysterious box containing a terrible, unstoppable power.

But that is only the beginning of the quest into which the Man of Bronze plunges—one that will take him to the upper reaches of the Yellow Sea and a series of wild ocean battles against the vicious factions fighting for control on the infernal Buddha.

Before it is all over, every human life on Earth will tremble on the brink of eternity, and Doc Savage will face his greatest test.

“This may be my wildest Doc novel to date,” says author Will Murray. “THE INFERNAL BUDDHA is a fantasy epic full of corsairs, criminals and other culprits. The menace is planetary. The threat, extinction. Doc Savage has a reputation for saving the world. This time he does it on the greatest scale possible. I began this book back in 1992, working from an opening situation Lester Dent started in 1935. Together, we have produced a true Doc Savage epic. And it only took about 75 years….”

THE INFERNAL BUDDHA will be released as a trade paperback and e-book in May, with the hardcover edition following in June. All editions will feature a startling cover painted by Joe DeVito, depicting Doc Savage as the Buccaneer of Bronze! This cover was painted from a still taken in 1964 of legendary model Steve Holland, and is a variant pose shot for famed illustrator James Bama’s classic cover to THE MAN ON BRONZE. There has never been a Doc cover like it!

The hardcover edition will include two bonus features—an Afterword by Will Murray detailing the creation of this story, and a memoir by James Bama of his days painting the Bantam Books Doc covers.

For ordering information, go to www.Adventuresinbronze.com