When I was a wee tacker growing up in Melbourne, my dad picked up this second hand tome called Myths and Legends, published by Paul Hamlyn way back in 1959.

The illustrators were the insanely cool Alice and Martin Provensen, and it turns out that Martin was also the originator of the first Tony the Tiger character for Kellogg’s – an iconographic ’50s feline that decorates my fave coffee mug these days.

About five years ago, I started writing for an American magazine called Geek Monthly and, a few issues in, they showcased a relatively new artist/illustrator named Scott Campbell, alias Scott C.

To me, his images were akin to the Provensens, channelled via Blackadder writers Richard Curtis and Ben Elton, and then stretched to the point of surreal hilarity by Dr. Seuss.

I was busy hacking together a novel at the time (Tobacco-Stained Mountain Goat) and my publishers at Another Sky Press asked if I’d decided yet who I’d like to get to do the cover artwork.

That was now a cinch – all I had to do was track down and ask Campbell if he’d be interested. After some crap detective work, I did so, and he agreed in an instant, very few questions asked, and turned out a way cool couple of goats.

I always wanted to interview Scott in order to find out the buried treasure beneath his easy-going artist facade – and I finally did so this last month, on the back of his fantastic new children’s tome East Dragon, West Dragon, which my six-year-old daughter Cocoa loves as much as me, by the way.

So, first up, how did Scott get started doing art, remain inspired, and stumble across his own unique style? 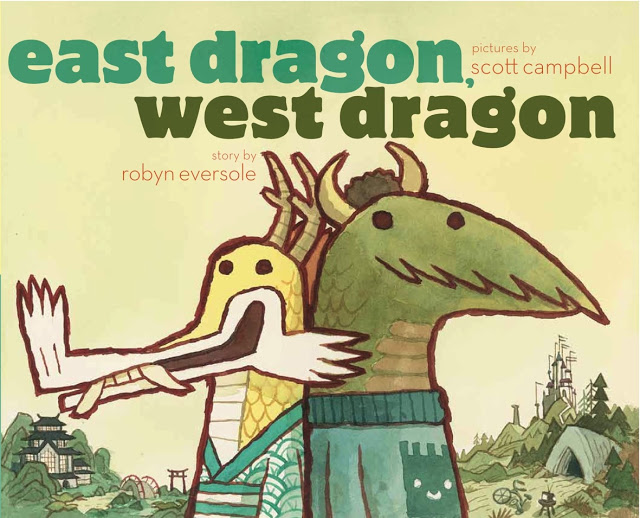 “I think it’s a combination of all the comic books and children’s books I grew up with,” he appraises, “Coupled with all the movies and cartoons I’ve enjoyed through the years–and the people I experience around me everyday. Right now, I’m most inspired by Charlie Harper, an illustrator big since the ’50s. I love his colors and the awesome shapes he finds in things. Same goes for Jon Klassen and the Provensens. Jon is a contemporary illustrator who designed an amazing water conservation commercial, among other thing, and he’s also very good with shapes and colors and textures. The Provensens illustrated kids’ books in the ’50s and have this sensibility. But I also like artists like Banksy a whole lot. I saw his pet store he did here in New York, and it inspired me more than anything I’ve seen in a long time. I’ve never seen anything like it – super clever, and made me very interested in how people participate in shows when they come to see them.” 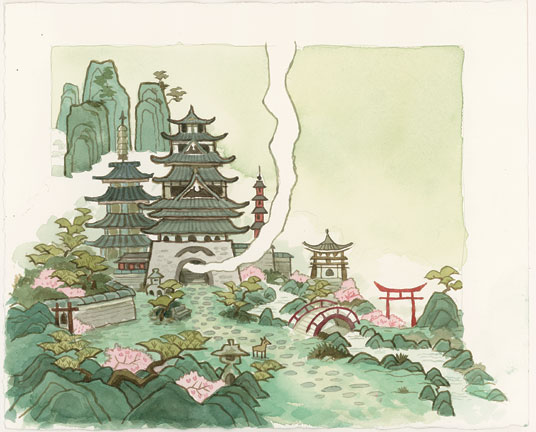 Tell us a bit about the character of East Dragon in your new book East Dragon, West Dragon – do you see him as pan-Asian, or a tad more Japanese?

“Definitely erring more on the Japanese tip because I am just so obsessed with Japan. This was a big discussion my editor and I had, Japanese versus Chinese. We didn’t want to combine the styles and hopefully that is all right. I have researched Japanese architecture and culture for many paintings I’ve done in the past, so I wanted to be accurate and respectful, but obviously not super realistic with everything. I put much more modern day stuff into the medieval scenes, though… like TVs and an Atari, and what not.”

What things particularly influenced the way in which you developed the ‘look’ of the character, and how much input did writer Robyn Eversole have regarding the visuals?

“Robyn actually wasn’t involved in the illustration process too much. We sent her the drawings and she said, ‘Yeah, cool!’ It was mostly Namrata [the editor] and Sonia [the art director] who gave me feedback. I sketched some ideas and they would critique them and give me sweet feedback. We settled on things together.” 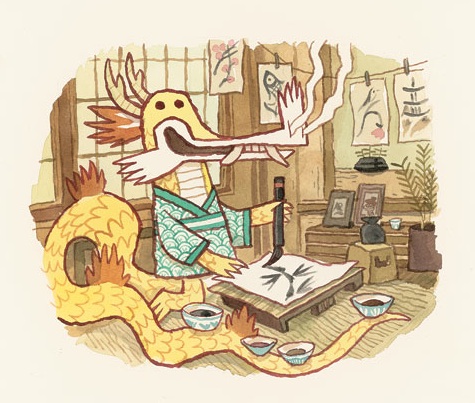 East Dragon seems more culturally proactive than West Dragon, doing calligraphy and what not; heck, he even wears a kimono. Do you think he really is?

“Yeah, I think East Dragon and his brothers and sisters are very culturally proactive and respectful – that must be why they get along so well with the emperor and the other civilians. West Dragon is obviously in his own zone and doesn’t care as much, and the knights and kings are always sort of bothering him. They aren’t a happy family as much as in the East. That is how it seemed in Robyn’s story and I wanted to portray that a bit in how they lived.”

I could be wrong, but you seem to dig working with Australian writers. What’s the attraction?

[Laughter] “It is true. I just find myself hanging out with Australians in the strangest places. Those guys are always strolling about town.” 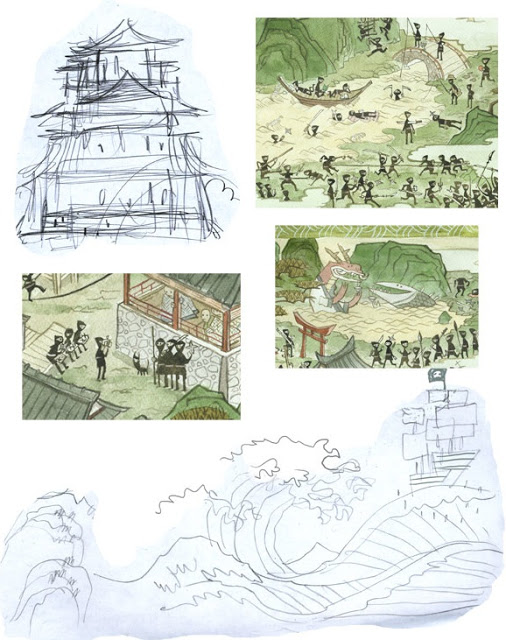 Your back catalogue is littered with images of zany ninja, kaiju-style monsters in onsens, and other Japanese-influenced asides. What’s the attraction of Japan in general, and in particular in visual terms?

“I’ve been obsessed with Japan ever since I visited with my two friends in the year 2000. My friend’s father lived in Kumamoto, in the south [in Kyushu], and he took us all over Japan to visit his old bros. It was an unbelievable trip because each of his friends had a completely different personality. There was the one old bro who lived in the mountains with his family creating ceramics in a huge kiln that he built. There was the businessman who lived in Kyoto, the super sporty fellow who took us waterskiing on a lake near Osaka, the wild dude with ferrets running all over the place in Tokyo. It was an amazing trip. A few years later, I went back with about twenty friends to do an art show in Tokyo with an art collective that I went to art school with. But I really just fell in love with everything there, from the vending machines and cartoon characters on everything, to how pleasant everyone was to us. And how clean it was! I could go on about specific things that I liked, but it would be a long list. My art became super-inspired by what I saw on that first trip – I came back with lots of books and objects!” 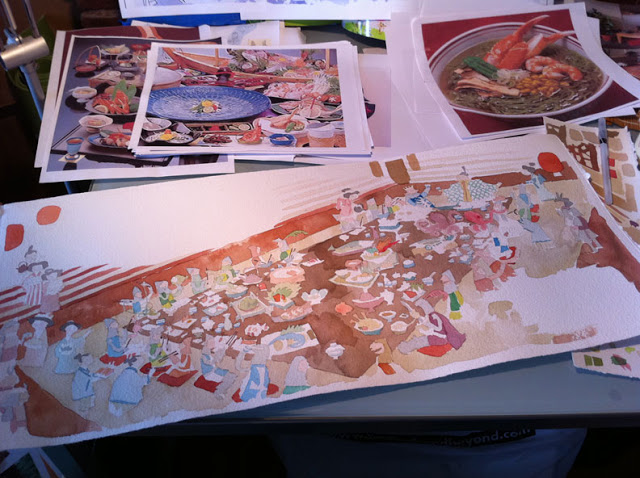 “Well, I love ‘Beat’ Takeshi and Akira Kurosawa. I mean, I guess ‘Beat’ Takeshi goes by something else with his films?  [He does – Takeshi Kitano]. I grew up loving Robotech and Ultraman – big, big influences on me. [Hayao] Miyazaki and [Katsuhiro] Otomo for animated films. [Shigeru] Miyamoto for video games. So many people! The creativity is so insane and super-inspiring to me… in everything. There is a reason why American television always looks to recreate Japanese game shows like Iron Chef and Silent Library. I am so happy that Japan exists. So happy!” 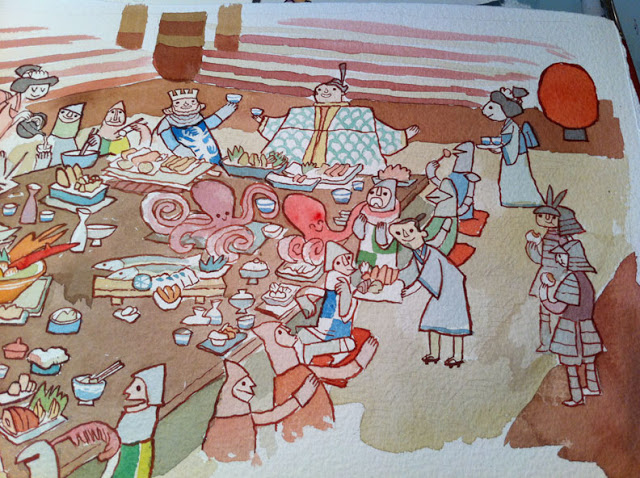