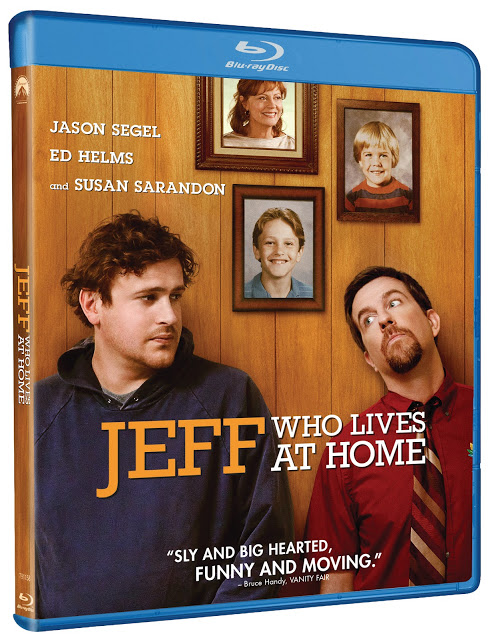 JEFF, WHO LIVES AT HOME

Two brothers with very different ways of looking at the world come together to help each other find their way in the “whimsical comedy” (Roger Ebert, Chicago Sun-Times) JEFF, WHO LIVES AT HOME, debuting on Blu-ray and DVD (both with UltraViolet™) June 19, 2012 from Paramount Home Media Distribution. The film will also be available On Demand and for Digital Download on June 15, 2012.

Jason Segel (Forgetting Sarah Marshall) as the hapless title character, Ed Helms (The Hangover 1 & 2) as his slightly more accomplished brother and Academy Award® winner* Susan Sarandon as their long-suffering mother are “beyond wonderful” (Peter Travers, Rolling Stone) in this quirky and hilarious comedy from Mark and Jay Duplass (Cyrus).

JEFF, WHO LIVES AT HOME is the story of one man’s hilarious search for the meaning of life. As slacker Jeff stumbles towards enlightenment, he uncovers answers to his nagging family’s problems. Jeff has no idea where he’s going but when he finally gets there, he might just find out what it’s all about. Judy Greer (The Descendants) and Rae Dawn Chong (“St. Elsewhere”) also star in this delightfully entertaining film that is “funny, tender and ultimately moving” (Mark Adams, ScreenDaily.com) and is filled with “moments of comedy gold” (Lou Lumenick, New York Post).

All Blu-ray and DVD releases available for purchase will be enabled with UltraViolet, a new way to collect, access and enjoy movies. With UltraViolet, consumers can add movies to their digital collection in the cloud, and then stream or download them – reliably and securely – to a variety of devices.