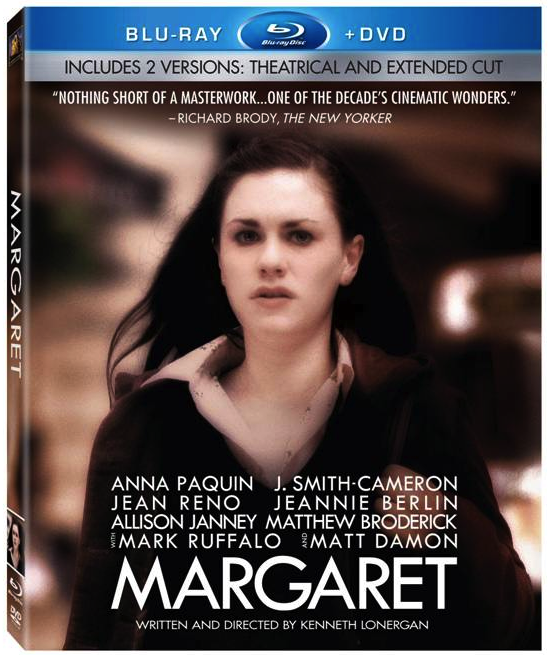 
Hailed as “one of the decade’s cinematic wonders” (Richard Brody, The New Yorker) and named “one of the best films of the year” (Roger Ebert, Chicago Sun-Times), MARGARET is “ambitious, affecting, unwieldy and haunting” (Ann Hornaday, Washington Post)
and features complex performances from a powerhouse cast including Anna
Paquin, as the film’s eponymous heroine (TV’s “True Blood”), Mark
Ruffalo (The Kids are Alright), Matt Damon (We Bought a Zoo, Invictus),
and Matthew Broderick (Wonderful World).


Synopsis: From Academy Award® nominated* writer/director Kenneth Lonergan (You Can Count On Me) comes a stirring drama Rolling Stone
calls “a film of rare beauty and shocking gravity.” Anna Paquin, Matt
Damon and Mark Ruffalo lead a celebrated cast in the story of a
Manhattan teenager whose life is profoundly altered after witnessing a
terrible accident. Experience an emotional teen’s extraordinary journey
to set things right as her innocent ideals come crashing against the
harsh realities of the adult world. It’s an “extraordinarily ambitious
film,” raves Time Magazine.