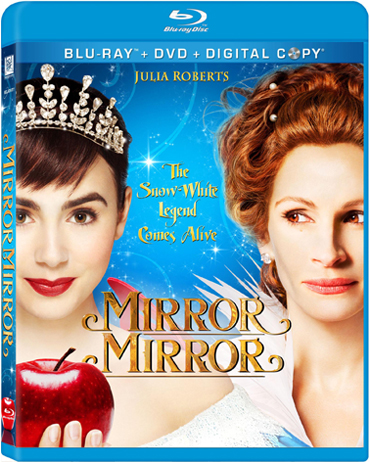 A FRESH AND FUN MOTION PICTURE BASED ON THE SNOW WHITE LEGEND
MIRROR, MIRROR
With Magical Extras and Special Features,
Enjoy the Classic Tale Retold on Blu-ray and DVD June 26

Directed by visionary filmmaker Tarsem Singh (Immortals), MIRROR MIRROR is a visually-spectacular, fresh and funny retelling of the classic Snow White legend. This family comedy features a star-studded cast including Academy Award®-winner Julia Roberts as the evil Queen, breakout star Lily Collins (The Blind Side) as Snow White, Armie Hammer (The Social Network) as the Prince, and Golden Globe® nominee Nathan Lane as the hapless bungling servant to the Queen. The film also stars Sean Bean (Game of Thrones) as the King and Mare Winningham (Brothers) as Baker Margaret and showcases the stunning costumes from Academy Award®-winning designer Eiko Ishioka (Dracula).

The Blu-ray includes sparkling extras including a behind-the-scenes featurette, a toe-tapping dance-along to the reworked Nina Hart song “I Believe in Love” performed by the film’s Collins that plays over the end credits, interactive digital storybook, deleted scenes and much more.

MIRROR MIRROR tells the story of Snow White (Collins), a princess in exile and the evil Queen (Roberts) who ruthlessly rules her captured kingdom. Seven courageous rebel dwarfs join forces with Snow White as she fights to reclaim her birthright and win her Prince in this magical comedy filled with jealousy, romance, and betrayal that will capture the hearts and imaginations of audiences the world over. The film is produced by Bernie Goldmann (300), Relativity’s Ryan Kavanaugh (The Fighter) and Brett Ratner (Rush Hour franchise). MIRROR MIRROR’S screen story was written by Melisa Wallack, and the screenplay was written by Marc Klein and Jason Keller.

MIRROR MIRROR was theatrically released by Relativity Media and will be available on Blu-ray and DVD June 26 from Twentieth Century Fox Home Entertainment.