Today, May 11th, marks the 108th birthday of the most famous and, arguably best, surrealist painter of all time, Salvador Dali.

Everyone knows him even if they don’t necessarily recognize his work…although if you don’t recognize The Persistence Of Memory, then you went to the wrong school.

What many people don’t know is that he had a small career in Hollywood. 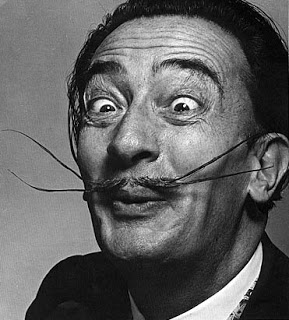 Let’s take a quick look at that career and his work.

16 minutes of pure surrealism. This was the dream child of Dali and filmmaker Luis Bunuel. The film starts with one of the most startling images ever put the film, a man slicing the eyeball of a girl. Then the movie gets even weirder with ants crawling out of hands, a man fondling a woman’s breasts (both clothed and unclothed), non-sensical title cards saying things like “Sixteen years earlier”  and a man dragging two pianos with dead cows on top of them and living priests (one of which was Dali) behind. There’s a reason why David Bowie used this film to open his concerts during his Thin White Duke years. It’s a short film so big that even The Pixies couldn’t do it justice.

A bit more linear than Un Chien Andalou, but that’s not saying much. Dali and Bunuel had a falling out just before production started, so he didn’t have much to do with that end of business, but he’s all over the story. L’Age D’Or starts out as an innocent documentary about scorpions and ends up being an indictment of the church and aristocrats. The “story” follows a couple who are in love, but they just can’t quite seem to consummate their romance. But that’s not what’s important. There are women sucking the toes of statues, a man throwing feathers around his bedroom, a man killing a child for no apparent reason and a group of men who are only able to go on because they have accordions, hippopotamuses, wrenches, mountain goats and paintbrushes. The film caused a huge ruckus in Italy at the time and was actually out of circulation for almost 50 years, not getting an American debut until 1979.

A bit melodramatic by today’s standards and includes a ski scene about as realistic as the backgrounds of Episode I, but it’s still a gripping story of an analyst (Ingrid Bergman) who is trying to figure out how the man she loves (Gregory Peck) was involved in the death of the psychiatrist that he was impersonating. Hitch’s second job for David O Selznick was just as unhappy in its production as his first (Rebecca), but it’s one of his minor masterpieces, so it was worth it. The centerpiece, though, was the surreal dream sequence designed by Dali. It was originally supposed to run for 20 minutes, but budget and time restraints forced them to cut it down to two. That’s unfortunate because it’s a doozy with melting wheels, faceless men and giant scissors cutting eyeballs. Can’t imagine where that image came from…

In 1946, Walt Disney wanted to do another anthology film. Of course, he called up his good friend Salvador Dali to create one of the segments. Unfortunately for all involved, the project was abandoned after only 15 seconds were animated, but the story had already been written. Nearly 60 years later, Roy Disney decided that it was time to finish the film. Not as surreal as Un Chien Andalou, but still definitely a Dali painting come to life, Destino is the story of a young woman who has fallen in love with an unobtainable man. She turns into a dandelion to float towards him and melts into the ground. Ants come out of a hand. She dresses in a bell. Basically, the six and a half minute film references all of Dali’s most popular works, but still manages to tell a story that pulls at the heartstrings, all with amazing animation. I’m not sure which part was animated in the 40s, but I’m glad that Roy decided that it was time to wrap production.

This one’s a bit of a stretch, but Dali didn’t have a lot to do with a whole lot of films, so deal with it. Woody Allen’s Parisian version of Manhattan (check out that opening montage that makes Paris look like New York City) is all about a writer (Owen Wilson) who takes magical accidental trips back in time to the days of The Lost Generation. He meets the Fitzgeralds, Hemingway, Gertrude Stein and, of course, Dali. The great artist and his mustache are always seen with his old Un Chien Andalou director Luis Bunuel and their friend Man Rey. (Rey’s first film debuted with their first film.) Adrien Brody’s portrayal of Dali is maybe a bit over the top, but that’s fine. So was the real man. He gets some of the funniest moments of a great film. It’s good to know that even 25 years after his death Dali can still make an impression.

In this article:Art/Design, Movies/DVD, Top List, Written by Mark Wensel