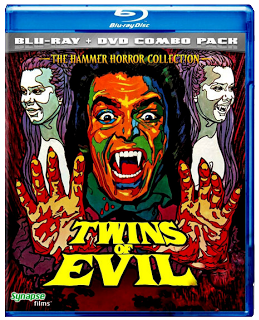 Luscious Playboy centerfold twins, Mary and Madeleine Collinson, bring new blood to the legendary Hammer Films fold in this new transfer of a most elusive film in horror history, John Hough’s TWINS OF EVIL, now on Blu-ray and DVD from Synapse Films!

The village Count (Damien Thomas, Never Let Me Go), is an evil man who secretly practices Satanism, uses black magic and transforms into a bloodthirsty vampire. Unhappy with her new life, Frieda seeks escape and tragically falls under the spell of the Count. Now overcome with an insatiable delirious hunger for fresh human blood, Frieda has to hide her secret from her sister, and escape her uncle’s killing grasp!