Here’s a chance to plan your weekend viewing without having to worry about the crowds who are seeing The Avengers. 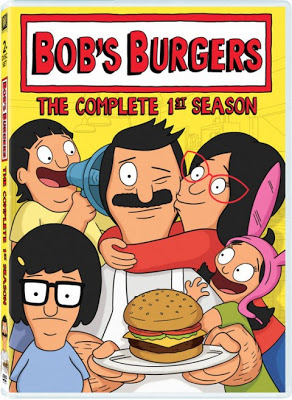 Bob’s Burgers is the quintessential Fox series, more akin to the family comedies as Malcolm in the Middle and Married With Children, than the animated ones like The Simpsons or Family Guy.  The series focuses on a fairly dysfunctional family and their business, in this case, a burger joint.

It’s funny and very weird, but like King of the Hill, it’s the kind of series that could have been produced in live action, but works better in animation.  The outrageousness comes from the characters and their personalities, rather than crazy antics and hijinks.  In many ways, it’s a pretty standard sitcom, but unlike many of the shows on Fox’s Animation Domination, this family seems to genuinely care for one another.  And, thankfully will never suffer from the live action family sitcom “kiss of death”, the aging and awkward puberty years of the child actors.

Extras are plentiful, with commentaries (sometimes multiple) for each episode, audio outtakes, original network presentation, a music video, featurettes and more.  Bob’s Burgers is an extremely entertaining sitcom with some memorable characters and strong writing and comes highly recommended. 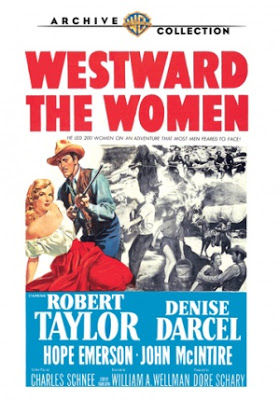 I was completely unaware of the existence of this gem prior to watching it.  Directed by William A. Wellman (based on a story by a little known writer, Frank Capra!), Westward The Women focuses on the struggles and challenges of being a female during this tumultuous time.

Robert Taylor plays a trail boss who is shepherding 138 women across two thousand miles of American wilderness who have agreed to marry a hundred lonely male settlers in California, and presumably make a new life for themselves.  Among the women we have an unwed mother, widows, and former showgirls trying to improve their lot.

Taylor is immediately confronted with his team breaking his non-fraternization rules; the results of which immediately makes the journey even tougher.

One thing I really enjoyed about the film is that despite it’s age, it never feels clichéd.  The characters, even the stock ones, felt distinctive.  Most importantly, women are portrayed as being as capable as any of the male characters.  Extras include an audio commentary, featurette and trailer; unusual for Warner Archive titles, but refreshing.

Westward The Women is truly an undiscovered gem and truly worth discovering.  Recommended. 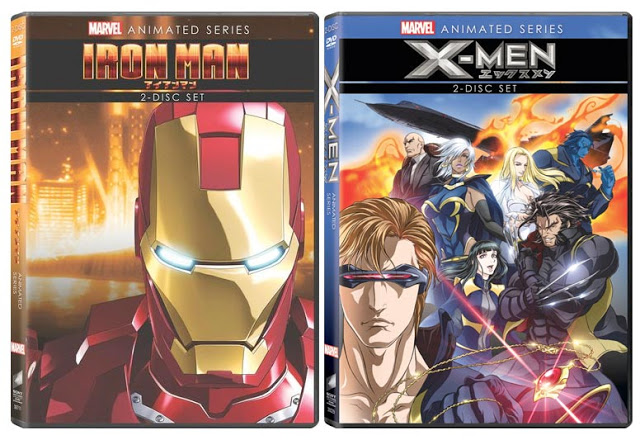 The first two DVD releases from Marvel Anime both feature the same successes and failures.

The animation is terrific.  Seeing the traditional Marvel characters both depicted and reimagined was a blast.  From capturing the mecha connection in Iron Man, to depicting the stylized interpretations of the X-Men, both volumes score immensely with the visual end of the release.

Unfortunately, as pretty as they are to look at, both neither series’ writing seems to gel, despite being written by comics vet Warren Ellis.  Iron Man fares better, with a bit of a streamlined storyline and less characters in it’s ensemble, but X-Men seems to lose it’s direction more often than it should.

The action is kinetic, but unfortunately, neither volume is as fun as I’d hoped they would be.  Each volume has a well known actor in it’s lead; Adrian Pasdar (Heroes, Near Dark) voices Iron Man and Scott Porter (Friday Night Lights, The Good Wife) voices Cyclops.  Both releases also offer their original Japanese voice track as well and a number of well-done featurettes.

Marvel Anime: Iron Man and Marvel Anime: X-Men don’t necessarily make good on my own expectations based on the talent; I’ve long been a fan of Animation Studio Madhouse and writer Warren Ellis.  Nevertheless, for fans it might be well worth your time.  Mildly recommended. 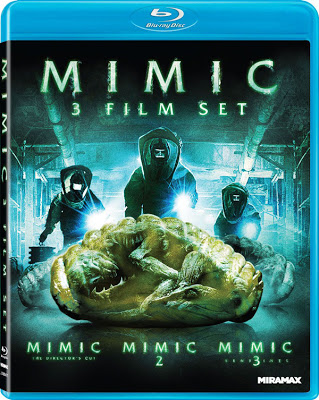 Knowing perfectly well that there isn’t much demand for the sequels, Lionsgate has wisely released the “trilogy” in a single release.  Included is director Guillermo del Toro’s director’s cut of the original film.  Mimic is a pop-science thriller revolving around a genetically engineered cockroach designed to kill the cockroaches that are carrying a deadly plague that is killing the children of New York,  Five years later, there’s something entirely new and dangerous to deal with.  The second and third films lose del Toro and much of the originality and become fairly standard B-movies, with several recognizable character actors involved.

I’m in the minority, but I actually dig the entire series.  The original film is truly a must see and must own; but more importantly, it’s smart enough to establish the mythology.  Although Mimic 2 and Mimic 3 (aka Mimic 3: Sentinel) are fairly cheesy, they are extremely watchable and entertaining.  By direct to DVD standards they are pretty solid little films and if nothing else, are better than their reputation indicates.  Extras include commentary (on 1 & 3) deleted scenes, featurettes and more.  Mimic is a highly enjoyable genre film and if you’re a monster fan, the sequels are definitely worth your time.  Recommended.