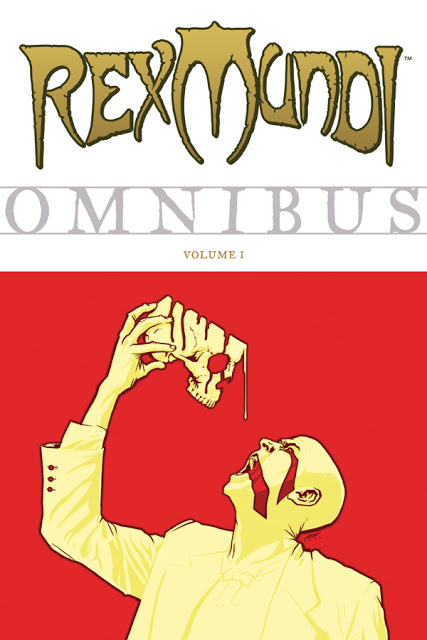 Arvid Nelson’s critically acclaimed Rex Mundi gets collected in two omnibus volumes and returns in the Eisner-nominated anthology Dark Horse Presents #15, with a new tale of murder, mystery, heresy, and the occult!

Paris, 1933. Europe is still in the grip of feudalism, sorcerers stalk the streets at night, and secret societies vie for power. When a medieval scroll disappears from a Paris church, Dr. Julien Saunière begins uncovering a series of horrific ritual murders connected to the Catholic Church. His investigation turns into a one-man quest to uncover the deepest secrets of Christianity, a trail of conspiracy that extends all the way to the walls of Jerusalem during the First Crusade. Rex Mundi is the tale of a quest for the Holy Grail told as a murder mystery, set in a world where magic is real and the Catholic Church never lost its grip on power.

“I’m thrilled Dark Horse is making Rex Mundi available in an omnibus format—it’s the way it was always meant to be read! The story in Dark Horse Presents is the perfect introduction for new readers, and I think old-timers will get a kick out of it, too. We open things up with the Holy Inquisition in Paris, the day before the main story line begins,” stated Arvid Nelson.

About Dark Horse
Founded in1986 by Mike Richardson, Dark Horse Comics has proven to be a solid example of how integrity and innovation can help broaden a unique storytelling medium and establish a small, homegrown company as an industry giant. The company is known for the progressive and creator-friendly atmosphere it provides for writers and artists. In addition to publishing comics from top talent such as Frank Miller, Mike Mignola, Neil Gaiman, Brian Wood, Gerard Way, Felicia Day, and Guillermo del Toro, and comics legends such as Will Eisner, Neal Adams, and Jim Steranko, Dark Horse has developed its own successful properties, such as The Mask, Ghost, Timecop, and SpyBoy. Its successful line of comics and products based on popular properties includes Star Wars, Mass Effect, Buffy the Vampire Slayer, Aliens, Conan, Emily the Strange, Tim Burton’s Tragic Toys for Girls and Boys, Serenity, and Domo. Today Dark Horse Comics is the largest independent comic book publisher in the US and is recognized as one of the world’s leading publishers of both creator-owned content and licensed comics material.