Perhaps you also had a gun that made people vanish into thin air forever.  Now let’s say that there just wasn’t much to do with these powers because people tended to not need to get beat up that often, and using the ray gun to completely obliterate someone from existence was so extreme it seemed hard to imagine doing it.

You’d do a lot of nothing and probably just hang out a lot.

That’d make for a weird hero, wouldn’t it?

Well, Daniel Clowes has created a tale that is equal parts about heroes, the dull reality of life, and how stressful it can be growing up, with the result being something quite enjoyable—and with Clowes artistic style it is wonderful to view as always. 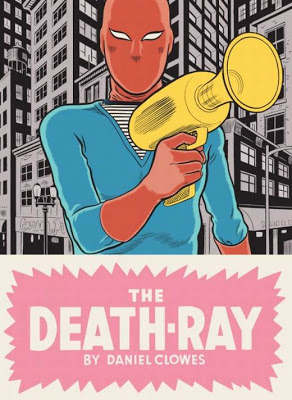 Daniel Clowes is a highly esteemed writer and artist in the comic field.

He isn’t what you would call a mainstream super-hero person, instead doing his critically acclaimed books such as, Ghost World, Wilson, and other projects. 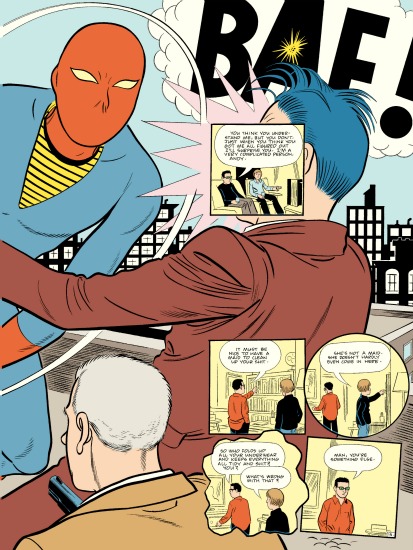 However, in his comic series, Eightball, with issue #23 he told a very odd super-hero story done in his unique style.

That story has been reprinted as a hardcover that looks beautiful in its huge size and allows those of us who missed the story the first time around to enjoy it.

What’s the story about?

Andy is a seemingly normal teenager–besides having had a somewhat tough life and being pretty skinny.

Between both his parents dying (he lives with his grandfather) and having a girlfriend that’s hundreds of miles away pretty much the only positive in his life is his friend Louie.

After Andy discovers that nicotine of all things gives him super-strength however, he and Louie set out to right wrongs and be heroes.

The thing is, just going around looking for trouble tends to be pretty boring. In fact, as the story goes on Andy seems to be causing more trouble than good—especially when he comes into possession of his father’s death-ray gun.

Even though this is on its surface a super-hero story, so much of the focus of this comic is on Andy and his relationship with other people.

His grandfather, the far-away girlfriend he longs for, the maid, and especially Louie all play a role in this tale to some degree. The portrayal of Andy and Louie’s friendship is one that is equal parts sweet and awkward with a hint of tension clearly evident in Louie’s thinly-veiled jealously of Andy’s abilities and weapon.

There is also very little actual showing of action in the comic, with much of it only being hinted at. Instead of seeing a punch thrown we see the bloody fist as a form of aftermath, and then instead of seeing the death-ray shot, we only witness the eerie emptiness of where something living once stood where Andy fired his powerful gun.

Excluding a gorgeous double-page splash and a few other pages, we rarely even see Andy in a super-hero outfit. No, this is a comic that is as much about being a teenager and growing up as it is doing super-heroics or having a sci-fi weapon. 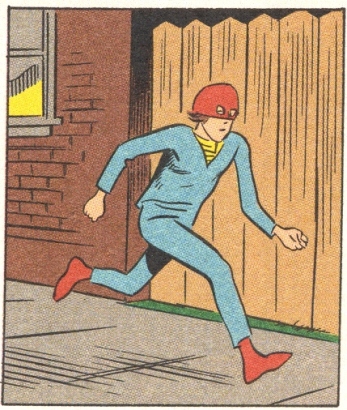 As I’ve mentioned at various points, Clowes art is a joy to look at.

He can draw in a realistic style for grounded moments or in a cartoonish or surreal style for imagined bits and dreams.

Clowes’ use of the page through a splitting of panels is utilized masterfully, resulting in a comic that oftentimes has a design of individual Sunday newspaper strips, with the format used to illustrate different points in time.

It’s a clever way of using the comic format and having time pass without having to always blatantly tell the reader we’ve entered a new day/week/month.

The Death-Ray, is a super-hero story, but one quite different than what some people may be used to.

It’s also a great story about the stresses of growing up.

Plus, the art is so pretty to stare at. If you’re tired of cliché super-hero yarns and want something that has super-powers and the like but with a twist, this is a good choice.

Just stay out of the range of that death-ray. 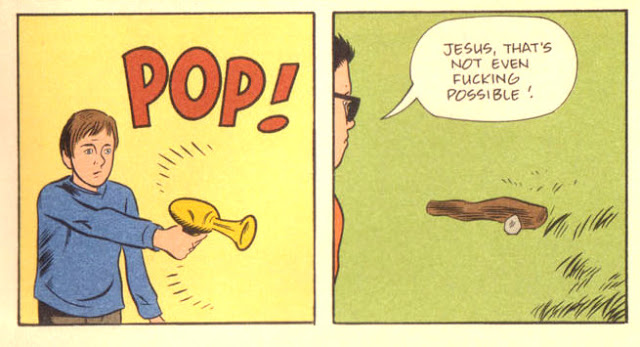