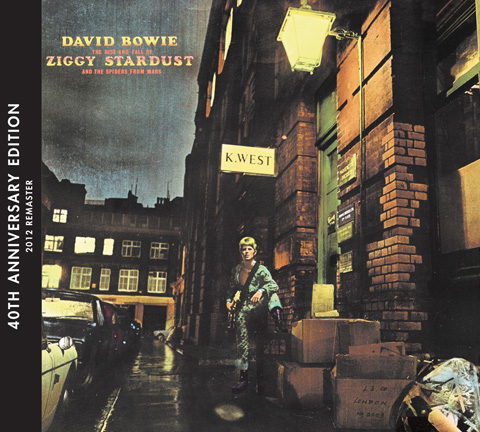 EMI is excited to announce the release of a 40th anniversary edition of David
Bowie
’s truly groundbreaking and hugely influential album, The Rise and
Fall of Ziggy Stardust and The Spiders From Mars.

Originally released through RCA Victor on 6th June 1972, Ziggy Stardust was
David Bowie’s fifth album, co-produced by Bowie and Ken Scott. Incredibly, the
album was written whilst Bowie was recording 1971’s Hunky Dory album,
with recording beginning a couple of months before that album’s release. It was
recorded at Trident Studios, London between 8th November 1971 and 4th February
1972, with the line up: Mick Ronson (guitar, piano, backing vocals, string
arrangements), Trevor Bolder (bass), Mick Woodmansey (drums), Rick Wakeman
(keyboards) and backing vocals on ‘It Ain’t Easy’ by Dana Gillespie. As well as
performing vocals, Bowie also played acoustic guitar, saxophone and harpsichord
on the album and was involved in the arrangements, too.

The album’s influence is immeasurable –
it converted legions of fans, becoming the zeitgeist and a major influence on
the next generation, particular those who were involved in the punk movement –
musicians, artists, designers – and the subsequent re-birth of rock and pop. ‘

This 40th anniversary edition has been remastered by original Trident Studios
engineer Ray Staff (at London’s Air Studios). It will be available on CD and a
special, limited edition format of vinyl featuring the new 2012 remaster with a
5.1 mix and high resolution audio on DVD – the DVD features previously
unreleased 5.1 and stereo bonus 2003 Ken Scott mixes of Moonage Daydream
(instrumental), The Supermen, Velvet Goldmine and Sweet Head.

And we’re giving away three copies of the remastered CD!

To enter, please send an email with the subject header “ZIGGY” to
geekcontest @ gmail dot com and answer the following question:

David Bowie changed his name so as not to be confused with this pop singer?