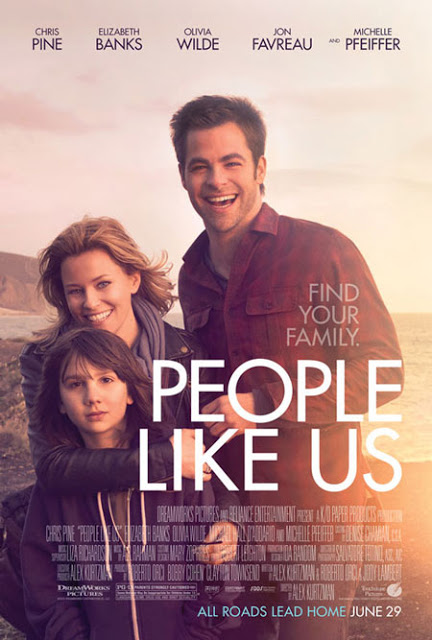 When slick wheeler-dealer Sam (Chris Pine) is tasked by his late music producer father with delivering $150,000 to a person he’s never even heard of, it touches off a series of events that will forever change the way he sees the life he thought he knew.

While there may be nothing truly new under the sun in People Like Us, it nevertheless entertains thanks to strong central performances from Pine and Elizabeth Banks as siblings unaware of the other’s existence, and equally solid supporting turns by Michelle Pfeiffer in a barely there mom role that she manages to milk for all it’s worth; and Michael Hall D’Addario (channeling Shia LaBeouf), as Banks’ troubled son in desperate need of a father figure.

For his first feature, director/co-writer Alex Kurtzman does a commendable job of letting his actors draw your attention away from the soapy buildup that coats the film (specifically a pending inquiry that is forcing Sam back to New York and an untreated parental illness) and brings the proceedings full-circle in the wholly satisfying closing moments that will make you forget any of the movie’s shortcomings.

Unless you’re a heartless bastard. Or were weirded out by the incest vibe that unfortunately came courtesy of the chemistry between the two charismatic leads.

In this article:Movie Review, Written by B.S. Walker