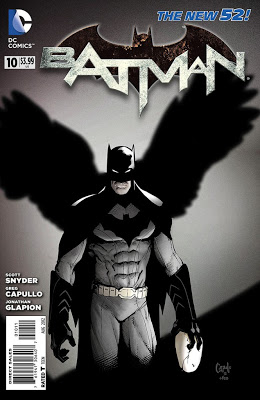 This comic book was one big blur of Bat goodness.

I had to read it a second time to make sure because the hints that lead to the big finish were all over the place.

Batman has finally gotten the best of the Court of Owls, but the mystery gets even deeper as a note was found at the Court’s lair telling the Batman to meet him at an abandoned hospital. When the dust settles and the smoke clears, Lincoln March, who we thought was dead in issue nine, is really SPOILER (HIGHLIGHT TO READ): Thomas Wayne, Jr.

The creative team brilliantly laid this out as the suspense rose with each turn of the page. In the end, Lincoln being Bruce’s brother could all be a ruse. However, the events in the back up story “The Fall of the House of Wayne” makes it difficult to believe the vengeance filled March is lying. 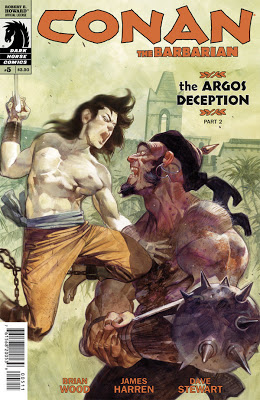 Part Two of the “Argos Deception” lives up to it’s name as Conan is moments away from his date with the hangman’s noose until an offer of increased entertainment is accepted.  The catch is that a weakened and shackled Conan has to fight Messantia’s fiercest warrior in the name of spectacle and freedom.

Fighting is nothing new to comics, but James Harren’s panel-by-panel sequencing of the encounter is beyond impressive. Blood splattering visuals and bone breaking imagery perfectly captures the pain and struggle Conan is enduring.

The geek-out moment of the book comes when the warrior reveals, in a sadistically smug manner, that he has possession of the Atlantean Sword.

The narrative reads, “It was at this moment the Cimmerian knew he would kill this champion and it would be a matter of seconds, rather than minutes before it was all over,” as Conan stares at him with sheer hatred.

If this is a book that you generally pass on because you have never seen the movie then fear not; Brian Wood has produced some amazing stand alone stories that appeal to anyone who wants to read up on a great adventure.

This is one of my favorite single issues of the year and I’m not saying another word about it because I want you guys to check it out ASAP. 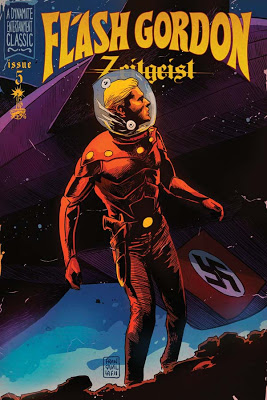 Dynamite continues to bring on the action and excitement that delivers in spades.

This series contains many of the things you have come to love about Flash Gordon, but then the twist hits you right between the eyes.

The story shifts between Mongo and Earth as Ming and Hitler are in league with one another. Ming helps Hitler take over the world and in exchange Hitler serves as a stand in ruler for Ming.

In this issue, three fugitives from Mongo are hiding from Nazis and Ming’s forces while on Mongo, Flash Gordon and Prince Barin duke it out in an under water slugfest.

All of this and more is going on while Ming plans to marry Dale Arden.

I was critical of Dynamite Entertainment’s Pantha comic book that debuted last week. While it was a good effort with potential, there was way too much going on story wise. Sometimes, less is more and other times more is absolutely awesome. This series has a lot going for it with Daniel Indro’s grand art style complimented by Mujiono’s wonderful color treatment. Eric Trautman’s script provides a real sense of adventure for an entire 32 pages that I urge everyone to get their hands on. 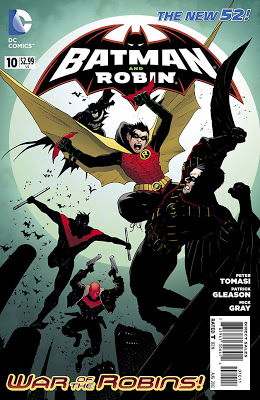 When you see a cover like this, you can’t help but salivate at the possibilities it can bring.

While Robin has played an important role in the Batman franchise, this particular series belongs to one Damien Wayne.

The newest Boy Wonder feels disrespected by the lack of respect he is getting from previous Robins; Damien’s arrogance is palpable as he alreay believes he is better than predecessors Dick Grayson, Jason Todd and Tim Drake.

Once they all get into the same room, the previous three give Damien the little brother treatment. Would you take that type of treatment from the older brother if you felt you could beat him up? No, you wouldn’t and Damien doesn’t either. He takes it one step further by proclaiming his intentions of taking them out one at a time which doesn’t sit well with the seniority for different reasons. 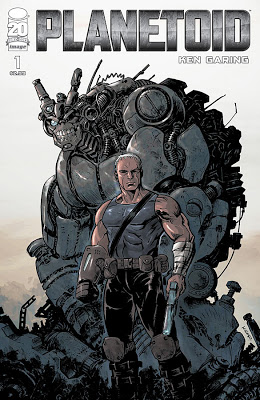 During his travels he meets an old-timer named Mendel who is also stranded on the planet. We learn about Silas’ past along with the real reason why he crashed onto the planet.

The book started off with a nice, slow build and leads to the first bit of action involving the creature. The coloring of the depictions is a majority of grays and black with some lighter colors used to show the dreary weather.

Not a bad start at all to a new series with a lot of backstory to build off of. 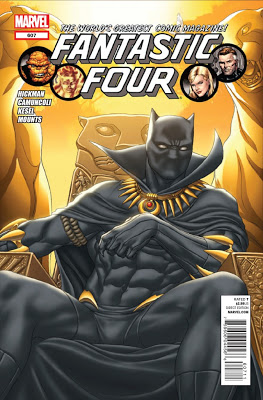 I haven’t enjoyed a Fantastic Four comic book this much in a long time!

That is not to say the books were lacking anything in particular.

Reed, Sue and the Future Foundation travel to Wakanda at the behest of T’Challa. Reed believes he was summoned to help with the nation’s economic struggles since all of the world’s Vibranium has been rendered inert.

In my opinion ,Jonathan Hickman is the M. Night Shyamalan of comic books and you can take that however you want.

Camuncoli and Kesel’s art produced some strong visuals from the Foundations arrival to the flashback scenes of Wakanda’s mysterious past.

Every little crevice of the story just keeps you sucked in because there are some real stakes involved that effect the entire Marvel Universe. 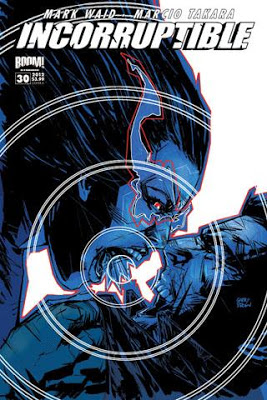 All good things must come to an end as it feels we hardly got to know Max Damage as his stance on not doing bad things changes in the face of human extinction from a radiation cloud.

The Pultonian, who is a good guy gone berserk, throughout the series saves the day when the world thought he was not an option.

He and Damage have one more final battle as both are rendered powerless to make it a fair fight.

One of the amazing things about Mark Waid’s writing is the refreshing honesty his characters exhibit no matter what side of the fence they are on.

Waid stated in an interview that he currently stretched thin on a personal and professional which lead to his decision to cancel this series along with it comic book counterpart, Irredeemable.

I think this series will return at some point, since one thing in particular was left unanswered and unseen. 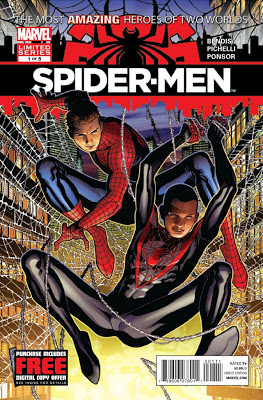 The original Ultimate Comics Spider-Man crew is back together with the first installment of this highly anticipated series.

One of the things that drew me to the series is how this creative team would handle the original Peter Parker. For years everyone wanted to see the two web crawlers find a way to team up and now they finally have. Some might be disappointed that it’s Miles Morales, but I think there is a little more of a story here since he is new to the super hero game and he is a different person all together.

The panels with Peter web slinging through the New York skyline and taking in the sights and sounds of the city are beautiful.

They convey to the reader how much he loves his home so sympathy and intrigue will emerge as he enters the Ultimate universes’ Earth.

Miles is barely in this issue, but that was definitely the right call since his since his one page appearance made more of an impact then him being in every page. Peter is the visitor dealing with a whirlwind of emotions when he learns the Ultimate version of him is dead and that his identity was revealed to the world.