I’ve got a crazy concept for you…

What if the Hulk separated himself from Bruce Banner and instead of changing into one another depending on how angry our titular hero was they were just two different people?

Now let’s say upon doing this the Hulk goes off and relaxes with other monsters while meanwhile Bruce Banner turns into the dangerous one, creating ungodly monsters in an attempt to re-gain his Hulk-ness (is that a word? Let’s say it is). 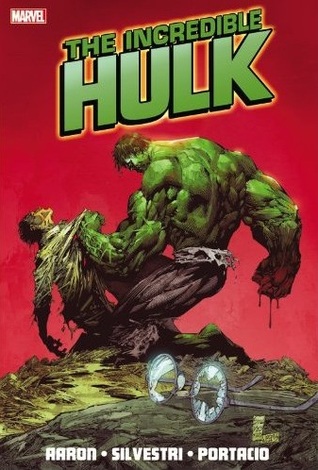 Yeah, that’s a concept I’d never thought of, that a freed Banner would actually now have no limitations and just go off the deep-end.

Well, writer Jason Aaron thought of it and gave us this highly enjoyable story.

Let’s explain where this comic came from.


You need to understand, there have been many Hulk comics.

Sometimes they are just titled, “Hulk,” other times, “Incredible Hulk,” and plenty of variations beyond that.

Some months ago Marvel re-launched their Incredible Hulk comic however, with Jason Aaron writing and Marc Silvestri providing art for the first 3 issues/chapters and Whilce Portacio for the fourth through seventh.

With the series fresh start Aaron did the aforementioned separation and the comic follows the fallout of that.

We don’t learn exactly how the Hulk was able to separate himself from Banner until much later in the story, and even then it’s kind of an odd explanation.

The rest of the comic is so enjoyable however, and not for the reasons I normally like a Hulk comic. You see, I am bored of Hulk comics when Bruce Banner is just…Bruce Banner. He’s a smart scientist who can’t get angry?

Wow, I’m shaking in my metaphorical boots with excitement.

When he becomes the Hulk though, that’s when I get a smile on my face. Yes, I often enjoy my comics with smart plots, political and social allegories, and the like, but sometimes you just want to read something with lots of stuff getting smashed. That’s why it is so interesting I actually enjoyed this comic the most when the spotlight was on Bruce Banner. This is probably because Aaron took him in a direction I hadn’t seen before; he let Bruce Banner be insane. 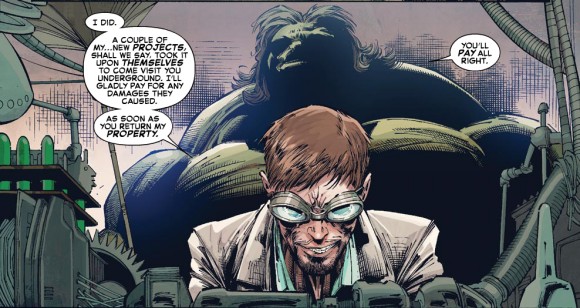 All of his life that was spent with the Hulk in his psyche Banner was miserable trying to be rid of the curse, but Aaron points out how without the Hulk to keep him in check, Banner is totally free…and just maybe the Hulk was what was keeping Banner sane.  Indeed, Banner went from a scientist who couldn’t get mad to simply a mad scientist. 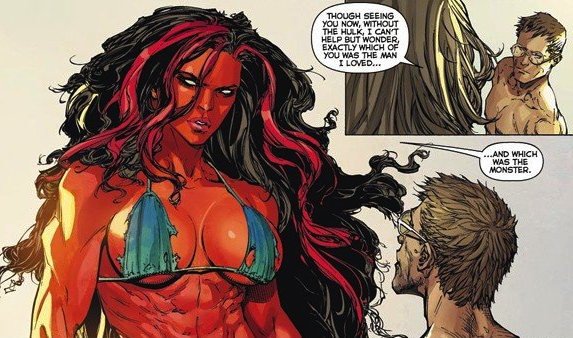 Banner is so desperate to become the Hulk again he’s infecting animals on an old nuclear-bomb-testing-island with all sorts of nasty chemicals that makes them hulked-out and quite hideous. All the Hulk wants is to be left alone in his new home in caves under the Earth, but as government agents come calling for his help and Banner lets his monsters attack it becomes clear our big green friend isn’t going to be able to just sit around.

Without spoiling much I’ll say Hulk and Banner do meet up face-to-face and it isn’t a happy reunion, there is indeed lots of smashing from both parties, and Aaron injects enough humor into his characters he makes the idea of the Hulk and a crazy Bruce Banner result in a comic that is both action-packed and fun. 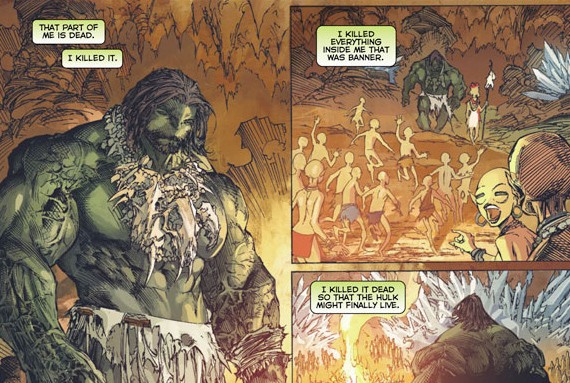 As for the art, Marc Silvestri seems to draw mixed opinions. Some people find his artwork style to be ugly, too scratchy, etc. etc. but I’m in the minority I suppose in that I like his art. Therefore, for the first three issues I’m very pleased with the great story I’m getting with Silvestri’s nice drawings. The problem arises in that Silvestri isn’t the fastest, so as soon as the 2nd chapter he’s getting assists on the art and by the fourth issue we just have a new artist.

Whilce Portacio is…good. I’m not overly impressed by his art but it doesn’t burn my eyes out like some things by artists I can’t stand.

The problem is I got a taste of the Cordon Bleu before it was taken away and replaced by a sandwich so I’m less than peppy about it. Then again, for people who hate Silvestri’s art Whilce Portacio  may be a welcome change. To each his/her own.

This is a great comic.

It’s got the Hulk smashing, Bruce Banner being interesting for once thanks to his new-found case of the crazies, and puts some humor in the proceedings too. Even if the plot revelation about how Hulk and Banner got separated struck me as a bit silly and the art wasn’t always amazing, I still found this comic to be awesome.

Go get a copy or I might get angry, and you wouldn’t like me when I’m angry…mainly because I start crying and boy do I sob mightily.

Yeah, I’m not as impressive as the Hulk, don’t judge.