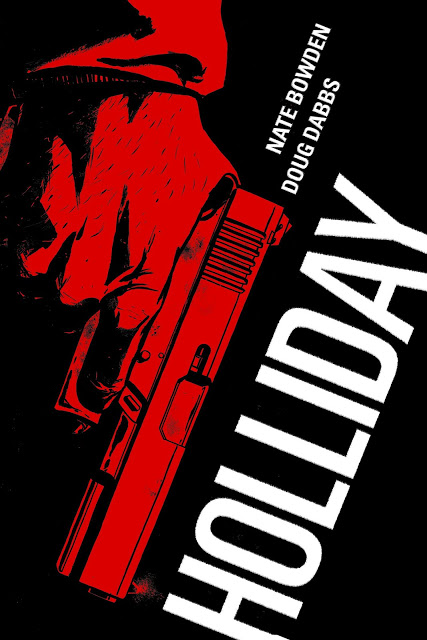 Back in the early 2000s I happened to meet a young chap named Nate Bowden who was then writing comics under his own label, FishStick comics. 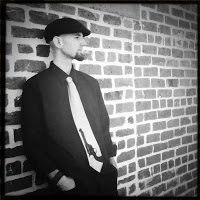 Those small books of nerd-power (called Nate and Steve) were a love story to superpowers, chicks, a certain car of Nate’s and an ode to art school that were so fun and well-crafted that Bowden and artist pal Tracy Yardley (Sonic the Hedgehog) were able to parlay their talents into a series deal with Tokyo Pop called Riding Shotgun about a world where assassinations are legal.

And where yours truly makes an appearance as a reporter (immortality rules!)

But sadly, after two books, Tokyo Pop dropped the storyline and Bowden was forced back into the world of idea pitching to various companies.

That is until he was able to sign a deal with Oni with the story of his favorite Historic character, Doc Holliday and his friendship with the Earp brothers.

After the break is an Interview with Bowden about Holliday and my plea for better birthday gifts now that my friend is finally getting some coin.

FOG!: For as long as I’ve known you, you have always been fascinated by Doc Holliday and the Earp family. What is it about them that made it impossible for you to NOT write about them?

Bowden: How long have you known me? Been a little while now, but yeah Holliday’s a fascinating figure. Of course my first exposure to the legend was Tombstone, it’s a mark on our generation. I guess it’s just the lawlessness of the era. What was acceptable, what was “legal” in certain terms. Holliday was a guy that pushed all those boundaries

FOG!: This re-telling is set in the present and Tombstone is a thriving, albeit crime-ridden, city. What made you decide to turn the story of the OK Corral into crime-noir instead of a Western?

Bowden: I guess what I’ve found is that in adapting this story into terms we can understand today, it makes the actions of the characters so much more real, and more human. Westerns were huge in film because it was something a lot of people could still relate to. Earp was consulting in Hollywood right up until his death in the 1920’s. (don’t check my facts on that) As we’ve gotten further from that time, Earp and Holliday have become characters in situations we couldn’t hope to understand. Western’s are essentially fantasy to us, so to set it in the 21st century brings it closer to home, as it were.

FOG!:  I know you did extensive research on Doc but I have to tell you, I really enjoyed the homage dialog to the movie Tombstone which, after-all is a flick you and I have seen about a billion times. Did you feel that it was important to give a nod to the George P. Cosmatos film when writing the story?

Bowden: No. In fact what you’re noticing there is less of an homage to someone else’s work and more a study of history. The lines and language that appear in both pieces are historically recorded statements from the judicial cases that surrounded the shoot out. Witness statements and newspaper clipping where citizens of Tombstone were quoted. We’re telling the same story after all, we’re just telling it differently.

FOG!: One of the only fictional liberties you took was changing Doc’s Tuberculosis into AIDS, what made you decide to do so?

Bowden: It was an attempt to kind of mirror the past. I didn’t make Tombstone a city because I like Metropolis and Gotham, I did it because for the citizens of Tombstone in the 1880’s, that’s how they saw their Boomtown. A city on it’s way to being the next New York or San Francisco. In the same way, Tuberculosis was a disease that was killing people with little to no explanation. Something to be diagnosed but never cured. The best parallel is H.I.V Aids. It reflects the stigma that the afflicted carried as well.

FOG!: The art work is very dark and sketchy which works well with the story, when you were paired with Doug Dobbs were you nervous about what his interpretation of your vision would be since you’ve been living with this story forever? And what was your feeling when you saw the first panel?

Bowden: Doug Dabbs, to me, was perfect for this book, and is easily 60% of why it was picked up. Oni was on the fence about the story without knowing what the book would look like. When James [Lucas Jones] paired me with Doug, his artwork on a sample excerpt was enough to tip the scales in our favor. Because of that I had a pretty good idea what the book was going to look like and I couldn’t be happier. He improved as an artist before starting on the actual script and you can see a progression in his work as you read as well.

FOG!:  The book has been doing really well in both sales and reviews, are you surprised by the reception? Am I going to start getting awesome birthday gifts now?

Bowden: I’ve read some nice things about the book and that’s great. I’m glad that people are finding some enjoyment in it. When is your birthday again?

FOG!: Finally, what’s next for you on the horizon?

Bowden: I wish I knew what the future held, but there are numerous projects I want to do. I’ve got a Sci-Fi story on the blocks and would love to “sequel” Holliday with a reimagined Billy the Kid. But most notably I’m hoping to do a steam punk inspired story about Nikola Tesla. There’s always a story to tell, you know that!

In this article:Book/Comic Review, Interview