Google wants to bring a wearable ‘head’s up display’ to the masses.

Imagine an Android phone in the form of glasses that you wear.

Images are projected onto your eyeballs, allowing you to see digital information while still seeing the world around you. A camera is built-in, as well as earbuds, a mic, and wireless connectivity.

The ‘augmented reality’ revolution is coming, and it will change everything.

The above video is a concept. But it represents what Google has in mind.

And it is the inevitable next step in how we interact with digital information. 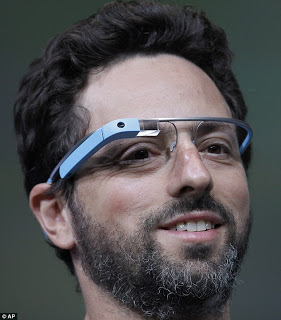 When Google first made their announcement, it was generally met with cynicism.

Who would wear goofy glasses that project distracting digital info onto their eyeballs besides huge nerds?

When it becomes cheap, and when the devices don’t look dorky, that is when adoption with mainstream adoption will begin to occur.

Google plans to have their devices available by 2014.

But cheaper, more powerful ones that are designed to be more elegant and virtually invisible, will probably not arrive for maybe 5 to 10 years.

But when you start to think about further possibilities, things get wild, fast.

Imagine this scenario: You are wearing your augmented reality (AR) device, walking down the street, and others are wearing the same devices, your AR device wireless detects theirs, and displays info about themselves that they have chose to share.

Basically, people could choose to become walking MySpace pages with flashy bling appearing to hover around them. 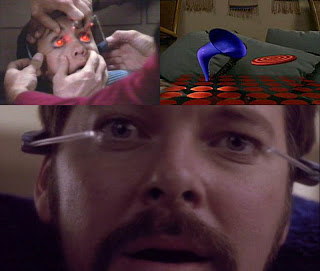 Like the iPhone and Android, it will be all about 3rd party apps.

The devices could have incredible implications for gaming.

Video games could leave 2D screens and enter reality. There are already iOS and Android apps and games that use their respective phone’s cameras to do AR, and Nintendo is already doing this with the DS, and to an extent, Microsoft if with Kinect.

And like with Kinect, creative hackers will push AR way beyond gaming.

The devices could be use to create new kinds of interactive art and music.

As this technology evolves, our reality will become more and more blended with a digital reality that is not limited by flat, two dimensional screens and handheld controllers, mice, or keyboards.

For decades we’ve been hearing about virtual reality, and we’ve had visions of holodecks someday arriving. Suddenly we are blindsided with the inverse. Rather than entering digital worlds, the digital world will be entering our ‘real’ world.

Still not comprehending the full implications of this Pandora’s Box?