Junction Point Studios and Disney Interactive are preparing for the upcoming release to their upcoming sequel game, Epic Mickey 2: The Power of Two.  Unlike it’s predecessor which was only available on the Wii platform, Epic Mickey 2 will be available on Wii, PS3, Xbox 360, and PC/Mac computers.

This time out, Mickey Mouse teams with Oswald The Lucky Rabbit and sends them to The Wasteland, an alternate world featuring eighty years of forgotten theme park attractions and Disney characters (so far we’ve confirmed that Horace Horsecollar, Ortensia, Gus the Gremlin, The Phantom Blot, Peg-Leg Pete, and the Mad Doctor all appear in the game; and I’m betting we’ll see Clarabelle Cow, Clara Cluck, Mortimer Mouse, Gideon Goat, Sylvester Shyster, Dinah the Dachshund, and Humphrey the Bear as well). 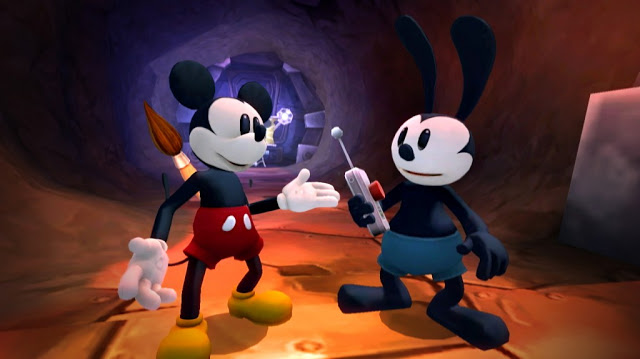 In the game, Mickey is armed with a magical paint brush that wields paint and thinner, and Oswald utilizes a powerful remote control that allows him to command electricity. This new co-op play combined with enhanced in-game physics will further enhance the idea that “Play Style Matters” – a unique approach to gameplay pioneered by Warren Spector where players dynamically tackle different challenges in order to explore all possibilities and story lines, but with consequences for their chosen actions.

With The Mad Doctor back from the first game, Mickey is summoned once again through the mirror into Yen Sid’s workshop to save the day.

The game play of the sequel is pretty much the same at the original with the player pointing where they want to spray paint or thinner and using the control pad to move Mickey. The only new thing is that this time around a second player can play as Oswald who uses a remote control and he can also use his ears to fly and detach his feet to throw them like a boomerang.  There are also some moves that they have to work together in order to use.  Regardless of a second player participating, Oswald will be a presence, serving as Mickey’s sidekick.

Within the game, everything is based on reality; be it Disneyland or Disney World or retired attractions such as The Adventurers Club, which makes this a wonderful nostalgiac environment for older gamers and an introduction for the newer generation.

There will also be a prequel graphic novel showcasing ten new stories that will be distributed digitally.


Epic Mickey 2: The Power of Two arrives on November 18, 2012
For more details, visit the Official Site and Facebook Page