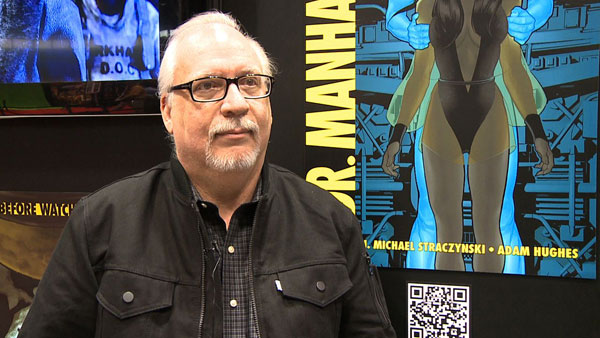 J. Michael Straczynski has announced the launch of a new trans-media company, Studio JMS, to handle his various projects under one banner, and to also cross-pollinate his various work, be it comic books, digital, TV series, feature films or video games.

The extremely prolific Straczynski has been the writer/producer of television’s Babylon 5 and Jeremiah, the screenwriter of such films as Thor, Ninja Assassin, Underworld Awakening and Clint Eastwood’s Changeling, and has established himself as a top, and sometimes outspoken comic book writer on such titles as Before Watchmen: Nite Owl and Dr. Manhattan, Superman, Fantastic Four, Squadron Supreme, The Amazing Spider-Man, Rising Stars and Superman: Earth One.

The studio will be co-run by Patricia Tallman, a sometime actress who is also the creator and co-owner of Talent To Go.

One of Studio JMS’ initial projects will be Straczynski’s directorial debut, The Flickering Light,  a fact-based
film about how Nazi propaganda director Leni Reifenstahl, making a film
that required Spanish actors, rented ethnic-looking Jews and gypsys,
men, women and children who were imprisoned in the Max Glan
Concentration Camp outside Berlin. During the course of the shoot, bonds
were formed between the “actors,” who were brought back to resume their
hellish existence in the camp after each day’s shooting.”

In addition, Studio JMS has plans to produce two web series for The Adventures Of Apocalypse Al (for MTV.com) and Living Dead The Musical; is developing two television series,  Epidemic and Vlad Dracula for
Starz, collaborating with Will Smith and Sam Raimi, respectively; and is reviving his Joe’s
Comics imprint at Image Comics, launching four titles in Spring 2013, Falling Angel, Ten Grand, Guardians and Sidekick.

With his focus on developing intellectual properties, Studio JMS also hopes to generate a film every 18 months.

Not including, of course, his two most recently completed two projects Vanishing Point and Shattered Union for producer Jerry Bruckheimer: