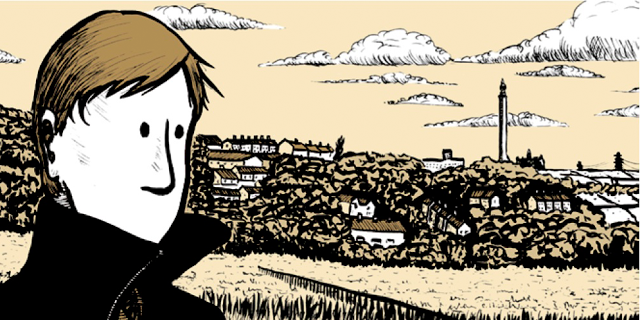 SEEDS by Ross Mackintosh has been garnering critical acclaim in the US and UK since its release in 2011. It tells the story of a man’s relationship with his terminally ill father.

“This is comics at its best. This is the death of Superman, the agony of Batman, the quest of Wolverine. And it’s all here in this simply illustrated book about a man losing his father to cancer.”

Benjamin Shahrabani from Com.X spoke of the film’s ambition to sit up there alongside serious animated fare such as WALTZ WITH BASHIR and PERSEPOLIS:

“Animation and comics can tackle any subject in the world. Ross’s book walks the same line as Harvey Pekar’s AMERICAN SPLENDOR series and Aneurin Wright’s THINGS TO DO IN A RETIREMENT HOME TRAILER PARK, works that look candidly and personally at life, family and death.”

The LA Times described Seeds as:

“A tribute to every father-son relationship. Seeds is an honest, inquisitive and candid memoir.”

Further information about the writer-director team behind the project, as well as pre-production artwork, will be issued soon.

In July 2009, Ross Mackintosh learned that his father had cancer. Seeds is the autobiographical story of one man’s experience of family, life, love and death. Beginning with the diagnosis, then taking us through the journey of his father’s eventual decline, it is a powerful account combining humour, philosophy and honesty.

Com.x is the UK’s most exciting comics house. Its releases include classics such as THE LAST AMERICAN and CLA$$WAR, and new cult favorites 45, BLUESPEAR and MONSTER MYTHS.