Birmingham, England has been called the birthplace of Heavy Metal.

However, though musically the city of Birmingham has stood in the shadows of both London and Liverpool as landmark cities in the U.K.’s rich musical timeline, it is just as illustrious, culturally vibrant and hugely important.

Birmingham’s musical scene in the 60’s was second greatest to Liverpool and while no city anywhere produced an act as world changing as The Beatles, Birmingham gave music The Nightriders/The Idle Race with first, Roy Wood and then Jeff Lynne, both of who became huge stars. Wood joined The Move, enlisted Lynne and then the two eventually transitioned the band into The Electric Light Orchestra (Roy Wood then formed Wizzard). There was The Moody Blues, Traffic, The Spencer Davis Group and in the 80’s Duran Duran, among many other notable acts that came form Birmingham.

Meanwhile back in the 70’s as punk rock caught on with England’s disenfranchised youth, so too did Reggae, Ska, Rocksteady and Dub music, which was always a part of the fabric of the nation’s heavy Jamaican populace since the 60’s anyway, as well as what many teenagers that gravitated towards punk rock also grew up listening to. 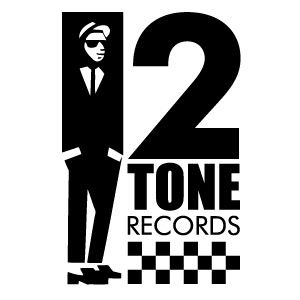 A new musical movement and record label called 2 Tone in nearby Coventry, England, was coined and spearheaded by Jerry Dammers, keyboardist for The Specials.


2 Tone embraced the music and clothing of early Jamaican ska bands, and included donning pork pie hats and black and white with skinny tie suits, plus added punk rock’s urgency, a fresh graphic design element (the 2 Tone logo was based on an old photo of Peter Tosh), and melded it all with a leftist political stance that attacked the issues of racism,and in general the right leaning heavy stances of Prime Minister Margaret Thatcher’s government.

See my previous Mystery Box piece here for further reading on 2 Tone and the influence of Jamaican music. 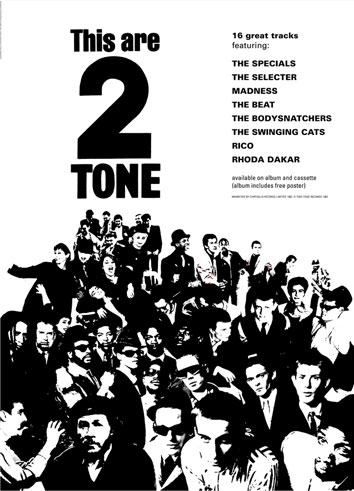 Being made up of friends, most of these bands were compiled on2 Tone Records, but also had releases on their own or other labels.

Along with The Specials, other new “Ska Revival” 2 Tone or 2 Tone influenced bands that were gaining popularity included Madness, The Selector, Bad Manners, The Body Snatchers, and the subject of this Mystery Box, Birmingham’s The Beat.

Dave Wakeling (vocal, guitar), Ranking Roger (vocals). Andy Cox (guitar), David Steele (bass), Everett Morton (drums), and Saxa (saxophone) formed in 1978, and immediately apparent was how great this band was, with a merging of styles, politics and melting pot sentiments. They too were caught up in the 2 Tone movement as well as being  friends with The Specials. Jerry Dammers helped by releasing their first single on his 2 Tone Records label.

The A side was a cover of Smokey Robinson and The Miracles’ 1967 hit “Tears Of A Clown” which, dare I say, not only is the best cover version of the song ever, I would also rank it as just as good as the original.

The B side was an incredible fast paced Ska number called “Ranking Full Stop”.

Because there was already a band releasing records in America called The Beat (a power pop act led by Paul Collins) for touring and releases in the U.S. the band became famously titled The English Beat and in Australia, the British Beat. 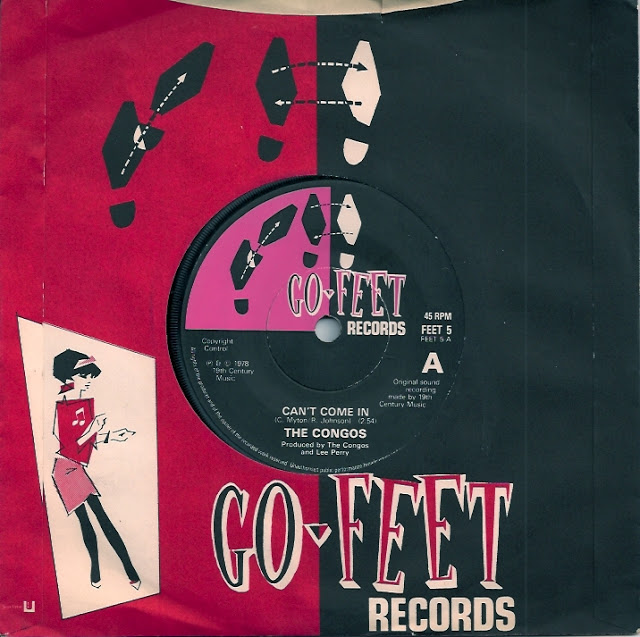 Since their pals were able to do it, the group formed their own record label called Go Feet and secured distribution through Chrysalis Records.

Highly unusual for a band only starting out, there was a top shelf quality to the song writing, the inimitable vocals of Dave Wakeling, the Jamaican-styled “Toasting” vocals of Ranking Roger and the tight interlocked clever musicianship. Here was an “X” factor that most bands could strive for but not always achieve, especially at the beginning. 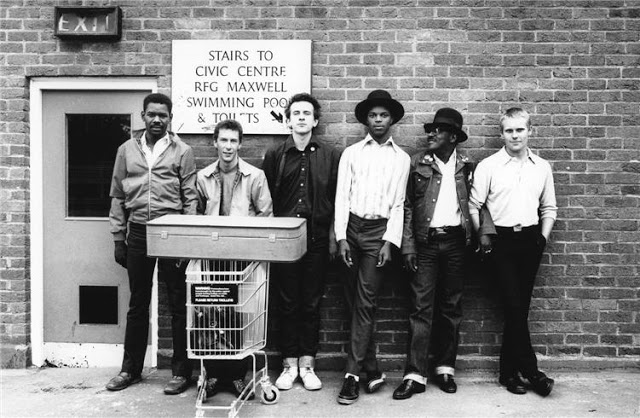 Dave Wakeling always mentioned that every band has three good albums in them, and somehow staying true to his opinion, The English Beat released three albums before calling it quits.

Their first is the album by which their entire career would (unfairly) always be measured 1980’s I Just Can’t Stop It. 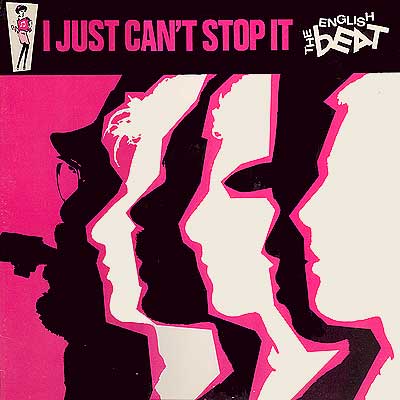 From first listen to this album, it seemed like a greatest hits collection rather than a debut album of new songs by a new band. The English Beat had the ability to run the gamut of ska, politics, punk pep through to classic pop songs. 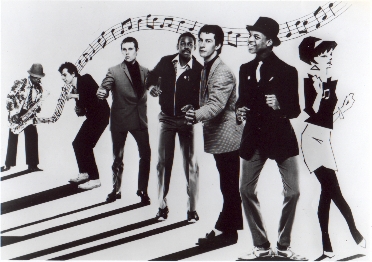 By choosing to create another superb cover with Andy Williams’ “Can’t Get Used To Losing You”  the band brought the easy listening genre to the table and showed there was little in the canon of popular music’s past that could not be made current, cool and decidedly timeless.

The English Beat‘s second album is a no less wonderful release. 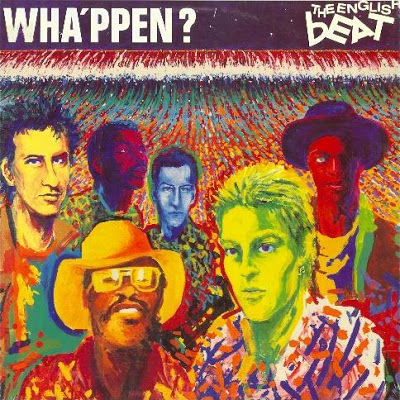 With 1981’s purposely titled Wha’ppen? the band refused to continue to sound exactly like their first album, instead expanding beyond ska and pop, taking in a wider scope of world sounds and embracing more of the other Caribbean music that went beyond Jamaica. With this album, even the music that hearkened back to the African styles that non Jamaican, West Indies immigrants had brought to the U.K. would be influential. Though always an overlooked album, sitting in the middle of the other two, Wha’ppen is equally just as great and is music made by true music fans.

Sadly, Wha’ppen? did not sit as well with British fans who wanted a repeat of the debut album, although it did chart the same in the U.K. and even better than that first album in the U.S.— this being a sign of where the band’s career would soon be headed.

By the time of the third album, 1981’s Special Beat Service, The English Beat were international stars, both through radio exposure and constant touring either to support giants such as David Bowie and The Clash or as headliners (R.E.M. opened for them!). They also added a couple of additional members to flesh out the sound with keyboards, percussion and extra horns.

With Special Beat Service’s slicker, more pop directed focus, the band was headed for a breakthrough.This is not to say they left their past sounds, or their past political stances behind or that it was too slick or pop orientated to seem as if they were a different band from the debut. In fact it only seemed as if growth here was actually an ok thing for a band. 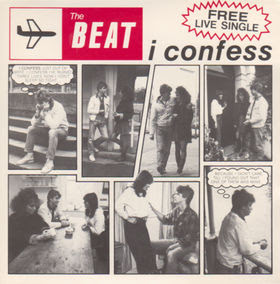 As a huge fan, I never once felt cheated or as if they gasp…sold out. With MTV‘s now dominant culture arriving full force, the band made a couple of videos for the three singles off the album resulting in a top 39 U.S. album and heavy rotation for the videos. They were now bigger in the U.S. then their homeland, and the three singles “Save It For Later,” “I Confess” and “Jeanette” became radio staples played to this day.

Staying true to the three albums is best prediction, the band called it quits in 1983. However, for members of the band the story did not end there.

All the members continued to perform music that was a variation of the English Beat‘s sound. 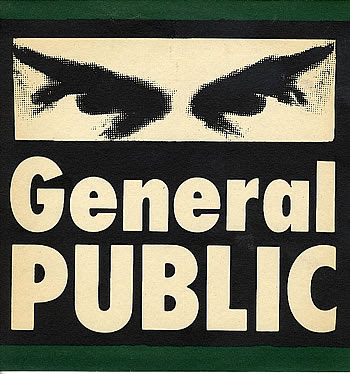 Dave Wakeling and Ranking Roger formed a super group of sorts with General Public and had two huge hits, their second single 1984’s “Tenderness” which shot to #27 and appeared in John Hughes’ Weird Science and Sixteen Candles (as well as Amy Heckerling’s Clueless).

Guitarist Andy Cox and bassist David Steele also left the band to do fairly OK for themselves. They formed Fine Young Cannibals with vocalist Roland Gift. With their second album The Raw and The Cooked, the trio achieved multi-platinum #1 status throughout the world. Not bad for a couple of working stiffs from Birmingham.

When Dave Wakeling moved to the U.S. he began touring with an all star ska band and continues to tour as The English Beat. I recently saw them on a rock and roll music cruise out of Boston and they were fantastic, and also included General Public singles and some fine Reggae covers.

Ranking Roger stayed in the U.K. where he amicably formed his version of the band called The Beat. He continually tours there and at some point I hope to be able to see them there.

Recently, Shout Factory released a box set called The English Beat: The Complete Beat, which includes remastered versions of all three stellar studio albums, essential non album singles and an extra 2 disc bonus with 12″ and dub versions of songs, three different BBC Radio John Peel Sessions (’79, ’89 and ’82) and a wonderfully rare set of 5 songs from live at The Opera House in Boston, 1982. Many of the tracks make their digital/CD debut here and the box neatly encapsulates the band’s history with crisply remastered detail, informative liner notes and fun photos/illustrations/original sleeve designs including the now iconic “Beat Girl”.

There is little sign today that the impact of The English Beat will leave us soon. Between its touring entities, songs appearing in films and other bands that continuously cover their songs. For instance, The Who performed “Save It For Later” twice on their mega 1989 reunion tour, Pete Townshend has covered the song numerous times on solo tours and Pearl Jam covered it for their 2011 tour.

As the new box set showcases so wonderfully, The English Beat stand tall as a group that more than successfully merged the then nascent 2 Tone sound and look into something fresh and larger—a grand, timeless and rewarding body of amazing music. Mixing in and writing about the human concerns of love, brotherhood, and politics, while practicing what they preached, the band turned out a fun musical stew that is never once heavy handed or dour.

Though a very long time coming, The English Beat: The Complete Beat, is a top notch collection for a legendary and absolutely worthwhile band.