There’s nothing better than taking in a good movie, with a popcorn and Coca-Cola in hand.

And thanks to our friends at Coca-Cola, we’re going to make that a reality with a Coca-Cola Carmike NASCAR Gift Basket which includes a $50 American Express gift card, as well as tell you how you can win a chance to win a trip for 2 to the 2013 Daytona 500!

Exclusively at Carmike Cinemas, you can purchase collectible cups of your favorite Coca-Cola Racing Family drivers including Jeff Burton, Greg Biffle, Tony Stewart, Ryan Newman and Danica Patrick. With each cup sale, Coca-Cola and Carmike will be donating money to the USO to support our troops and their families. Promotion is good now through September 30, 2012.

Plus, enter the Coca-Cola’s Carmike 2012 Sweepstakes now for your chance to win the grand prize which includes round trip air transportation for 2, 3 nights’ accommodations, rental car allowance awarded as a $300 Visa gift card, access  to the pre-race Spint FANZONE, 2 tickets to attend the Races; access to the 5th Turn Pavillion with catered food and non-alcoholic beverage on 2/24/13, 1 event program, and souvenir gift.

Details and rules on how to enter the Coca-Cola Carmike 2012 Sweepstakes can be found HERE. 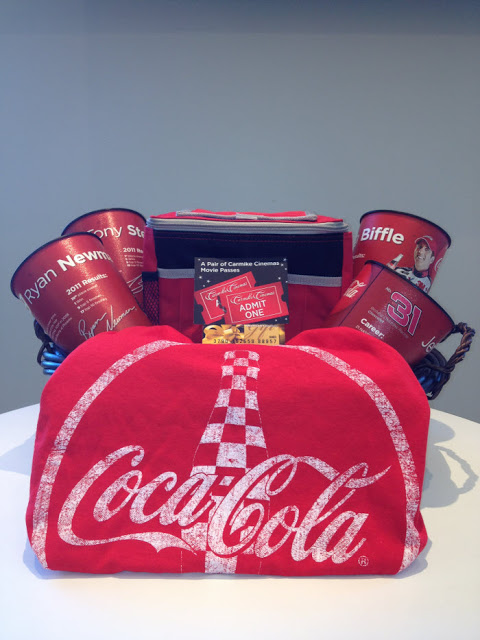 To enter, please send an email with the subject header “COCA-COLA CARMIKE” to
geekcontest @ gmail dot com and answer the following question:

Please include your name and address.  U.S. residents only.

The prize was provided by Coca-Cola. Neither Coca-Cola nor its program partners (NASCAR + Carmike Cinemas) are sponsors, administrators, or involved in any other way with this giveaway. All opinions expressed in the post are my own and not those of The Coca-Cola Company or aforementioned partners. Winner to be chosen by Forces of Geek.