This 1953 Western is 86% fresh on Rotten Tomatoes, where 74% of the audience report liking it.  It’s a bit too old to have a Metacritic score, but it’s relevant today because it’s been digitally remastered.

I got a chance to catch it in widescreen on AMC, and I was glad to watch it again – even if it wasn’t in 3D. 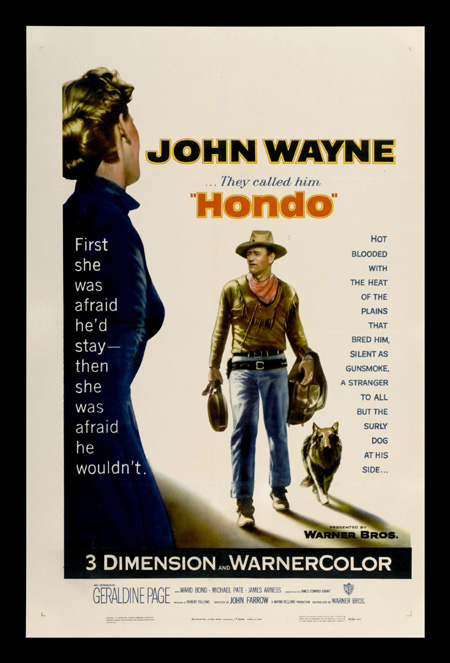 Yes, Hondo was originally shot in 3D, and there are several scenes in the movie that were clearly meant to take advantage of that format.

Synopsis
In 1870 New Mexico, the Chiricahua Apache under Victorio (Michael Pate) are on the warpath. Courier Hondo Lane (John Wayne) witnesses Victorio wipe out a cavalry troop and rides his horse to death trying to get the news back to the US Army. He walks out of the desert into a homestead, where Angie Lowe (Geraldine Page) and her son Johnny (Lee Aaker, star of TV’s Rin Tin Tin) are waiting for her husband to return. Try as he might, Hondo can’t get the Lowes to pack up and head for safety. Will the Army arrive first, or the Apache?

Verdict
If you can get past the corn of the period marketing, there’s a tense love story here with rich, complex, characters.

My wife had an opinion about John Wayne. She thought he was a corny, clichéd, actor who didn’t make any good movies until he was old and fat. Hondo is one of the movies that showed her there was more to the Duke’s career than the simple oaters the studios forced him to make when he started out. 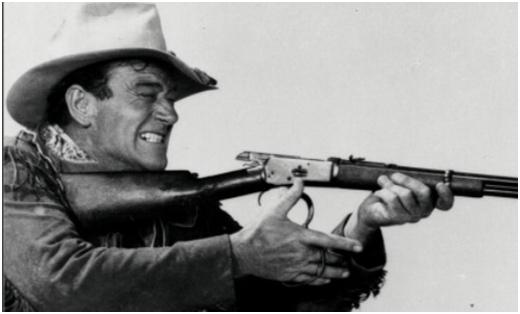 In 1953, the Marion Morrison was 46 years old and on his second of three marriages. He already had the John Ford cavalry trilogy (Fort Apache, She Wore a Yellow Ribbon, and Rio Grande) under his belt, as well as war movies like Sands of Iwo Jima. He and John Ford had already made The Quiet Man (which should have been on my list of Greatest Movies), and Hondo was his fourth movie of 1953.

So he was an experienced, hard-working, actor by this time. Unfortunately, that also meant that he had a specific image that the studios used to sell his movies. That image made it harder for him to find a variety of roles. He got lucky with this one. 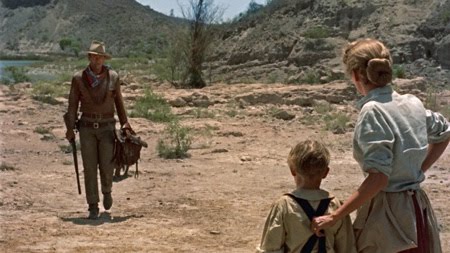 Hondo Lane isn’t just a starring role, it’s the core of the movie. Hondo lives by his values. He’s honest, and he’s independent, and he’s got the skills and toughness to back those values up.

Like John Wayne, Hondo had already been married once when he meets Angie. Hondo’s first wife was a Comanche woman, who passed away. He knows and understands love, and yet his feelings for Angie sneak up on him.

She certainly doesn’t treat Hondo well. She lies to him. She pulls a gun on him. Like Hondo, she’s trapped by her situation. She’s a woman, alone, on an isolated farm. Hondo is a stranger. She does what she does to protect herself, and Johnny. Over time, she realizes that Hondo is a genuinely good man living in a hard situation, and comes to trust him.

These characters drive the action of the film, and you’re almost disappointed when issues with the Army of the Apache intrude on the story of Hondo and Angie. Intrude they do, though, led by actors like Ward Bond and James Arness.

Victorio, for his part, gets far more character development than most Native American characters in Westerns of the period. He is not a cardboard cutout of a bad guy. Like Hondo, Victorio lives in a world that’s changing, and that no longer values the same things he was brought up to respect. His values lead him into inevitable conflict with the US government and the Army. His losses fuel his anger, and drive him forward, but don’t blind him to the courage of a boy protecting his mother. 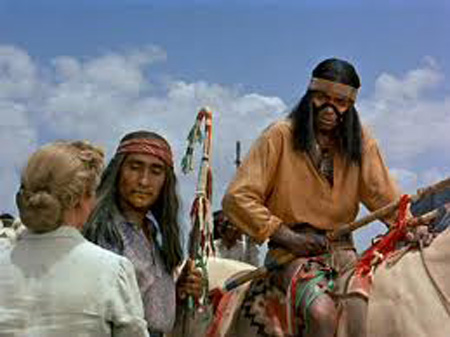 Lurking under the corny marketing and the simmering love story is a meditation on values and change. Hondo can survive in the changing world because he is capable of change. Angie brings that out in him. Victorio, on the other hand, would rather die true to himself and his traditions than change.

Who’s to say which is the better way?

Watch the digitally remastered Hondo and decide for yourself.