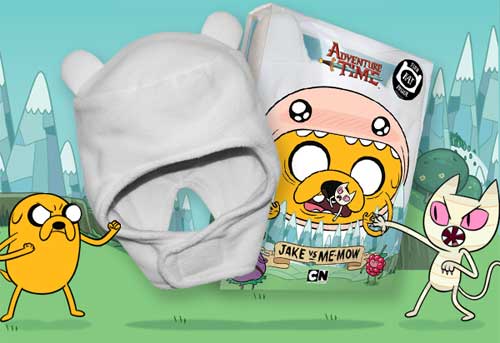 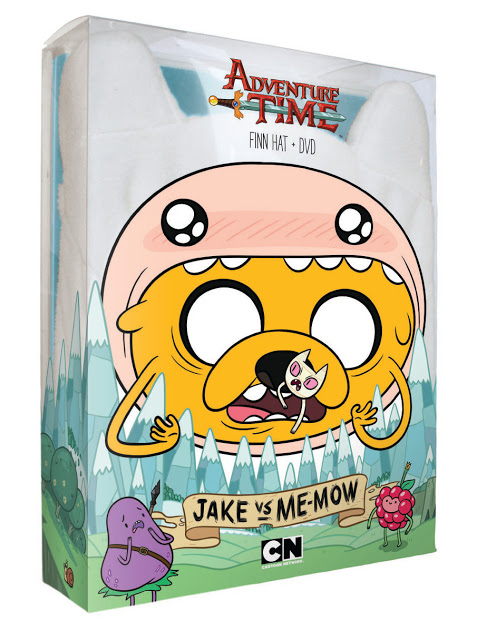 This October, fans of Cartoon Network’s smash hit series, Adventure Time can own a collection of their favorite episodes PLUS the iconic hat worn by one of its stars! Continuing its plan to release both episodic and full season releases to provide offers for fans of all ages, Cartoon Network announced the latest release in the Adventure Time DVD library, Adventure Time: Jake vs. Me-Mow! Featuring 16 episodes from the series’ first four seasons, this must-have DVD bundle is the ultimate gift for any Finn-loving fan as it comes packaged with the character’s iconic bear-hat – which regularly retails on its own for $20. Fans can own nearly three hours of content and a super rad hat perfect for Halloween, holiday or cosplay – for just $24.98 beginning October 2, 2012.

Along with a Land of Ooo character gallery bonus feature, the list of episodes included in the Adventure Time: Jake vs. Me-Mow! DVD is:

Adventure Time: Jake vs. Me-Mow! is the latest DVD release from the brand, which includes the best-selling, recently-released – not to mention bonus-filled – Adventure Time The Complete First Season DVD, as well as episodic releases, Adventure Time: My Two Favorite People and Adventure Time: It Came From the Nightosphere, all of which are currently available at retail. These DVDs join a robust line of consumer products for the brand across a range of categories across all major retailers, including toys, apparel, accessories, comic books, costumes, posters, youth electronics, posters, publishing and much more. The brand’s highly-anticipated, first-ever interactive game, Adventure Time: Hey Ice King! Why’d You Steal Our Garbage?! from partner D3Publisher will also debut at retail this fall for the Nintendo DS and Nintendo 3DS handheld systems.

Created by Pendleton Ward, the Adventure Time television series is an original animated comedy from Cartoon Network that follows the everyday adventures of unlikely heroes Finn the Human and his best friend, shape-shifting dog Jake, as they travel across the Land of Ooo and encounter its unique inhabitants. Whether it’s saving Princess Bubblegum, defeating zombie candy, mocking the “oxy-moronic” Ice King, or rocking out with undead music wiz Marceline the Vampire Queen, with Finn & Jake it’s always Adventure Time! New episodes of the Emmy® Award-nominated series debut on Cartoon Network on Mondays at 7:30 p.m. (ET/PT), with replays throughout the week.