AND OTHER TRUE TALES OF HAUNTED HIGHWAYS, WEIRD ENCOUNTERS, AND LEGENDS OF THE ROAD
Edited by Annie Wilder
Read by Tavia Gilbert and Peter Ganim
TRUE FIRST-PERSON ACCOUNTS OF STRANGE ENCOUNTERS

ON THE HIGHWAYS AND BYWAYS OF AMERICA! 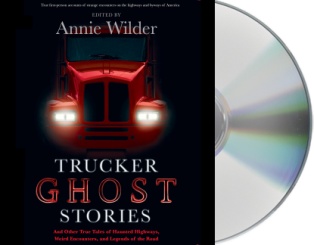 Women in white, wandering soldiers, and phantom hitchhikers haunt the
darkened and deserted roadways of the United States. Truckers, men and
women who have driven millions of miles of highway lit only by the twin
beams of their rigs’ headlights, have long reported
sightings of unusual or ominously strange, uncanny visions, mysterious
apparitions, and roaming spirits of the dead.
Voices from the road tell of visits from ghostly passengers and angry
demons; a detour onto a phantom highway; and warning text messages from
dead family members. From skinwalkers in Arizona to the restless dead
risen from a Kentucky cemetery; from a rural
Wisconsin bridge haunted by a bloody specter in a bridal gown to the
Southwest’s Route 666, the “Highway to Hell,” these first-person,
eyewitness accounts are filled with incidents that cannot easily be
explained away.
Compiled by House of Spirits and Whispers author Annie Wilder,
these histories have been contributed by those who experienced them:
long-haul truckers and other travelers who capture the raw emotion,
unsettling fear, and eerie truth of encounters with
spirits and other entities on the roads we all travel.

Narrated by the very talented Tavia Gilbert and Peter Ganim, the
chilling and unbelievable stories related in this audiobook come to
life, and linger in the listeners’ minds for hours after they have
finished.

Our friends over at MacMillan Audio have provided an audio excerpt from one of the stories.

Take a listen…if you dare.