This September, Chronicle Books Takes You Inside HBO’s Game of Thrones
Arriving In Stores September 25th 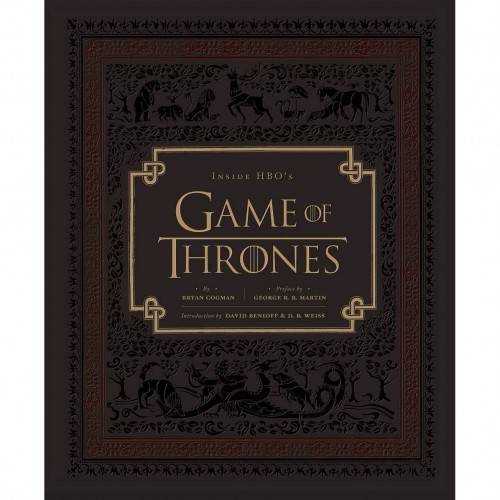 Millions of fans worldwide have fallen under the spell of Game of Thrones®, the hit television series based on the best-selling A Song of Ice and Fire novels by George R.R. Martin. With season two over and anticipation for season three building, fans can satisfy their Westeros cravings with Inside HBO’s Game of Thrones, the only official behind-the-scenes book about the series.

In the A Song of Ice and Fire series, Martin creates a massive, realistic fantasy realm that was almost impossible to film. Inside HBO’s Game of Thrones explores how the Game of Thrones team brought this vivid, rich world to life by showcasing concept art of the sets, props, costumes, as well as gorgeous photography of the action both on screen and off. Author Bryan Cogman, one of the show writers, interviewed cast and crew members to capture the unique stories that unfolded during the remarkable production of the first two seasons. Fans will discover how locations in three different countries were combined to bring King’s Landing to life, how the iron throne was created, and how the dramatic “crowning of Viserys” was filmed.

Cogman also breaks-down the vastly complex world of Westeros with character profiles, family trees, and historical summaries. The lavish, full-color book includes a foreword by Martin, an introduction by the series creators David Benioff and D.B. Weiss, and an explanation of the Dothraki language that was created exclusively for the show.

The 192-page book not only reveals numerous behind-the-scenes details, it also collects 300 color photographs and artwork that shed light on the show’s creative process. Designed to reflect the look of Westeros with a distinctive, old-world treatment makes this book a luxe and collectible package.

Inside HBO’s Game of Thrones is an indispensable reference and desirable gift for fans who want to delve deeper into the characters and stories of this endless fantasy world.

In this article:Book News, Game of Thrones, Press Release